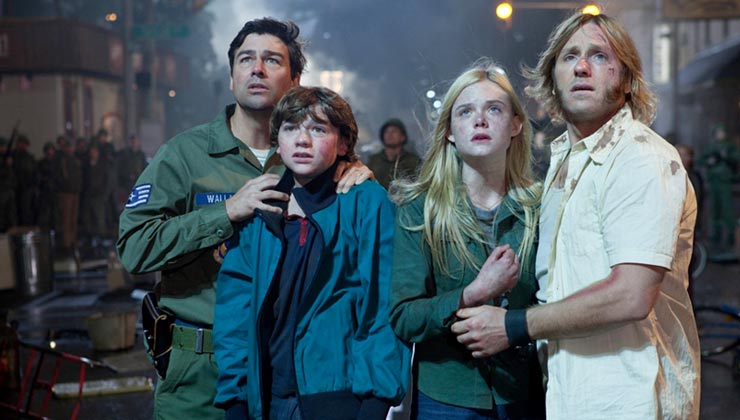 En español  |  You’ll wear your thinker out if you try to think up all the other-movie references in Super 8, the new sci-fi thriller from writer/director J. J. Abrams (Lost, Alias) and überproducer Steven Spielberg.

Set in the summer of 1979, it’s the story of a crew of lovable outcast kids who must grit their way through both an encounter with an otherworldly creature and the ominous threat of government thugs. But it is also, without apology and in equal parts, the progeny of The Goonies, E.T., Cloverfield, Close Encounters of the Third Kind, War of the Worlds, Stand By Me, The Fugitive and, believe me, by the time I finish writing this review I’ll have returned to this paragraph any number of times to add more.

But here’s the big surprise: This industrial-strength Mixmaster mash-up is, on its own terms, engaging, thrilling, terrifying and even touching. Abrams takes his time introducing us to the children and deftly defines their individual standings in the group. Then he plops us all down in the middle of the most breathtaking train wreck ever put on film, and that includes the humdinger Harrison Ford barely escaped in the aforementioned Fugitive.

From then on, Super 8 clicks along like, well, a runaway roller coaster.  As spectacular as the train wreck is, in its aftermath the kids see something subtly weird — and their suspicions are confirmed when they view the 8-mm home movie they inadvertently made of the crash.

In the mayhem that follows, Abrams treads awfully close to the limits of his PG-13 rating: Innocent small-town folks are violently abducted, dogs disappear, vehicles collide and forces both earthly and un- virtually destroy an entire Ohio town. In fact, the one flaw in Super 8’s storytelling is Abrams’s refusal to commit to the ultimate fates of many of those who are swept up in the violence. It seems suspiciously as if the deaths of some characters are so gruesome Abrams can’t even tell us what happened — and that perhaps he’s waiting to show us the awful truth in the eventual DVD extras.

Another surprise: Abrams, known primarily for twisting our minds with his offbeat TV shows and providing big-screen splash with films like Star Trek and Mission: Impossible III, proves himself to be a wonderful director of children. He draws a particularly fine performance from young first-timer Joel Courtney as the sad little boy who is swallowed up by the recent loss of his mother and is struggling to break through to his still-devastated father (played with disoriented affection by Kyle Chandler of Friday Night Lights).

While shamelessly cribbing themes from other movies, Abrams also unabashedly wields the well-worn tools of sci-fi suspense. We know … we just know what’s coming when the music goes dead silent and a character nervously croaks, “Is anybody there???” Hearing nothing, the poor sap finally shrugs in relief and, at that … very … moment, swift bellowing hell breaks loose. This happens in Super 8, I don’t know, maybe a dozen times. We know what’s up, Abrams knows we know what’s up, and yet each time he gleefully pulls the same trigger, and each time we jump in our seats.

It’s not a spoiler to reveal that Super 8 has a happy ending (at least for those we know are alive at the end); the Spielberg imprimatur assures us of that. But like the best of the master’s thrill rides — Jaws, War of the Worlds and Jurassic Park — along the way you’ll want to keep your hands and feet inside the car at all times.