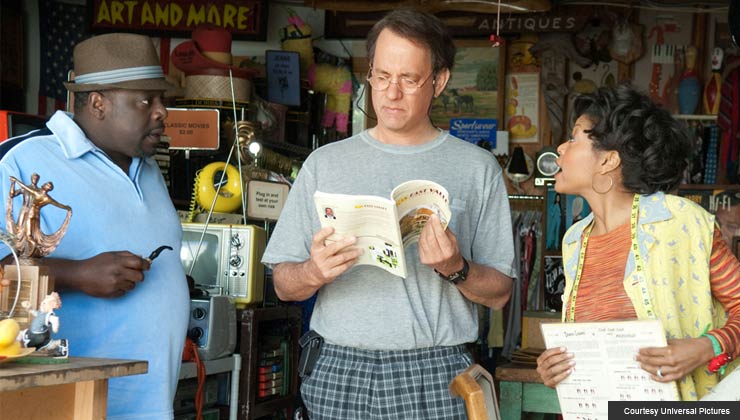 En español  |  Was it too much to have high hopes for Larry Crowne, the latest film from two-time Oscar-winner Tom Hanks, who not only stars, but writes (with Nia Vardalos of My Big Fat Greek Wedding), directs (his second big-screen effort after 1996’s That Thing You Do!) and produces? Was it too much to think that he and fellow mega-watt luminary Julia Roberts — his costar in 2007’s Charlie Wilson’s War — could make magic again?  Yeah, you’ll smile from time to time during Larry Crowne — you might even laugh, thanks to the exaggerated vocal antics of Star Trek veteran George Takei — but is that all there is?

Here’s the story:  A middle-aged divorced suburbanite, Crowne (Hanks) is happily toiling away in middle management at a Walmart–type chain when he gets downsized — sacked, really — because, having some years earlier chosen a stint in the Navy over college, he lacks the higher education the organization believes its leaders should possess.  He’s a lonely, dorky sort (to be honest, I personally think Hanks has exhausted his inner Forrest Gump by now) who’s upside down on his mortgage, regrets never having kids and seems to have few friends except his neighbors across the street (Cedric the Entertainer and Taraji P. Henson, working too hard for laughs), who support themselves by holding a perpetual garage sale in their front yard. What’s a guy to do?  Reinvent himself, of course, by going back to school.

The problem here is that, while the plotline is rooted in real life and promises happiness from heartbreak, it’s clear that Hanks has been too long ensconced in the unreal world of Hollywood to make any of what happens next ring true. To whit: Crowne befriends a beautiful and much younger fellow student named Talia ( Gugu Mbatha-Raw) when he parks the scooter he’s purchased to save on gas next to her at the community college.

Talia finds Crowne’s nerdiness charming, and takes on the job of making him hip. She oufits him with cool duds, rearranges the furniture in his place, even admits him to the scooter gang that she and her boyfriend ride in. Uniformly, Crowne’s classmates find him fascinating, and his economics and communications professors — Dr. Matsutani (Takei) and Mercedes Tainot (Roberts) respectively — discover that he’s an excellent pupil. Actually, Tainot isn’t initially impressed with Crowne, perhaps due to the mind fog she suffers during her morning class, thanks to her one-margarita-too-many-the-night-before habit with which she dulls the reality of her failing marriage. Her husband Dean (portrayed nicely by Bryan Cranston) is supposed to be home writing blogs while she teaches, but she knows he’s really surfing porn. Of course, the statuesque (we watch her from bottom to top in multiple scenes as she tucks her sensuous slender feet into stiletto heels), beautiful-as-ever, academic-minded Tainot bails on her marriage — no need for a spoiler alert, as it’s there in the trailer — and falls for her grown-up student (who, we learn in one uncomfortable scene with his young college friend, prefers briefs to boxers). Alas, while a Hanks-Roberts screen romance once seemed feasible, the chemistry is just no longer there.

At least twice in Larry Crowne, the camera freezes on Hanks, his face looking oddly 20 years younger than it should, his expression goofily puzzled, his taut eyes attempting to spill tears over either his folly or his good fortune.  Could it be Botox?  What Larry Crowne and Tom Hanks both need is to get real.