I'm either the perfect guy to review Star Trek Into Darkness or the worst possible choice: I confess that I have not sat through a Star Trek movie since Star Trek IV: The Voyage Home in 1986, where they went to San Francisco and Spock swam with humpback whales. And I hope I'm not just confusing that with some family vacation I once took.

So, I don't know much about the Star Trek mythology. That's probably why I was confused when the audience gasped and applauded and cheered at moments that seemed, to me at least, lulls in the action. Then again, I may be better qualified than most to judge Into Darkness purely on its merits as a movie. 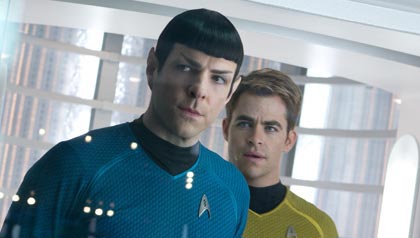 Chris Pine stars as a younger version of the Captain Kirk that William Shatner played back in olden times. He's more charming and funny than I remember Shatner being.

On the other hand Zachary Quinto, who plays Spock, is remarkably like Spock.1, Leonard Nimoy. In fact, there is a moment during Into Darkness when the uncanny resemblance between the two becomes utterly spooky (you'll know it when you see it).

In this installment, Kirk & Co. are sent to a distant planet to hunt down and kill a rogue officer (Benedict Cumberbatch) who has single-handedly nearly wiped out the top brass of Starfleet Command. On the way Spock raises all sorts of questions about the propriety of killing a guy without a fair trial, and for a minute there I was afraid Star Trek Into Darkness was going to beam us into a labored commentary on 21st century use of drones against U.S. citizens on foreign soil. Luckily the Klingons attack, shutting down the debate pronto.

Still, Kirk takes Spock's misgivings to heart and decides not to kill the target, but instead return him to what's left of Starfleet Command for a fair trial. He lives to regret that decision — but as a result of it, an awful lot of other people don't live very long at all. There are explosions and crashes and many scenes of people running. Director J.J. Abrams maintains remarkable control over the mayhem, which in some cases unfolds mano-a-mano and in others erupts on an epic scale.

The film also has enough light touches and whimsical references to the original Star Trek TV series to please even passing acquaintances such as myself. For example, I do a weekly Movies For Grownups show on YouTube, and I thought I was being funny when I ended my preview of Into Darkness by saying, "I hope there are Tribbles in it!" Well, guess what?

As you'd expect for a film series that's now in its 12th installment, Star Trek Into Darkness ends on a shameless join-us-again-next-time-same-time-same-channel note. And I must say I enjoyed it enough to catch the next one. Especially if there are more Tribbles.