If you have lived long enough to love enough and lose enough, then you won't be able to get enough of Pierce Brosnan and Trine Dyrholm as they enact the heartfelt middle-age love story that is at the center of Love Is All You Need.

See also: How to have a happy marriage

There are enough pretty young people and beautiful Italian Mediterranean settings to hold younger audiences, for sure, but make no mistake: Love Is All You Need is a love story for the rest of us. 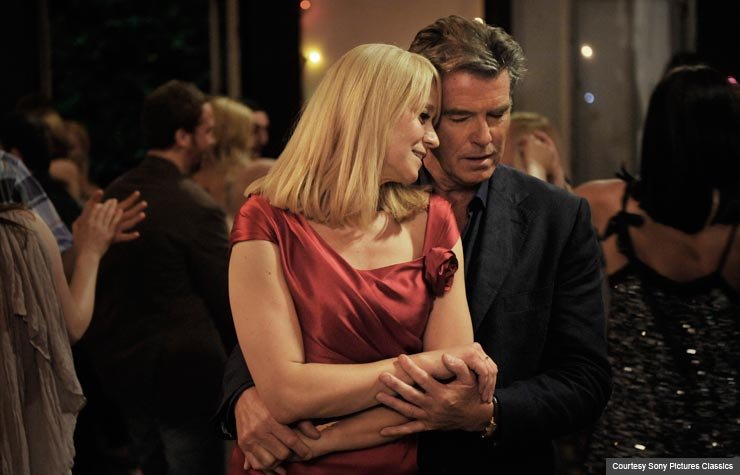 Trine Dyrholm and Pierce Brosnan in "Love Is All You Need."

It's that rare sort of narrative that explores how the mistakes and heartbreaks of the past can, in an ironic kind of cosmic math, add up to a brand of happiness that comes only to those of us who've seen the decades multiply behind us.

Brosnan is Philip, a British businessman based in Denmark, hardened by the loss of his wife years before. Trine Dyrholm — a Danish star whom I can best describe as an accessible Gwyneth Paltrow — plays Ida, a hairdresser who is just emerging from chemotherapy when she discovers her husband canoodling with his pretty accountant.

Philip and Ida meet "cute" at the airport on the way to a wedding in Italy, which they discover involves both of their children: his son the groom (Sebastian Jessen) and her daughter the bride (Molly Blixt Egelind).

The attraction between them is immediate, of course — although Philip is too distracted by his produce import business to take notice. But Ida brings him out of his shell, and he brings her to the realization that she deserves better than the life she is willing to accept for herself.

Of course there are the expected pre-wedding dustups and revelations, few of which are as engaging as the developing romance between the two lead characters.

Brosnan has aged magnificently, his voice taking on an appealing huskiness, his face crinkled in all the right spots. Dyrholm has the more difficult role as a woman who is vulnerable in any number of ways, yet belatedly determined to define her own future. As these two dance cautiously around each other, they slowly shed the scales insulating them from the rest of the world and call upon their lifetimes of experience to summon up a future neither could have imagined.

Brosnan's presence aside, Love Is All You Need is a Danish film, directed by the visionary Susanne Bier, whose In a Better World won the Best Foreign Language Film Oscar in 2011. Half of the film is subtitled as the Danish and Italian characters speak their mother tongues, but I feel like the superimposed words are superfluous. The universal sentiments and timeless truths at the heart of Love Is All You Need require no translation.