Director Richard Linklater's third film in a trilogy about the relationship between an American man and a French woman comes within striking distance of speaking a language the 50-plus Movies for Grownups demographic will understand, as main characters Jesse and Celine are in their 40s now.

Even if you missed the first two installments — Before Sunrise, when 20-somethings Jesse and Celine meet on a European train and spend a night together, and Before Sunset, when the pair, now in their 30s, reconnect — you'll recognize the distance this couple has traveled, and relate to their concerns about their growing kids and the conflicts that inevitably arise between longer-term couples. For that, Before Midnight is something of a marvel, a very real exploration of the intricacies of a romantic relationship. 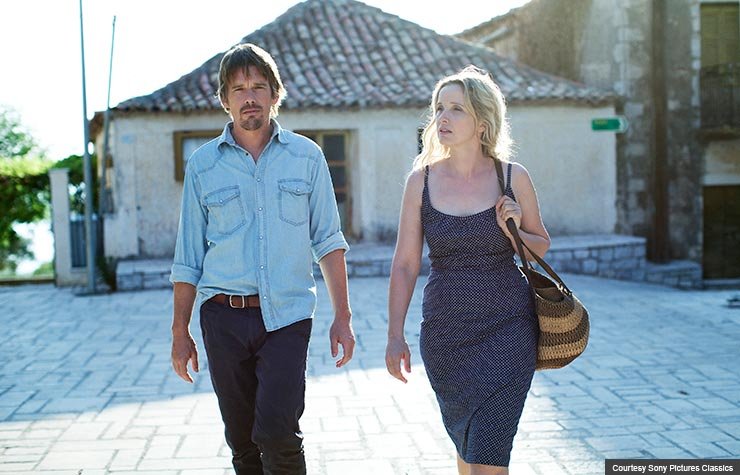 Stroll through the long-term relationship of Ethan Hawke as Jesse and Julie Delpy as Celine in "Before Midnight."

Other characters populate the latest Linklater film; there's Jesse's adolescent son from his first marriage, and Jesse and Celine's young twin daughters, along with an elder British writer and other assorted guests at the writer's Greek isle home, where Before Midnight is set.

But the ones who matter are Jesse, played by Ethan Hawke, 42 in real life and recently in Brooklyn's Finest and Before the Devil Knows You're Dead, and Julie Delpy, 43, of 2 Days in Paris and 2 Days in New York.

Long, dialogue-rich scenes — including a 15-minute car ride during which the pair intelligently and energetically banter back and forth, and 30 minutes in a hotel room where they devolve into a very heated argument — are mesmerizing, and truly authentic in part because Hawke and Delpy, who contributed to Linklater's screenplay, drew from their own experience.

That's not to say the material was ad-libbed in any way, though it may sound as if it could be on reality TV. Linklater, Hawke and Delpy went over the script repeatedly, and the two actors rehearsed every line, so that the rhythms, crescendos and crashes of their discourse come off like a musical masterpiece.

In some ways, Before Midnight reminded me of the one-act-play-turned-2011 movie Carnage, starring Jodie Foster, Kate Winslet, Christoph Waltz and John C. Reilly, in which two sets of parents meet in one set's Brooklyn apartment living room and enter into a seemingly unending argument about how one couple's kid injured the other's.

The difference here is that the exchanges between Jesse and Celine tap the deep emotions and frustrations that those of us who have been in a long-term relationship, regardless of social class or economic standing, have come to know.

On the other hand, the two sets of parents in Carnage are all just bickering about concerns of the overly rich and over-indulged.

Through it all, Before Midnight offers viewers the armchair Greek island experience. Not to mention that Hawke is mighty easy on the eyes, and Delpy, Frenchwoman that she is, is delightfully intriguing as well.