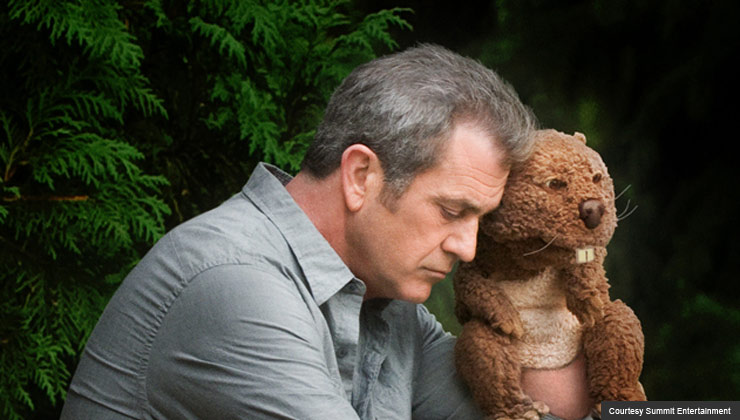 Mel Gibson stars in 'The Beaver.'

En español  |  In less skilled hands, The Beaver could have been a disaster.  The film takes up a thoroughly sober subject—the travails of a middle-aged family man suffering from an unrelenting clinical depression—but, at least initially, gives it a humorous treatment.

After an unsuccessful suicide attempt, toy company executive Walter Black (Mel Gibson) attempts to cope by wearing a beaver hand puppet and communicating through it with family and colleagues (in a Cockney accent to distinguish the beaver’s voice from his own voice). He even takes the beaver to bed with his wife, Meredith (Jodie Foster, who also directs).  In what could have been a maudlin choice, Foster cast her friend Gibson, who has clearly done battle with his own inner demons recently. In early screenings of the film, Foster asked audiences to put aside their personal opinions about Gibson based on tabloid reports they’d read about his private life.  She didn’t need to. Gibson, in one of his best performances ever and perhaps by drawing from deep within, disappears into his character and conveys the authentic heartbreak of mental illness, as well as the resolute joy that comes with beating it—making The Beaver a movie that none of us should ignore.

Foster took up the project after reading the spot-on script by newcomer Kyle Killen. She says that she was struck by both the wit and the starkness of the emotion the story communicated, but also says, “I love exploring the intricate tapestry of family connections.” For while The Beaver zooms in on one individual’s experience of depression, it also conveys a much-too-frequently-overlooked message: The disease impacts everyone around the sufferer, starting with his family. Here, Meredith can barely stand to endure another day of her husband’s gloom, but still she loves him.  Their teenage son Porter, skillfully portrayed by Anton Yelchin (Star Trek, Terminator Salvation), simultaneously grieves the loss of the father he once knew and resents the genetic ties that connect them. Meanwhile, adorable younger brother Henry, played by Riley Thomas Stewart (you may remember him from the new 90210 TV series), bonds with hid dad’s alter-ego beaver, and they relate happily as never before.

In a subplot that ultimately helps determine how the Black family will, or will not, emerge from their trials, screenwriter Killen introduces Norah, a high school love interest for Porter, played by the very talented Jennifer Lawrence (nominated for an Oscar for her performance in last year’s Winter’s Bone).  Perfect on the surface, Norah, it turns out, has experienced her own crises, and it’s through their shared pain that she and Porter, and everyone else in this tale about human relationships, get through.

Foster considers The Beaver a parable, and her bold use of changing tone throughout the film deepens the viewer’s experience. We open with Black, alone, floating almost as if dead in a pool.  The light, the humor, comes when Black takes up his beaver puppet. Foster says that she chose Gibson for the role of Black because he understood the tragedy in comedy; obviously, so does she. And so, the slapstick fades as Foster draws out the humanness from each of her actors, and offers up an honest portrayal not only of depression but also of the healing power of human interaction.

Sadly, if it weren’t for those tabloid reports, The Beaver would be a shoo-in for big box office and multiple awards nominations. But a more accurate measure of the success of film will be how many people’s lives it saves.  There are a whole lot of sufferers of depression out there, and even more who know and love them.  Thanks to The Beaver’s socially active financier, Participant Media, moviegoers will see a note at the end of the film’s credits directing them to a website if they or someone they know needs help with depression. Go to it at www.takepart.com/thebeaver.