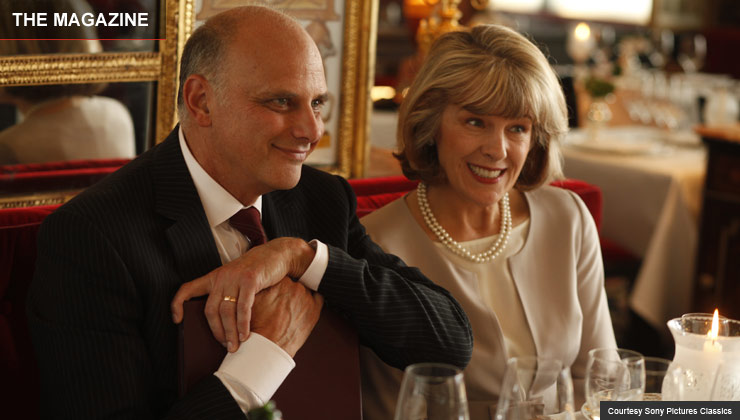 Kurt Fuller as John and Mimi Kennedy as Helen in Midnight in Paris.

En español  |  A sweet, tangy meringue that delicately balances romance, fantasy and satire, Woody Allen’s Midnight in Paris delivers much more than its frothy premise suggests. It starts out as a somewhat standard-issue Allenesque talkfest — a collection of richer-than-thou Americans alternately loving and loathing their stay in the City of Light — and then morphs into a head-spinning urban tall tale.

From the start, we recognize the usual stable of Allen character prototypes: There’s Gil, the uneasy protagonist (Owen Wilson, an able stand-in for Woody himself); Inez, the beautiful but annoying fiancée (Morning Glory’s Rachel McAdams); her privileged dry-as-brut parents (Kurt Fuller and Mimi Kennedy); and others. For the first half-hour, as Gil whines about how he hates his life as a TV writer and longs for the romance of Paris in the 1920s, we wonder if this film will be anything more than 90 minutes of Woody rumination.

But suddenly, as a tipsy Gil wanders the dark streets and the Parisian clocks strike the witching hour, Midnight in Paris becomes a different movie completely. Allen turns his usual conventions upside-down, and if it’s true that this is not quite the movie we came to see, it’s a welcome hijacking. The trailers and posters seem to go to great lengths to keep us from getting in on the joke too early, and I’m going to respect that here. But I will note that the published list of characters includes the provocative names of Salvador (a wild-eyed Adrien Brody), Ernest (an intense Corey Stoll) and a struggling young artist named Pablo (Marcial Di Fonzo Bo) — all of whom gather in the parlor of an American writer named Gert (Kathy Bates).

With the same playful touch that he conjured for his dreamlike The Purple Rose of Cairo and Everyone Says I Love You, Allen lifts his characters from the doldrums of daily life and sets them down in something that can only be described as magical. Those of us who longed for the return of “Funny Woody” in the wake of his masterful, if ultimately gloomy, Cassandra’s Dream, Vicky Cristina Barcelona and You Will Meet a Tall Dark Stranger will get what they wish for in Midnight in Paris. That, and a whole lot more.