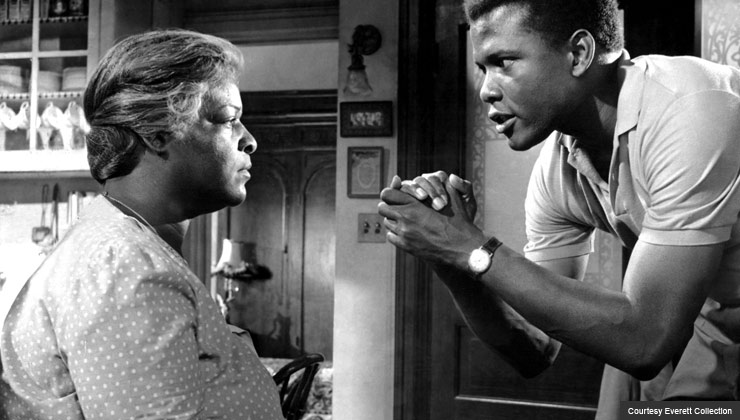 I can't say with total precision what $10,000 could buy 50 years ago, but from childhood memory I know that in 1958, a new Cadillac dented your bank account by four grand. From this, we can see how much of a life-changer $10,000 would have meant to the African American family in Lorraine Hansberry's landmark 1959 play A Raisin in the Sun, whose screen version was something of a landmark itself when it opened 50 years ago this spring.

See also: If you like A Raisin in the Sun, see these films, too.

In what was then the latest boost to his escalating screen career, Sidney Poitier played patriarch-by-default Walter Lee Younger — getting older at 35 and working as chauffeur to a white employer. Walter is borderline desperate to invest his late father's insurance check in (he hopes) a lot-improving liquor store — agitating his religious mother (Claudia McNeil, who, like Poitier, recreated her Tony-nominated stage performance). There's also the competing med school aspiration of sister Beneatha (Diana Sands) — itself risky given her flighty history of tackling self-improvement "projects," such as horse riding or guitar lessons, then quitting.

The family's raucous monetary squabbling sounds universally middle class — or at least the kind engaged in by folks eager to attain that status. But black characters with these concerns were next to unheard of on mainstream screens half-a-century ago when Columbia Pictures, which released Sun, was also releasing Underworld U.S.A. and Gidget Goes Hawaiian.

Claiming "first" distinctions for major studio releases is dicey and usually courts correction. Just two years earlier, for example, United Artists had released Take a Giant Step — tiny but worth mentioning because it is, just as we speak, premiering on DVD as an "on-demand" title from Twentieth Century Fox Home Entertainment. Starring singer Johnny Nash and Sun's Ruby Dee as a housemaid who catches his eye, it had a predominantly black cast and dealt with the growing pains of a well-bred teenager of color.

Still. Until then, mainstream Hollywood had near-exclusively hired black casts for musicals or dramas with music (Hallelujah!, Cabin in the Sky, Carmen Jones, St. Louis Blues), or given black actors occasional good roles in films where whites were the primary focus (Poitier's own screen debut in 1950's No Way Out); or even cast white actors as blacks in dramas about racial "passing" (Pinky, Lost Boundaries). Taking his own giant step, Poitier had already been a "co-equal" groundbreaker. He'd played the best buddy of white fellow dockworker John Cassavetes in 1957's Edge of the City and gotten an Oscar nomination as Tony Curtis' chain gang "partner" in The Defiant Ones, which no black male actor had ever done.

But given its stage pedigree, Sun on-screen had a lot on its shoulders, even if the production was modest. Journeyman director Daniel Petrie (white, but working from a Hansberry screenplay) takes the action out of an all-purpose living room only a tad more than TV's The Honeymooners did. Characters simply come and go — among them the less sexy of two Beneatha suitors (played by Louis Gossett Jr., who'd later join Poitier as an Oscar winner) and a mealy-mouthed white rep from a "concerned citizens" council (perpetually meek John Fiedler) who would prefer that the Youngers not use the money to integrate a white neighborhood.

Sometimes, the setting seems too confined to bridle Poitier's flamboyance — though some argue that Poitier should have gotten nominated here. But as Walter's weary wife, Dee did earn a supporting citation from the National Board of Review, Petrie got a Director's Guild nomination and Sun won the Cannes Film Festival's short-lived "Gary Cooper Award" given for the "human valor" of a "film's content and treatment." In 2005, the Library of Congress' National Preservation Board selected it to the National Film Registry, an honor restricted to movies that matter.

There are a couple footnotes — one sad and one celebratory — beyond the play's 1973 musical revamping (Raisin) and a mostly forgotten 1989 TV version. The sad one is actress Sands' death from cancer before she got out of her 30s — which, in the cruelest of ironies, is the same fate that befell Hansberry. The other is that the first Broadway play ever written by a black woman rated an even better — and more cinematic — screen version in 2008 (available, like its '61 forebear, on DVD from Sony Entertainment). Originally aired on ABC-TV, it reunited the cast from 2004's Broadway revival and preserved the Tony-winning performances of Audra McDonald and Phylicia Rashad. But it didn't make as much history.