The story of a mercenary tracking a rare animal through a virgin frontier affords us a precious glimpse of two sadly endangered species: a Tasmanian tiger and a good role for Willem Dafoe.

Enter for a chance to win a Caribbean Cruise Getaway

Dafoe plays Martin David, a stone-faced, precision-obsessed hired gun who’s been engaged by a large pharmaceutical company to find, kill and bring back tissue samples of what may be the last living specimen of the tiger, reported to be wandering the impenetrable wilderness of Tasmania. The animal isn’t really a tiger at all, but a marsupial that resembles a cross between a dog and a kangaroo. The last known one died in the 1930s, but reports of scattered sightings in the wild have persisted.

For the story’s purposes, Big Pharma suspects the animal’s saliva contains a natural drug that paralyzes its victims. The stuff could represent the Next Big Thing in prescription drugs (“Ask your doctor if Tasmanian Tiger Spit is right for you”) — so off goes David, armed with a very cool rifle and a silver case of drool cups, to kill the critter and bring back a sample of saliva.

It’s all very hush-hush, of course, so David arrives in Tasmania claiming to be a naturalist sent by “the university” to study Tasmanian devils. Everyone accepts his guise, and no one seems curious as to just what university he represents. Oxford? Kaplan?

Happily, director Daniel Nettheim gets us beyond the improbable setup rather quickly. Soon we’re in the wilderness with David, tracking the elusive critter through dense woods, across surging streams, and over rock fields that seem positively lunar. It is in these long, silent passages that The Hunter becomes riveting. Nettheim focuses on the minutiae of life in the wild with a Hemingway-like eye for detail. By the time the two hours have passed, we, too, could loop together a snare trap, or spot faint paw prints in a muddy stream bank. Dafoe brings such a sense of patience and authenticity to his role that we often lapse into thinking of The Hunter not just as a high adventure, but as a documentary.

“Ask your doctor if Tasmanian Tiger Spit is right for you.”

Lovingly photographed by Robert Humphreys, Tasmania is a place of unmatched rugged beauty, of deep valleys, soaring mountains and endless plateaus. I can’t remember another film made there, and it’s easy to imagine that it might not be hyperbole when someone tells David no human has ever set foot where he’s going.

It’s when David makes his infrequent visits back to civilization, that the movie falters. David runs afoul of both local loggers, who suspect he wants to keep them from earning a living, and the area tree huggers, who instinctively know he’s not Grizzly Adams, either. 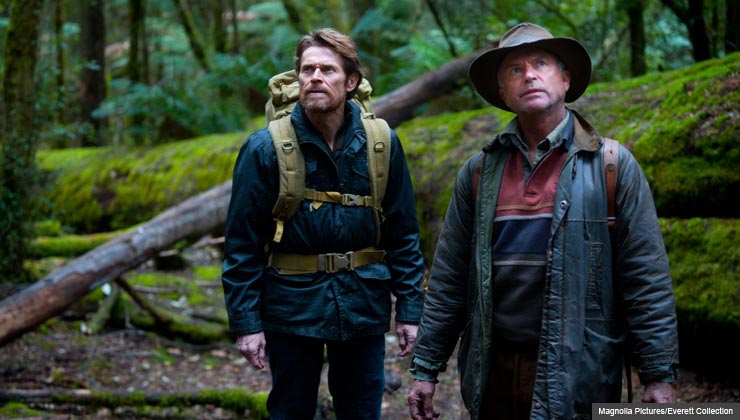 Willem Dafoe and Sam Neill in 'The Hunter'

These side trips dilute the raw immediacy of David’s adventure. He befriends a family (Frances O’Connor as the widowed wife of a real naturalist, Morgana Davies and Finn Woodlock as her adorable children) and a resident old fella (the always endearing Sam Neill) who seems to be David’s pal, but then again, might not be.

One moment David is huddling near a campfire, straining to read his topographical map under a torrential downpour; the next we see him stomping back into the living room of the family’s cabin, the electric lights offering a warm homey glow. Even glimpses of these relative comforts somehow make the perils of the Tasmanian outback seem more like a day at the office than life on the edge.

Happily, we never lounge in the warmth of hearth and home for long. Soon enough, we’re back on the trail of that tiger, where The Hunter does what all good movies do: It takes us to a place we’ve never imagined, and leaves us with images that linger long after we leave the theater.

You may also like: Harrison Ford Movie Quotes Quiz.

Have you seen this movie or do you plan to? Add your voice to the comments below. Or jump into a discussion with fellow film enthusiasts on our Movies for Grownups Message Boards.