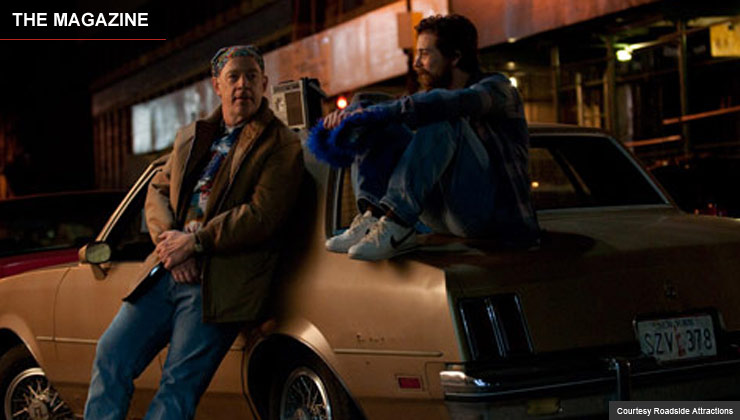 En español  |  Have you ever unexpectedly heard a once-cherished song and found yourself immediately transported back to some distant, random memory?

Most of us have — and that nearly universally acknowledged link between music and memory is the main reason why The Music Never Stopped, a charmer of an indie flick about a fractured family brought back together by music, works so much better than it has any right to.

A killer soundtrack of ’60s rock classics and a sterling central performance by the criminally underrated J.K. Simmons (who plays Dr. Emil Skoda in NBC’s Law and Order) certainly don’t hurt the movie’s chances for success, either. In fact, whenever first-time director Jim Kohlberg feels his uneven story listing off course — as it does more than once — he throws in a montage of Dylan, Dead and Beatles songs, or thrusts Simmons forward for a showcase scene. Kohlberg may be green behind the camera, but the man knows how to please a crowd.

The story jumps back and forth between the mid-1980s and the late 1960s, centering around Gabriel (Lou Taylor Pucci), an only child who runs away from his parents, Henry and Helen (Simmons and Cara Seymour), in 1967 as a 17-year-old rebellious boy and then reappears 18 years later as a disheveled, glassy-eyed 35-year-old man.

Upon his return, doctors discover a benign but massive tumor in his brain, the removal of which will likely cause significant brain damage. It does, stealing Gabriel’s short-term memory and severely limiting his long-term memory to things like his name and birthdate.

In flashbacks, we learn about the family’s shared love of music. Tensions arise as Gabriel’s teenage musical taste veers from Henry’s Bing Crosby records toward the Grateful Dead. Gabriel starts a band, grows his hair long. His old-school dad just doesn’t get it, man. There’s an awful fight. The son is ordered out of the house. He complies.

There’s a predictability to those flashbacks that doesn’t serve the movie very well. But the scenes in the movie’s present make up for it. Doctors find that music awakens Gabriel from his nearly catatonic state and may even help him build up his memory. But not just any music will do the trick — it has to be ’60s rock. How’s that for karma, Henry?

So the father, who desperately wants to reconnect with the son he sent away, must learn to love the music that drove them apart. Henry’s immersion course in ’60s music gives Kohlberg an excuse to spin an extraordinary playlist of songs that will be nirvana to boomer audiences. Music rights must have been the biggest line item on his budget.

The Music Never Stopped is based — loosely, from what I can gather — on a case study called “The Last Hippie” by Dr. Oliver Sacks, a pioneer in the field of music therapy whose work also spawned Awakenings, a film similar in tone, subject and style.

This story works only in fits and starts. The rules governing Gabriel’s memory condition seem to fluctuate to fit the necessities of the plot, and there are too many subplots introduced that don’t go anywhere. Seymour is largely wasted, and Julia Ormond, a terrific actress who shows up as the therapist who first discovers Gabriel’s reaction to music, suddenly disappears from the film altogether.

It’s left to Simmons to pick the movie up on his shoulders and make it work. And darned if he doesn’t pull it off. If you’re a regular moviegoer or TV watcher — heck, even if you’re only a casual one — you know who Simmons is, though his name may not ring a bell. In addition to his L&O role, he’s been a TV regular on Oz and The Closer. On the big screen, he’s had memorable turns as the hard-boiled newspaper editor in the Spider-Man movies and in an assortment of Coen brothers flicks.

The 56-year-old Simmons has never been better than he is here, as he transforms Henry from a guy burdened with regret to one bursting with hope. And it may be only April, but it’s hard to imagine that one scene in particular — which arrives toward the movie’s end and features Simmons in a tied-dyed T-shirt and matching bandana — won’t go down as one of this movie year’s most memorable.

The Music Never Stopped has its faults, but all those great songs can certainly cover up a few inconsistencies. One of the film’s neat tricks is the way it acts as its own form of musical therapy, leaving its audience awash in half-forgotten memories.