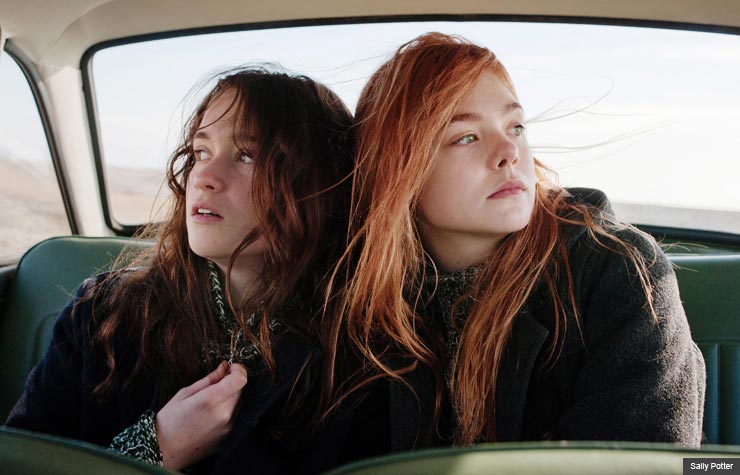 Ginger & Rosa is a small film that takes on some very large themes: the emotional intricacies of an intense adolescent friendship; the toll of the specter of a nuclear holocaust; and the cascading effects of self-righteous adult betrayal. The movie, a period piece, takes the audience back in time to explore these issues that likely have touched many of us in one way or another.

Written and directed by Sally Potter, best known for her version of Virginia Woolf's Orlando (starring fellow Brit Tilda Swinton), Ginger & Rosa is told poignantly through the eyes of Ginger, played by the enormously talented Elle Fanning (sister of Dakota), who was only 13 at the time of production.

Ginger and Rosa (newby Alice Englert, daughter of director Jane Campion) were born on the same day in 1945, as their mothers held hands in the maternity ward in the wake of the dropping of the bomb in Hiroshima. Fast-forward to 1962 London, during the Cuban missile crisis, and the girls, now 17, are inseparable best friends.

Ginger writes poetry and tags along at demonstrations held by the Campaign for Nuclear Disarmament. She's encouraged in her leftist leanings by her once-a-conscientious-objector father, Roland (Alessandro Nivola of Face/Off and Laurel Canyon), who is now a college professor and separated from Ginger's mum, Natalie (wonderfully portrayed by Christina Hendricks of Mad Men), thanks to his philandering ways.

Less interested in politics, the carnal Rosa, in rebellion of her strict single mom Anoushka (Jodhi May of A World Apart), teaches Ginger to smoke and to kiss boys. Plagued by anxiety that the world could end, Ginger finds rare pleasure in the company of Rosa and Roland, until the two most important people in her life begin an affair with one another, an act Roland defends as justifiable noncomformist behavior.

Potter's film style is a bit overly earnest and contemplative. Nonetheless, cinematographer Robbie Ryan does a fine job of re-creating London in the early 1960s, and of letting his handheld camera penetrate young Ginger's soul. (Again, Fanning's acting deserves no small credit here.) In supporting roles, Timothy Spall (Secrets & Lies) and Oliver Platt (X-Men First Class), who play a pair of gay "uncles" to Ginger, and their pal, the feminist Bella (none other than the great Annette Bening), offer some much-needed humor and enrich the plot.

Not a perfect movie, by any means, Ginger & Rosa nonetheless gets under your skin. What Potter has done here is realistically re-create the psychological pathos experienced by an adolescent during the Cold War era, while simultaneously showing how an adult uses that same political environment to excuse immoral behavior. Complex stuff, for a small film.