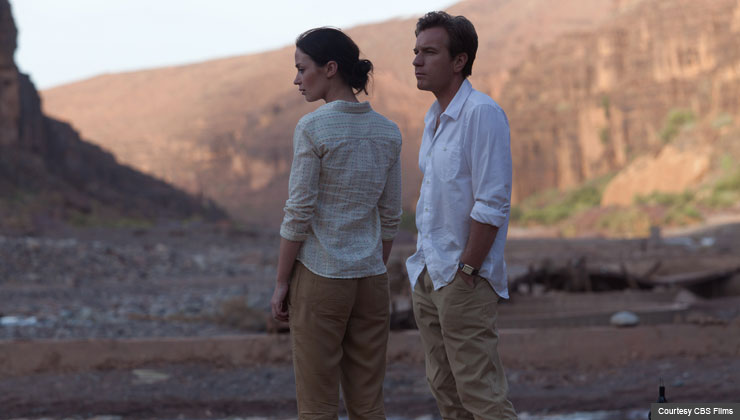 Ewan McGregor and Emily Blunt fall in love in Salmon Fishing in the Yemen.

From Simon Beaufoy, the Oscar-winning screenwriter of Slumdog Millionaire, comes this delightful and utterly original little film, Salmon Fishing in the Yemen. In fact, the movie is based on the 2006 best-selling debut novel by Paul Torday; adapting it to screen was no small feat, given that the book is written entirely as a collection of emails, letters and memos. With Beufoy’s light touch, and the skilled direction of Lasse Hallstrom (Chocolat), Salmon Fishing comes together as a compelling confection that will leave you smiling.

The backdrop for the plot is a seemingly preposterous but, in today’s world, legitimate proposition offered by a modern-day Yemeni sheikh to make his hobby of salmon fishing (practiced by the sheikh while vacationing at his estate in the Scottish Highlands) available to his fellow citizens in his conflict-ridden desert homeland. He will spare no expense to carry out this plan. The British prime minister sees the idea as a PR gold mine, sending a message of British-Middle East cooperation to the world in a time when only strife seems to make the headlines.

The prime minister, played just snarkily enough by Kristin Scott Thomas, assigns the task of making salmon fishing in the Yemen a reality to one of her country’s leading fisheries experts, Fred Jones (brilliantly portrayed by Ewan McGregor). Jones — his character appropriately quirky and nerdy — is initially disgusted by the ludicrous idea, but eventually he comes to share in the boyish dreams of Sheikh Muhammed (Amr Waked of Syriana).

Muhammed’s secret weapon is his adorable assistant, Harriet (portrayed by the equally adorable Emily Blunt). Harriet and Jones come together in the arid Arabian Peninsula (shot in a mountainous canyon in Morocco because of travel restrictions in Yemen) as two lost souls — Jones the henpecked husband of a self-absorbed wife, and Harriet the fretful girlfriend of a recently deployed soldier who has gone missing in action. The chemistry between them is palpable, if not a bit predictable. As key cast members come together to make a seemingly impossible dream a reality, the audience is treated to an experience we fully understand and live for.

What’s best about Salmon Fishing in the Yemen is that, however clichéd its characters and their ideas come off on the surface, intelligent, modern-day truths lie beneath. This is a film about the realities of politics, international relations, and the unstoppable human impulse to believe, to have faith and to connect with one another.

Have you seen Salmon Fishing in the Yemen? What did you think? Agree with our review? Comment on the article below, or take your opinion to our Movies for Grownups message boards.