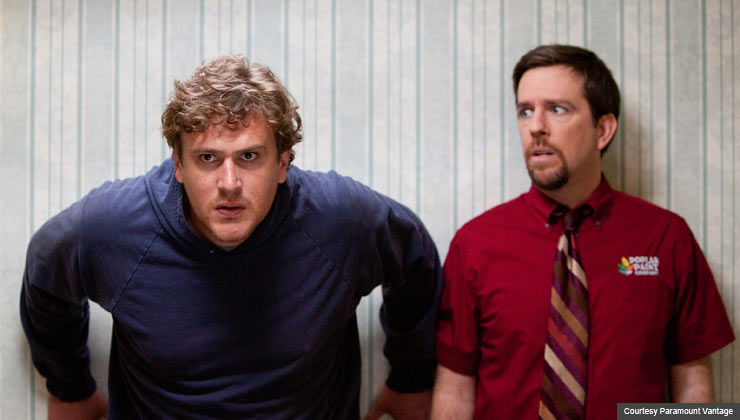 Alongside Ed Helms, Jason Segal comically looks for signs to move out of his mother's basement in Duplass brothers' Jeff, Who Lives at Home.

For 30-year-old Jeff (Jason Segel), the universe is sending him subliminal messages, and once he's deciphered the meaning of them he'll be ready to move out of his mother's basement.

For his older brother Pat (Ed Helms), the universe (with help from his wife) is conspiring to deny him happiness and fulfillment, a state of affairs that can only be resolved by buying a Porsche he cannot afford.

For Jeff and Pat's widowed mother Sharon (Susan Sarandon), the universe has condemned her to a life without love and the growing suspicion that her two sons are idiots.

Like planets in opposition, the three are locked in their orbits, and only their mutual gravitational pull prevents them from spinning into the void.

In Jeff, Who Lives at Home, we are invited to spend a day with these three — the very day they all learn hard lessons about their real places in the cosmos. As the hours tick by, we progress from being utterly unimpressed with them to laughing at their foibles, then sympathizing with their anxieties, and finally rooting for them to recognize the absolute rightness of where they are, right now.

It's Sharon's birthday, and when she calls her slacker son from the office, she has just one request: that he buy some wood glue and fix a broken slat on a door at home.  Jeff promises to do so, but there's a problem: His entire philosophy of life is modeled on M. Knight Shyamalan's sci-fi movie Signs — which, you may remember, involved a long series of far-flung coincidences that enabled Mel Gibson to defeat alien invaders. In other words, the slightest thing — a half-filled glass of water, a tossed-off phrase, a souvenir baseball bat — can in the end have the most profound implications in the course of your life.

Our annual look at the best in motion pictures. Read

It's a philosophy that has, in fact, left Jeff utterly paralyzed, looking for meaning in just about every little thing. On this particular morning, that thing is a wrong number, a phone call from someone looking for "Kevin."  As he takes a bus to the Home Depot to buy wood glue for his mother, Jeff spots a guy wearing a "Kevin" sports jersey. At that point, of course, all bets are off. Jeff jumps off the bus to follow Kevin, and his adventure begins.

Meanwhile, Pat has sprung that new Porsche on his exasperated wife (Judy Greer), and her less-than-enthusiastic reaction sends them both off in directions they'll come to regret before the day is out.

And Sharon finds her office instant messages chirping with flirtatious notes from "a secret admirer." She's intrigued in a way she hasn't been in years, but jumps to some logical conclusions that will, for a time at least, leave her feeling worse than ever.

That sounds like three divergent stories, but writer/directors Jay and Mark Duplass skillfully weave them together in a way that leads everyone not only to the same geographic location, but the same life-affirming revelation. That's a surprise for film buffs, because the Duplass brothers are pioneers of a film genre called "mumblecore," which generally involves meandering, unscripted scenes and little or no real narrative structure (you can go to Netflix for their earlier films The Puffy Chair and Baghead — on second thought, don't).

Jeff’s cause is helped immeasurably by its fine cast. Segal’s imposing physical presence, as always, renders his subtle, downright tender performance a series of constant surprises. Helms, who on TV this year has the thankless job of filling the void left by Steve Carell on The Office, starts out echoing his inexplicably self-satisfied television character, but soon bursts into a blossom of hysterically raw nerves. Of course, Sarandon cannot help but give a wonderfully nuanced performance, but she’s especially endearing as a lonely woman nervously nursing the notion that, at long last, she may be on the brink of romance.

This is the Duplass brothers’ second movie with real stars — Cyrus, with John C. Reilly, Marisa Tomei and Jonah Hill, was so dark I could barely find my way out of the theater. But Jeff, Who Lives at Home, comes with a big old heart and an infectious optimism to match. I like that a lot better than the darkness, and I have a feeling audiences will agree with me.

You may also like: Will Ferrell is silly in Casa de mi Padre.