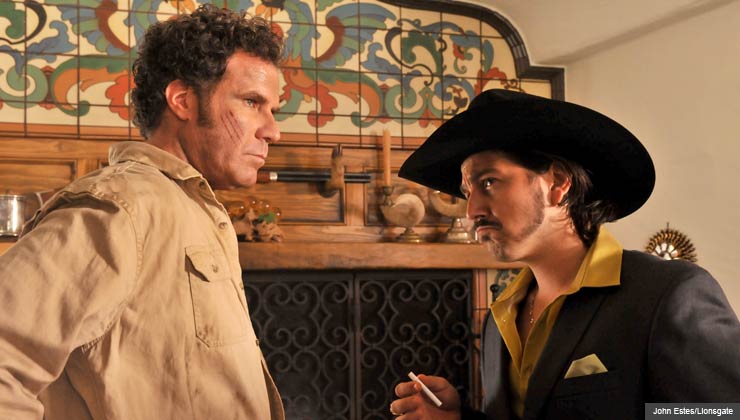 En español | Fans of over-the-top 1980s Mexican action flicks will flock to Will Ferrell's all-Spanish-language comedy Casa de mi Padre. The question is, after that first afternoon showing empties out, will the rest of us want to see it, too?

Simultaneously smart and stupid, Casa de mi Padre is so fond of its source material — a genre virtually no one in this country has ever seen — you can't help but be swept along, laughing heartily even at the jokes you don't quite get. Ironically, this hyperviolent, defiantly low-budget comedy owes a debt to last year's sweet-natured, slickly produced The Artist — both lovingly re-create types of movies nobody makes anymore, and both ask American audiences to remaster the lost art of reading dialog.

If nothing else, Ferrell deserves a medal for bravery. From the first frame, he is utterly committed to his south-of-the-border concept, delivering his lines in what sounds like, to the untrained ear, pretty good Spanish. He and director Matt Piedmont have created an ultra low-budget western, with production values just this side of your local high school AV club. Film stocks change, the focus is sometimes off, continuity is thrown to the wind (cigarettes and bits of apparel disappear and return between shots).

Most fun of all, the physical reels of film themselves, badly spliced, sometimes scratched and jittery, seem to have been rescued from some garage in Guadalajara (and if you think about it, in this age of digital delivery of pristine prints to even the most remote movie theaters, the mere notion of film reels is downright quaint).

Will Ferrell speaking Spanish, riding fake horses and engaging in outrageously bloody shootouts is a fairly good joke. To sustain that joke for 84 minutes is another story, and Ferrell, Piedmont and writer Andrew Steele do a remarkably good job of keeping the laughs coming.

Ferrell plays Armando, an honest, simple rancher whose family spread has become the focal point in a battle between two drug cartels — one of which is headed by his own brother (Diego Luna, costar of the Mexican classic Y Tu Mama También). A bloodbath erupts in scenes so ineptly staged and ludicrously grisly there is not one moment when you can suspend disbelief, even if you want to. The acting comes at a fever pitch, worthy of the most overwrought telenovela Univision has to offer. Every once in a while the action stops for a lively musical number (Ferrell joins in on a rousing "Yo No Se" and Christina Aguilera belts out the brassy, Goldfinger-style title song), and a surreal mystical vision sequence owes a lot to an even earlier icon of Mexican cinema, 1970's El Topo.

The international film-savvy folks sitting around me the other night laughed with delight at the endless ways Casa de mi Padre quoted familiar Mexican action movie motifs. Me, I've never seen a Mexican action film in my life. But I know funny when I see it.

You may also like: Join our Movies for Grownups message board. »