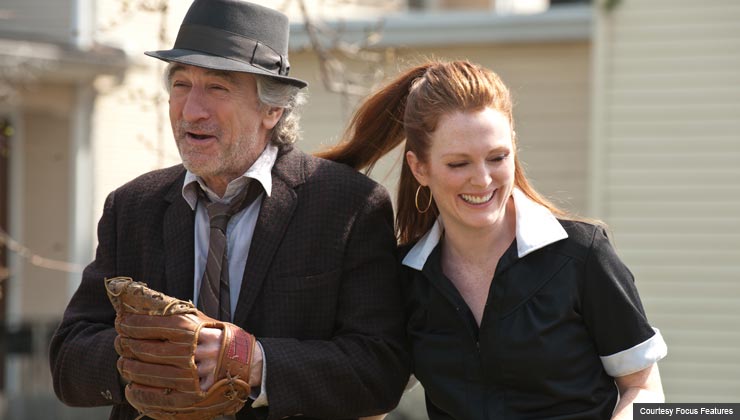 En español  |  Director Paul Weitz coaxes nuanced and quirky performances from his stars in this indie-feeling film, based on the impressive 2004 memoir, "Another Bulls—t Night in Suck City," by Nick Flynn. And while the material is rich, the emotional interplay between characters — especially the long estranged father and son — is somehow lacking.

Weitz, who was nominated for an Oscar (best writing, adapted screenplay) for About a Boy, cast Paul Dano (Little Miss Sunshine, There Will Be Blood) as the late-20-something dispirited wannabe writer Nick Flynn. Dano conveys the malaise you'd expect in a guy whose father, Jonathan (played by Robert De Niro) abandoned him 18 years earlier, and whose mother Jody (Julianne Moore) committed suicide when he was 22. His life brightens when he meets Denise (Olivia Thirlby of Juno), plunges into a love affair with her, and takes a job at the homeless shelter where she works. But Jonathan, also a wannabe writer and raging alcoholic with delusions of grandeur (a check-forging scam he hatched years earlier landed him in prison), has been evicted from his apartment and impulsively seeks out Nick, all these years later, for help. He offers no explanations for his absence, nor makes any apologies, leaving his son completely bewildered.

When Jonathan loses the cab he drives and ends up, literally, on the streets, he shows up at the shelter, sending Nick into a downward spiral of embarrassment, anger and drug abuse.

The story of Nick's close relationship with his mother is told mostly in flashback, and Moore does a terrific job of communicating the determination and desperation that often come with single-parenthood. Weitz distills what must have been some very painful adolescent years for Nick by flashing time-sequenced images of the boy playing catch with a series of Mom's boyfriends.

De Niro, who for too many years now has taken roles that underutilize his acting skills, digs deep for the complicated motivations that drive Jonathan. In more than one poignant scene — sleeping on an icy sidewalk grate in Boston, shaving in front of a pitted mirror in the grimy shelter — he shows the viewer how a man who's seemingly lost it all can still have his pride. Make no mistake; De Niro is remarkable in Being Flynn.

But somehow the eloquence of the individual portrayals of Nick and Jonathan don't fully satisfy, because the viewer never really gets to see how one gets beneath the other's skin. We see that they make each other worse. And, yes, they eventually get better. But we never truly understand how.

You may also like: Sharon Stone’s Life in Pictures. >>

Have you seen Being Flynn? What did you think? Agree with our review? Comment on the article or take your opinion to our Movies for Grownups message boards.