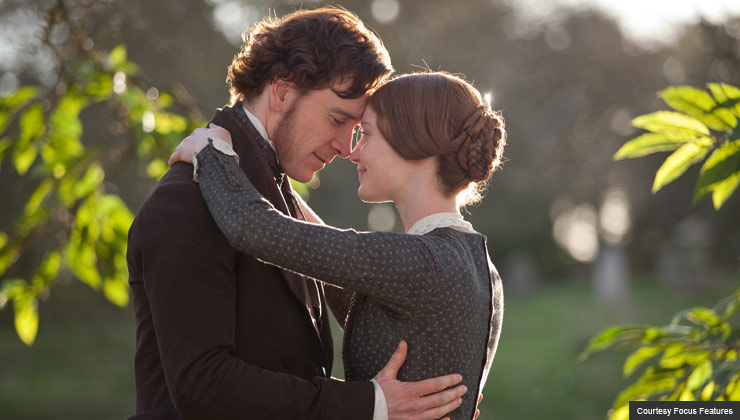 En español  |  Somehow I've gone my entire life without reading Charlotte Brontë's classic 1847 novel Jane Eyre, nor — I admit it — seeing any of the 18 previous film adaptations of the book. But even if I had, I'm sure I would have enjoyed this latest version no less.

Director Cary Joji Fukunaga gives us a fresh take on this period piece, going a bit quiet on the expected elements of Gothicism and passion, but drawing remarkable character studies from his leading lady, Mia Wasikowska, who plays Jane, and Michael Fassbender as the mercurial Rochester. He does this less through dialog than with his camera as it frames the actors' faces and their agonized, longing expressions.

Fukunaga, whose previous film was his acclaimed feature debut, Sin Nombre, a drama about a group of Central American immigrants illegally entering the United States, would seem an odd choice for this. But as producer Alison Owen points out, both stories deal with loss and the search for a better life. Fukunaga has a reputation as a perfectionist who insists on imprinting his singular vision on his works, and that is exactly what Owen wanted for this Jane Eyre.

Fukunaga embraced screenwriter Moira Buffini's adaptation, which takes a nonlinear structure, opening the film with Jane Eyre fleeing the ghostly Thornfield Hall estate, tearing across the rocky dales of Derbyshire, England. Soon she is ensconced in the home of St. John Rivers (Jamie Bell) and his two sisters. The early part of Jane's life — under the care of her cruel aunt (Golden Globe winner Sally Hawkins), at the austere orphanage Lowood and arriving at Thornfield as a teen, where she is taken under the wing of the delightful head housekeeper, Mrs. Fairfax (played by the equally delightful Judi Dench) — is recounted in flashback.

To oversee the film's cinematography — beautiful though a little murky, typical of films depicting the 19th century — Fukunaga brought in his Sin Nombre director of photography Adriano Goldman. The period details in set design and costuming (oh, those corsets and crisp undergarments that rustle as they should) are just fine. But the brilliance here is in the casting.

The rapidly rising Australian starlet Wasikowska, who we saw last year as Alice in Alice in Wonderland and as Annette Bening's and Julianne Moore's daughter in The Kids Are All Right, is fascinating as Jane. The right age (she's just 21), Wasikowska has a plain face and here wears her hair severely pulled back, the better to expose her raw determination as her eyes flash and her jaws tighten.

Surely this Jane deserves her reputation as one of the first champions of women's rights, and Wasikowska's every gesture conveys her inner strength. Fassbender, of Inglourious Basterds fame, is a more handsome Rochester than Brontë would have intended, but he offers up an irresistible paternal side as he draws Jane out, all the while hinting at the tortured secret he carries with him. The two are right for each other.

Because the film is sparse on dialog, when Jane and Rochester do speak, their exchanges are explosive. Fukunaga's subtlety keeps the viewer engrossed throughout the entire film, moving us at just the right moments.