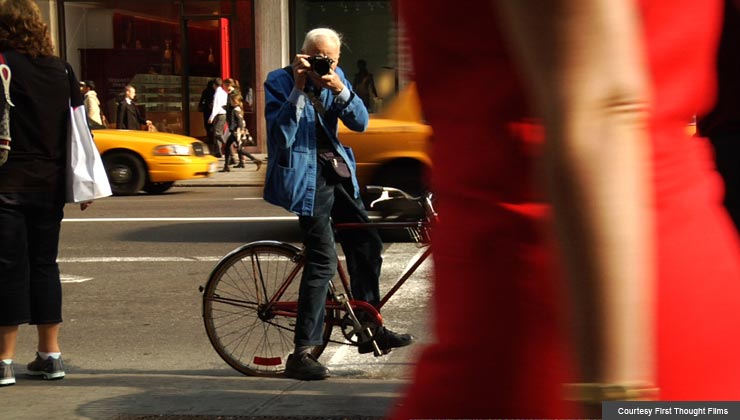 Bill Cunningham shooting on the streets of New York.

We produce, in our media, far too few personality profiles — especially honest, colorful and thorough ones. That’s the magic of Bill Cunningham New York, a no-holds-barred portrait of the now 82-year-old photographer and fashion observer behind The New York Times Sunday Styles columns “On the Street” and “Evening Hours.” Why should anyone west of the Hudson care about this guy? Simple: Because Bill Cunningham is an American original:  — a complicated (he weeps when admitting he goes to church every Sunday), quirky (sleeps on a cot surrounded by file cabinets and has no need for a kitchen), work-obsessive (never had time for much else, but joyfully insists what he does is, in fact, not work), ethical (won’t have a drink at the high-society parties he covers for The Times) guy who isn’t like anyone you’ve ever known. And Bill Cunningham is happy that way.

Bill Cunningham New York is also about New York — hence the lack of punctuation in the title. The city’s clichéd but classic arbiters of style all appear here: Anna Wintour, editor of Vogue and the subject of 2009’s slightly less intriguing documentary, The September Issue; Tom Wolfe, of New Journalism fame, known for his white suits; and Annette de la Renta, wife of the renowned designer Oscar. Cunningham, who seems to care nothing about money or celebrity, manages to forge real relationships with them all, as well as with the dandies and ordinary people who are also part of his life. He is the ultimate egalitarian, a rarity in the Big Apple.

Unlike The September Issue, this is not a film about fashion, per se. Cunningham, who limits his wardrobe to royal-blue cotton jackets worn by French sanitation workers (practical, with pockets convenient for storing film rolls), admits that his working-class parents stopped talking to him about his future when it became clear he was headed in the direction of fashion, which they thought not a manly vocation. And though he travels the city streets by bicycle, letting the latest styles dictate to his camera (instead of the other way around), he disavows fashion as merely a material pursuit. “The wider world perceives fashion as a frivolity that should be done away with,” Cunningham says, “[but] the point is that fashion is the armor to survive the reality of everyday life. I don’t think that you could do away with it. It would be like doing away with civilization.”

If Bill Cunningham New York has a flaw, it is that you come away from it feeling a bit like a voyeur. When director Richard Press asks Cunningham if he’s ever had a romantic relationship, it feels intrusive — especially when the ever-cheery photographer gives an answer that makes your heart ache for him. You’re left with this inkling that there’s a hidden side to this character that the cameras missed.