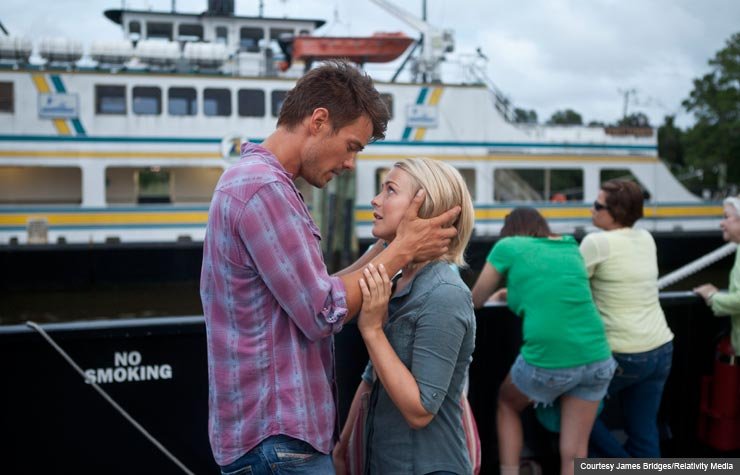 Josh Duhamel and Julianne Hough get lovey in "Safe Haven."

Safe Haven is two movies, really, a romance and a psychological thriller, neither one fully realized, which is a shame because one or the other might have been good.

Adapted from the Nicholas Sparks best seller and directed by Lasse Hallstrom, whose credits include Chocolat and Cider House Rules, Safe Haven is a perfectly fine Netflix movie and may even satisfy those looking for an alternative to Hollywood's other Valentine's Day offering, Bruce Willis' A Good Day to Die Hard.

Unfortunately, while the process of falling in love is involved in Safe Haven, it is not much of a love story or great date night choice because the romantic theme is cluttered up with some pseudo-psychological sinister stuff done far better in Julia Roberts' Sleeping With the Enemy in 1991.

Still, Julianne Hough, most famous for her fancy footwork on ABC's Dancing With the Stars, and Josh Duhamel, also a TV star (Las Vegas), are pretty people. Katie, who mysteriously shows up in small Southport, N.C., and Alex, a widower who lives there, find one another after bad things happen to each of them individually. The characters' separate back stories are told in confusing flashbacks, which is where the aforementioned messiness comes in. But we root for them anyway, because they are so made for each other and because everyone else in town is happy they're together, too.

Meanwhile, there's the other movie, a crime story, involving a dogged cop with a dangerous air about him (played well by Australian David Lyons) relentlessly pursuing his suspect, who happens to be cute Katie. He frightens witnesses and by extension us with his tendency to drink and explode. As he uncovers clues to Katie's whereabouts, she remains clueless but things get tense for the audience.

At the end the two movies come together, and there are all kinds of explosions, real and emotional, and a surprise involving a side character played by How I Met Your Mother's Cobie Smulders that ought to have you shaking your head and muttering, "Seriously?!" Of course, if you read the book, you know all about it.

Safe Haven does have some nice Americana moments, lovely scenery and two truly adorable kids, playing Duhamel's son and daughter. And while Hough and Duhamel do all right with the material, they are not Rachel McAdams and Ryan Gosling, who starred in that other romance from another Nicholas Sparks book, The Notebook. In fact, if you want a great Valentine's Day movie, that's the one to watch.