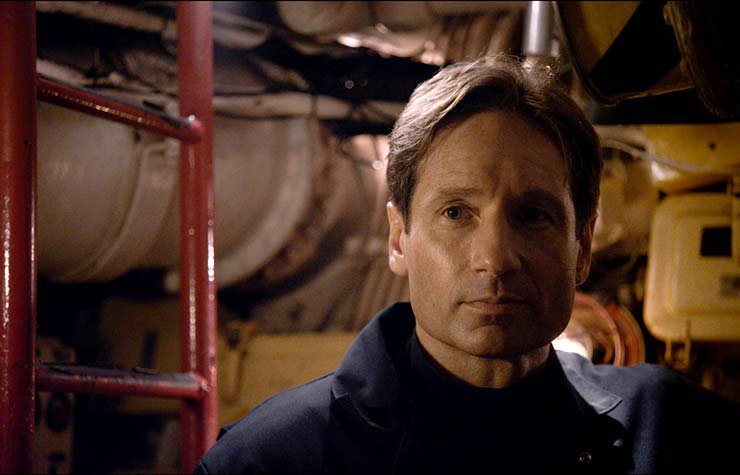 Daniel Day-Lewis descends from Olympus every four years or so to create some astonishing Lincoln-esque character, but I submit that the best day-to-day actor in films today is Ed Harris.

From mega-productions (The Abyss) to painstaking indie flicks (A History of Violence), Harris always finds a way to make a character interesting, and he's picked up four Oscar nominations along the way. His subtle skills are put to fine use in Phantom, a Cold War submarine thriller stylishly directed by Todd Robinson.

Harris plays Demi, a career sub skipper who finds himself in command of a decrepit old Soviet sub. It's the 1980s, the age of nuclear submarines, but Demi is relatively happy to cruise out his career on a diesel-powered "smoker."

Then one day into Demi's hatch drops a mysterious KGB officer named Bruni, played by David Duchovny. The sub is ordered out to sea, supposedly to try out some new sonar-jamming device. But Bruni has something else in mind — and by the time Demi figures out what it is, the world is on the precipice of World War III.

Bruni thinks he's the sharpest knife in the drawer, of course, but old-school Demi knows more than a few tricks, and Phantom becomes a dual game of cat and mouse — the first between submarines in the open sea; the second involving the onboard rivals.

Like most well-filmed sub dramas, Phantom is not for the claustrophobic (one character belatedly discovers he suffers from the condition, making submarine duty a particularly bad career choice for him). The movie was filmed on an actual submarine, so for the audience that sense of everybody pressing up against each other is almost a tactile experience.

Tailoring his presence to the environment, Harris gives a subdued, almost subliminal performance. Likewise Duchovny, whose villain has outsized ambitions, never lets his character's behavior boil over. They're both playing guys who are used to working in close quarters, and with every move they seem conscious that any carelessly knocked knob or dial could spell disaster.

Script-wise, Phantom's waters seem to be scattered with floating fragments of castaway plot: Demi suffers from epilepsy, but it plays no role in the story line; we're tipped off early that Bruni and Demi have met before, but the revelation of just where and when proves so inconsequential that even the characters seem barely interested.

Still, Phantom offers Ed Harris, reliable as ever, finding depth in a character whose life below the surface has rendered him all but inscrutable.