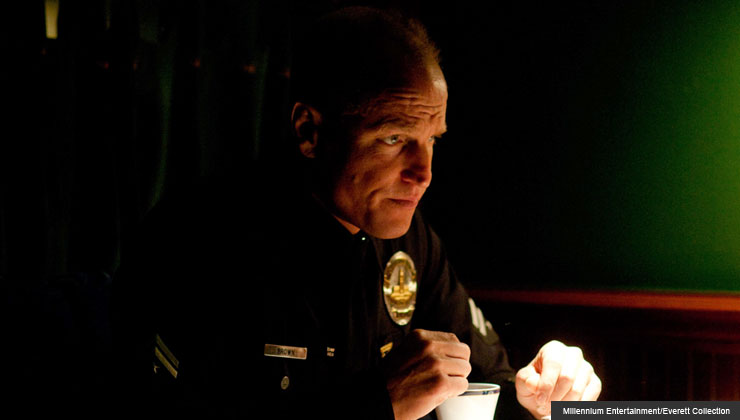 Veteran L.A. cop Dave Brown (Woody Harrelson) is under pressure and not handling it well.

En español  |  The story of a cop gone bad, Rampart offers up a familiar and not particularly nuanced plot. But what's lacking in narrative sophistication is made up for with its gritty portrait of a character set firmly in a place in time.

What Was Your Favorite Movie of the Year?

It's 1999, and corruption rages in LAPD's anti-gang units, most notably, as the film's title suggests, in the mid-city Rampart Division. Officer Dave Brown, breathtakingly portrayed by Woody Harrelson, is a Vietnam vet with 24 years on the force. Having years ago gunned down a known rapist, he's something of a folk hero among his colleagues on the line. He's also a badass misogynist and racist. Caught up in the rules-don't-apply spirit of the setting, he spends most of his time on patrol boozed up or hooking up, and soon is caught on camera beating the bejesus out of a suspect, Rodney King-style. We follow him in free fall with the sense that it's a long way down.

Director Oren Moverman, who in his 2009 debut, The Messenger, coaxed an Oscar-nominated (and -worthy) performance from Harrelson as a military casualty communications officer, once again scores a slam dunk in giving this underrated actor the leading role. Here, Harrelson communicates with his every pore what it's like to come unhinged while operating on the wrong side of the law.

Moverman also assembles an impressive cast of supporting players, all of whose characters seem incapable of turning Brown around. There's Assistant District Attorney Joan Confrey (a tough Sigourney Weaver), who tries unsuccessfully to get the troubled cop to retire. The seductive Robin Wright as defense attorney Linda Fentress smolders in sex scenes with Brown, then tries to turn him away when she realizes she's playing with fire. The brash rogue cop exposes his vulnerability at home, where he lives with his two ex-wives (played by Anne Heche and Cynthia Nixon) — who happen to be sisters and who each have a daughter with him — until they tell him it's time to go. Best of all is the young Brie Larson (formerly of The United States of Tara), whose teenage heart breaks as she attempts to talk her dad out of his endless spiral.

Los Angeles native crime-fiction author James Ellroy, best known for his novel The Black Dahlia, co-wrote the script with Moverman, and the result is a quintessential film noir. The L.A. streets and parking lots and neighborhoods Brown travels all seem to smell and even taste of the darkness that drives Ellroy's style. For some, the pessimism that consumes the main character and the world around him may be too much to take, but it's equally hard to look away.