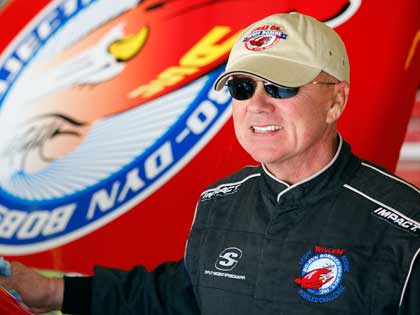 Geoff Bodine was so determined to race cars as a teen that he donned a wig and dressed up like a girl, just so he could enter an all-female race called the Powder Puff Derby. And he did so knowing that he couldn’t possibly finish the race.

“My parents wouldn’t let me race until I graduated from high school. So I came up with the crazy idea of entering the Powder Puff Derby,” the legendary NASCAR racer — who will appear at the Orlando@50+ National Event — tells AARP. “But my father gave out the trophies and took the pictures with the winner. So I was leading, and had to shut the engine and coast off the track because I couldn’t win.”

This ruse — which his parents didn’t learn of until their 50th wedding anniversary — is indicative of the passion that Bodine has always shown for the sport.

Growing up in a farming and racing family — Bodine’s father and grandfather built a race track in Chemung, New York, when Bodine was 1 year old — his father put together his first racer when he was 5.

In between baling hay, gathering eggs and shoveling manure on his family’s chicken and dairy farms, Bodine learned his future trade by racing go-karts. He went on to great success as a pro, winning 55 races in 1978 alone — which earned him a mention in a Guinness Book of World Records — and became NASCAR’s Winston Cup Rookie of the Year in 1982. He later won many of NASCAR’s most prestigious races, including the 1986 Daytona 500. In 1998, he was named one of NASCAR’s 50 greatest drivers.

Bodine explains that the key to success for a race car driver is a never-waning, laser-precision focus.

“You have to be able to concentrate for three-and-a-half, four-and-a-half hours under extreme conditions of heat and mental strain,” he says. “Weather can change. Track conditions change. Your car can change. You have to analyze that every lap and every corner. You’re constantly having to adjust. It’s amazing to be able to run within inches of another car, and make adjustments without even thinking.”

But even the sharpest instincts can’t always prevent disaster. In 2000, Bodine miraculously survived one of the worst crashes in NASCAR history when his truck rolled over in a fiery heap in the Daytona International Speedway in Daytona Beach, Fla. He suffered a concussion and multiple bruises and fractures. He says that he died for several minutes.

“Without question, God reached down that day and protected me,” he says. “Remarkably, I have no lasting injuries from that accident — nothing that slows me down physically or mentally. I’m very blessed to be alive, and I appreciate every breath I take.”

Rather than discourage or instill fear in him, the accident ignited a pronounced boldness in Bodine, who was racing again within two months. He finished third in the Daytona 500 just two years later on “the same track that almost ended my career and my life.”

“The accident didn’t slow me down,” he says. “It didn’t take any of my confidence away, and I still love driving. I’m trying to drive even more now.”

These days, at 61, Bodine enjoys the advantages that his vast wealth of experience provides.

Now, as a lifelong veteran of triumph and near tragedy, Bodine has imbued his other endeavors with this same winning attitude. Bo-Dyn Bobsled Project Inc., a company he founded in 1992, uses NASCAR technology to build bobsleds, including the sled used by the four-man team that won the gold medal at the 2010 Winter Olympics.