En español  |  The Dalai Lama’s new book, My Spiritual Journey, would attract a much smaller audience, of course, were its author not a world celebrity. Coming from anyone else of similar renown, the author’s characterization of himself as “a simple Buddhist monk” would sound falsely self-effacing.

But the standards of Western society — Is he being ironic? Is he for real? — do not apply to this most famous of living Buddhist monks. You instinctively sense that you can take what he says at face value — and that it comes directly from his heart. So it often feels refreshing to read the Dalai Lama’s straightforward, hopeful words.

• Love in a Chilly Climate. Read

• Life as a Footnote. Read

His longtime collaborator and interpreter, Frenchwoman Sofia Stril-Rever, has gathered selections from interviews, talks, and speeches by the Dalai Lama, interweaving them with her own writing to provide some historical perspective for readers who may be unfamiliar with the details of his story. The Dalai Lama fled Chinese-occupied Tibet in 1949 and has lived in India ever since, setting up a Tibetan government in exile in Dharamsala.

His latest book is a sort of spiritual autobiography, presented in three stages. The first discusses the lessons of our common humanity. The second reflects on the Dalai Lama’s role as a Buddhist monk and his hopes for a spiritual revolution that will transform the world through each of us transforming our mind. The third section covers his role as the Dalai Lama (literally, “Ocean Teacher,” from the Tibetan words for great spiritual leader) and exiled leader of Tibet.

For anyone wondering what the daily life of a world spiritual leader must be like, parts of the first section are just plain fun to read. He arises by 3:30 every morning, then prays and meditates for several hours before walking on a treadmill, eating breakfast, and reading the paper. Who can resist that mental image of the Dalai Lama puffing away on his own exercise equipment?

Tibetans are a cheerful people, says the Dalai Lama, so it’s a logical delight to encounter his description of himself as a “professional laugher.” While it’s important to remain positive, he says, it’s equally crucial to stay realistic. To that end, he feels his meditation practice and Buddhist philosophy — in particular, the notion that a practice of nonattachment can lead the way out of suffering — have helped him cope with the 60 years he has spent in exile from his homeland: “By broadening the way you look at a problem, you understand what is bad about it, but you accept it.” 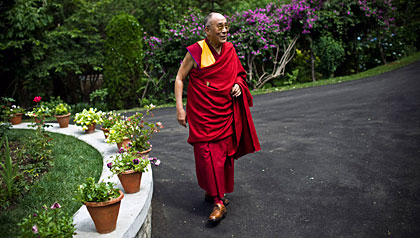 The Dalai Lama strolls on the grounds of his residence in Dharamsala, India.

“My religion is compassion,” the Dalai Lama frequently says, and that sentiment forms the basis of much of his writings for secular Western audiences. Buddhism is not a proselytizing faith, but the Dalai Lama does try to spread to everyone — not just those interested in spirituality — his belief that compassion is the most effective way to end suffering.

A key tenet in Buddhism, discussed from several angles here, is the interdependence of all beings, the realization of which leads naturally to altruism. Indeed, writes the Dalai Lama, “in such an interdependent world, the concept of war seems anachronistic.” Apparently not everyone has gotten that news — but more meditation on interdependence might help.

The question is not whether his views are too naïve or simplistic, but whether his ethical outlook offers something that can be put to practical use in people’s everyday lives. Convinced that valuing material progress above all else causes many of our social problems, the Dalai Lama has chosen to advocate for kindness and compassion.

My Spiritual Journey offers examples of the results of that approach in the Dalai Lama’s own life: After meditating on loving-kindness for all beings several hours a day for many years, he can write, “In spite of the atrocious crimes [of ethnic cleansing] the Chinese have committed in our country, I have absolutely no hatred in my heart for the Chinese people.”

In the final section, on Tibet, Stril-Rever’s hand in the manuscript becomes more pronounced. She quotes at length a poem by Tibetan freedom fighter Tenzin Tsendu, which describes a mother leading her children over snow-mantled mountains to what Stril-Rever calls “freedom in exile” in India. (That phrase was also the title of a previous autobiography by the Dalai Lama, which focused on political events.)

The book ends with a poem written by the Dalai Lama at the request of American writer Ron Whitehead, a research-institute founder who in 1994 organized a festival at New York University dedicated to world peace. The poem’s theme: “Never lose hope!” Is it too 1960s? Too simplistic? Perhaps. But when a spiritual leader banned from a small Asian nation galvanizes a worldwide following, attention must be paid. Reading My Spiritual Journey is an alternately inspiring, fascinating, frustrating, and hopeful way to do just that.

Joan Mooney is a Washington-based writer whose book reviews have appeared in The New York Times Book Review, The Washington Post, The Baltimore Sun, and many other publications.