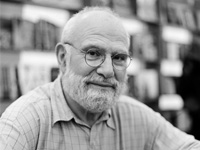 British-born neurologist Oliver Sacks has a knack for writing case studies that meld personal observation with scientific explanation and philosophical musing. In such classics as The Man Who Mistook His Wife for a Hat (1970), Awakenings (1973) and An Anthropologist on Mars (1995), he has mapped the contours of neurological diversity, while emphasizing the resilience of the human psyche.

In his latest collection of true-life tales, The Mind's Eye, the 77-year-old Sacks focuses on vision problems and challenges — including his own. For the first time, he writes in detail about his face and topographical blindness. So severe are these maladies that Sacks can't even recognize himself in a mirror, nor wander his own neighborhood without getting lost. (Read an excerpt from The Mind's Eye.)

But for Sacks, professor of neurology and psychiatry at Columbia University Medical Center, there was worse to come. In vivid diary entries, he recounts his struggles with an ocular melanoma in his right eye. Awaiting what will turn out to be the first in a string of operations, he writes, "I feel a terrified child, a child screaming for help, inside me." Despite the efforts of his physician, to whom he dedicates this book, Sacks has since lost all vision in that eye.

In The Mind's Eye, Sacks couples autobiography with other accounts of affliction and healing: A pianist finds herself unable to read either music or books, but continues to perform brilliantly from memory. A detective novelist loses the ability to read, but still manages to write his books, inventing a protagonist who shares his plight. And an aphasic, partially paralyzed woman compensates for her inability to speak with gesture, mime and the sheer force of her personality.

"These are portraits of human beings and how they deal with neurological and perceptual vicissitudes," Sacks said in a recent phone interview with the AARP Bulletin, "and I'm one of them."

Q. What was the inspiration for The Mind's Eye?

A. I've been interested in vision and its phenomena and its problems for as long as I can remember, partly because I had visual migraines. [With visual migraines] one may lose vision entirely, or lose vision in one-half of the visual field; you may lose color; or you may see zigzags across the visual field and may have hallucinations. It made me think very early that vision is dependent on the brain. The book is a sort of strange mixture — of a memoir, and essays, as well as four case histories. I want to discuss visual experiences with the reader.

Q. One theme of this book, as in your previous work, is the power of people — and of the human brain — to adapt to adversity and compensate for deficits.

Q. Can you give a couple of particularly striking examples?

A. This hit me very strongly with regard to Lilian Kallir, the pianist, who initially lost the power to read music. And then this happened to her three years later with print as well. And then she lost the ability to recognize common objects. When I tested her in the clinic, I couldn't imagine how she survived outside. I had to make a house call and see her in her own place.

Q. What did you observe?

A. She had organized everything, but especially books, by their color, by their shape, by their subjects. This woman, who couldn't recognize anything much in an ordinary way, found an extraordinary way of organizing objects. When we went into a supermarket, she knew the labels of everything. This seemed a remarkable example of how someone who could have been in a state of absolute visual bewilderment was coping rather well.

Q. Can you offer another example of adaptation?

A. The novelist who lost the ability to read. When one loses an ability to read in this way, one retains the ability to write. I wondered how he could ever write a book again if he couldn't read what he'd written. But what was happening was his hand and then his tongue were copying the shapes of letters as his gaze moved along the line.

Q. How did that work?

A. In effect, rather than reading with his eyes, he was writing with his tongue. This is not something which he designed. I don't think one could think up such a weird thing. But this is what the brain, the organism, came up with. This is a very nice example of the resilience and inventiveness — I almost want to say the playfulness — of the central nervous system.

Q. I'm thinking of the comment he made: "The problems never went away, but I became cleverer at solving them."

A. You know, that could be the epigraph of the entire book.

Q. You seem to work as much like a journalist as a doctor, immersing yourself in people's lives, visiting them at home, even traveling with them. That can't be typical for a neurologist.

A. It's not typical, but it's not unheard of. [Jean] L'Hermitte — a great neurologist — would advocate accompanying patients to bistros. With Lilian, the pianist, for example, I had been seeing her and visiting her for three years. Although I kept detailed notes — I started seeing her in '99 — I don't think I started to think of a piece till 2002. I don't go in as writer looking for material, or as a scientist wishing to do an experiment. I go first as a doctor who's called in to deal with a problem, and the other things may come later.

Q. For years, you thought that your own topographical and face blindness was at one end of the spectrum of normal variation.

A. I'm still uncertain where normal variation ends and pathology begins. Face blindness, although it may have comic aspects, may also be catastrophic. People may not recognize their own children. And it's not uncommon. Face blindness affects about 2 percent of the population. It's almost unknown in the medical profession and not well-known to the general public.

Q. You write that "a significant part of what is variously called my 'shyness,' my 'reclusiveness,' my 'social ineptitude,' my 'eccentricity,' even my 'Asperger's syndrome' is a consequence and a misinterpretation of my difficulty recognizing faces."

A. It may be that I have all the above conditions in addition to face blindness. In my case, I think it has accentuated a tendency to solitude and reclusiveness. But in other people, like Chuck Close, the artist who has face blindness, he tries to make contact with people, to get into conversation. He usually starts by saying "How's the back?" because he says he can safely assume that almost everyone has a back problem.

Q. How have you adapted to these neurological deficits?

A. Probably by limiting both social life and travel, unless I'm with someone.

Q. Your description of your bouts with ocular melanoma is vivid and terrifying. What were the emotional effects of your disease?

A. In the first three weeks, while I was awaiting radiation, I was very frightened for the eye and more generally about my life. Later, when it seemed to have calmed down, I was reassured. But then it went bad again. There was a bit of tumor near the fovea that had started to grow. And so it was finally necessary to laser that and to sacrifice central vision. I had dreaded losing central vision. [But] I was getting such gross distortion of the eye, like elongated people and puffy faces.

Q. How did you deal with that?

A. I would close that eye, or wear a patch over it. It had become very troublesome, and it was sort of a relief to lose central vision. What continues to bother me quite a lot is losing stereo [three-dimensional] vision.

Q. And since then?

A. Again, I've adapted. I live independently, I walk around, I go out. But problems are lurking. I have to use a stick; I can't judge curves, I can't judge stairs. Once or twice I thought I was on the bottom of a staircase and I wasn't. I can't trust my eyes. I seem to live in a visually cluttered world with no space between objects.

Q. Have your eye ordeals affected your attitude toward medicine?

A. Yes. I was greatly impressed with the real patience and dedication of the doctors, the ophthalmology department, at Columbia. They did everything they could to get things right. But in the face of an incorrigibly oozing retina, I think medicine and surgery ran into their limits.

Q. In addition to the eye surgery, you've recently had a knee replacement and spinal surgery.

A. Recovery was slow. For four months, I couldn't sit down. And during those four months, I had a lot of pain. The only thing that took my mind off it was writing. I did that standing up. I couldn't sit. So I wrote the book in the old-fashioned way, rather like the Victorians with their standing desks.

Q. Were these age-related issues?

A. I have to admit I was a competitive weightlifter. At one time I had a California record for lifting with deep knee bends: I did that with 600 pounds. You may pay for it years later with damage to the soft tissue. So I can't attribute all of this to age. Deafness and cataracts are age-related. And I sometimes have difficulty thinking of proper names. I think, and I certainly hope, that I'm basically intact mentally.

A. My father lived and worked as a doctor till his 95th year. I love and enjoy work and activity, and I get demoralized if I can't.

Q. What's the status of your eye now?

A. About a year ago, I had a hemorrhage. I had five surgical attempts this summer to clear the eye. They all worked, but within three days, the eye had bled again. They haven't found the culprit. It's probably little capillaries — maybe radiation damage to the retina. If I get vision back in that eye, well and good. I hope I do.

Q. Can you still drive?

A. I haven't driven. I've wondered about it. I will probably start out in a country lane. If I end up in a ditch, that's not too bad.