Ten years before the Soviet Union collapsed, dogged Russian detective Arkady Renko made a literary name for himself — and for his creator, novelist Martin Cruz Smith — in the best-selling thriller Gorky Park (1981).

Thirty-two years later, Renko is still on the job in the compelling Tatiana, Smith's eighth book in the iconic series. (Like Sue Grafton's Kinsey Millhone, the "fiftyish" Renko is aging at a more leisurely pace than the rest of us — about two years on the page for every three in the real world.) Renko has survived countless attempts on his life — in Stalin's Ghost (2007), for example, he was shot in the head — but now he's enjoying a new lease on life. And so is the man who created him. 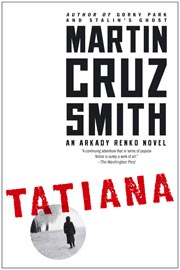 "I'm feeling great — quite undeservedly so," says Smith with the sort of dry humor that typifies Renko's dialogue. Smith, 71, was diagnosed with Parkinson's disease about a decade ago. Since January, thanks to a procedure known as deep brain stimulation (DBS), Smith has found some relief from his symptoms. (DBS involves the implantation of a neurotransmitter and is designed to help with tremors.)

Before DBS, Smith's manual dexterity had deteriorated to the point where he nearly couldn't type. He wound up dictating at least half of Tatiana to Em, his wife of 48 years.

Smith says he's now feeling good enough to embark on a cross-country book tour to promote his — and Renko's — triumphant return. "I recently signed 300 books," he reports. "Not one of those signatures was legible, but it was a big step forward just to try it."

"DBS can't get you back to square one," says Smith. "But I'm not going crazy, because I'm not being persecuted by shakes."

The novelist, who lives in the shadow of Mount Tamalpais in California's Marin County, wasn't always this open about his health problems. But now, like singer Linda Ronstadt and actor Michael J. Fox, he's taking his experience public. "I was averse to talking about DBS or Parkinson's at first," Smith explains. "It's a very private thing. But as I came to realize that DBS was so little known, I decided people deserve to learn they have that option."

Like Renko — who discovers in Tatiana that a bullet fragment in his brain could kill him at any moment — Smith has been contemplating mortality a lot these days. "You're dealing with a feature of the obituary column that reads, 'complications of Parkinson's.' That makes you wonder, 'What kind of sentence am I under?' But at the same time I find myself saying, 'Hey — I feel pretty good!' Even if you have Parkinson's, there's still a chance of being the luckiest man in the world."

Smith lauds the real-life grit of Anna Politkovskaya, the Russian journalist who inspired Tatiana. A vocal critic of Russian President Vladimir Putin, Politkovskaya was shot dead in Moscow in 2006. Her killing remains unsolved, but many speculate she was assassinated for articles painting Putin as a Soviet-style dictator.

Smith's new novel finds Renko probing the death of Russian journalist Tatiana Petrovna. Her fall from a sixth-story balcony was suicide, the police maintain, but Renko ain't buyin' it.

"I was interested in the courage it takes to be a journalist in Russia," says Smith. "Novaya Gazeta is a newspaper staffed by some very brave people. When I visited their offices, I was struck by the number of casualties they've rung up. Even knowing they may be beaten when they step outside, they continue to publish."

Current events always play a central role in the Renko novels. The investigator has butted heads with corrupt government officials, Russian street gangs and mobsters in his fight for justice, and he has watched his native land evolve from the Cold War through perestroika into Putin's new Russia.

"I had the idea of an honest man in a dishonest system," says Smith of investigator Renko, "and I let that be my guide. And because Russia was always changing, I could write about the country again and again."

Should readers pick up his novels for entertainment or for political enlightenment? Smith finesses the question: "I think people are entertained by the truth. That gives a lot more savor to the meal."

Already at work on his next novel — a stand-alone set in Venice during World War II — Smith hopes people will pay more attention to his writing than to his illness. That's why, after watching the first episode of Michael J. Fox's eponymous new sitcom about a journalist with Parkinson's, Smith says he hopes the show "gets a little less Parkinson's oriented. They kept driving home that theme, but if you've got it, the last thing you want is to be referred to as 'that guy with Parkinson's.' "

Carol Memmott writes about books and other popular culture.