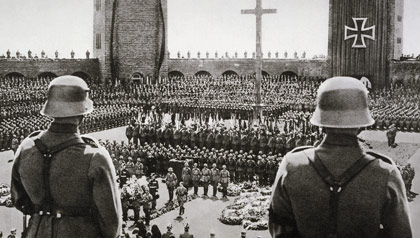 Aren’t we done with the Nazis? Apparently not, for here come two big works of nonfiction about history’s most villainous cadre.

Erik Larson’s In the Garden of Beasts, as its subtitle promises, depicts Love, Terror, and an American Family in Hitler’s Berlin. And Newsday editor Steve Wick’s The Long Night, subtitled William L. Shirer and the Rise and Fall of the Third Reich, chronicles Shirer’s six years battling Nazi censorship as a foreign correspondent.

Both authors aim to give us history without the benefit of foreshadowing, plunging readers into the thick of events with protagonists who didn’t know how things would turn out in the end. Those players have dramatically different personalities: Larson’s self-absorbed American family is the type you’d rather not have next door, while the honorable Shirer is the upright guy we all aspire to be.

Following American ambassador William Dodd and his 24-year-old daughter Martha through the year after their arrival in Berlin on July 13, 1933, Larson displays the storytelling gifts so richly evident in his earlier Isaac’s Storm (1999) and The Devil in the White City (2003). He sticks close to his subjects’ point of view, recapturing the messiness of the past as it was actually lived. While Ambassador Dodd was writing home that he hoped to encourage moderates in the German government who “wish to stop all Jewish persecution [and] co-operate with the remnants of German Liberalism,” his daughter was blithely dismissing accounts of anti-Jewish violence as exaggerated and having affairs with two decidedly non-moderate Germans: Gestapo head Rudolf Diels and foreign press chief Ernst Hanfstaengl, whose job was to spin the Nazi Party line to journalists.

While Larson noncommittally conveys the Dodds’ perceptions of Hanfstaengl as surprisingly charming, Wick gives us an opposing view: Shirer, he reports, heard from fellow journalists that the Nazi press officer was “a loudmouth, a buffoon, and a toady.”

Shirer arrived in Berlin on August 25, 1934, the day New York Evening Post reporter Dorothy Thompson was expelled from Germany on Hanfstaengl’s orders. Unlike the Dodds, who spent their first months in the city blundering through a moral minefield, Shirer was painfully aware of the ethical dilemmas he faced. Foreign journalists dealt daily with Nazi censors intent on suppressing all unfavorable news. Correspondents who filed stories the Nazis didn’t like — in particular, about the persecution of Jews, which had gotten under way in earnest the year before — endangered their sources (and risked expulsion themselves). Especially after he joined CBS in 1937 — the Nazis could monitor radio transmissions far more easily than cabled stories — Shirer had to walk a tightrope, telling as much of the truth as he dared and bowing to censors’ demands when he must.

His commitment had personal consequences. Posted to Vienna when German forces annexed Austria in 1938, Shirer was blocked from reporting what he had seen of the invasion. He flew to London and made an uncensored broadcast, leaving his critically ill wife and their newborn daughter in a Viennese hospital as the Germans marched in.

Getting at least some of the news out, Shirer believed, justified certain compromises. When Germany invaded the Low Countries in 1940, for example, Nazi censors refused to let him utter the word “invasion”; he hated complying, he wrote in his diary, but “it was a question of sacrificing the whole important story for one word.” Shirer balked, however, at broadcasting Nazi boasts that an invasion of England was imminent; perpetuating such lies would “do the beleaguered British a terrible disservice that could be fatal.” Nor would he bow to the insistence of his boss in New York that an acceptable broadcast could consist of nothing more than reading official communiqués over the airwaves. “I think my usefulness here is about over,” Shirer wrote in his diary in October 1940. “Until recently, despite the censorship, I think I’ve been able to do an honest job of reporting from Germany. But it has become increasingly difficult and at present it has become impossible.”

Next: Awakening to the genocidal core of Nazism. >>

Wick’s narrative of how Shirer tricked the Gestapo into clearing for departure two trunks containing that diary and other compromising documents is as exciting as the best le Carré. So is the nail-biting description of his exit via a turbulent plane ride from Berlin to Barcelona in a December snowstorm. Though The Long Night’s author spends some time wondering whether Shirer and his peers did enough to alert their audiences to the plight of Germany’s Jews, overall Wick’s book is an unambiguous account of an honorable man doing his best under agonizing constraints.

Far more discomfiting is Larson’s portrait of two naïve Americans slowly awakening to the genocidal core of Nazism. The reason: Larson’s technique is to report their often-blinkered views without commentary. Martha Dodd saw the Nazis as romantic revolutionaries in the early going, while her ambassador father made morally tone-deaf accommodations to German racism: Dodd père rented, for a bargain, the mansion owned by a wealthy, terrified Jewish family. More shameful still, he complained to his superiors that the excessive number of Jews employed by the American embassy was hampering his ability to work with the German government.

Such political myopia was corrected by the crush of events within a year of the Dodds’ arrival in Berlin. Shocked by Hitler’s bloody consolidation of power on June 30, 1934 (“The Night of the Long Knives,” which closes Larson’s main narrative), Ambassador Dodd became a vocal opponent of the Nazi regime. (Indeed, FDR ordered him home in 1937 for just that reason.) Martha, meanwhile, morphed from Nazi apologist to Soviet spy. Never mind Larson’s defense of Martha as “not precisely a hero, but a woman of principle.” Vapid quotes from her memoirs and personal papers will prompt many readers to agree with Wick’s more critical assessment: She was “a party girl in Berlin” whose politics “were bizarre to the extreme.”

Larson states in his preface that his goal is “to accompany my two innocents through the world as they experienced it.” But when does refusing to judge your subjects cross the line to apologizing for them? His vivid, readable text induces a moral queasiness that the author may well have intended. We like to believe we’d behave with Shirer’s principled firmness, yet the Dodds’ confused stumbles are not inconceivable when rendered in context. In an age of extremism, these two books remind us, seldom is it simple to do the right thing.

Wendy Smith is a contributing editor of The American Scholar.