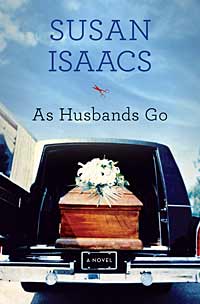 Susan Isaacs came up with a winning formula in Compromising Positions (1978), and she has largely stuck to it ever since:

…give her a mystery to solve…

…then turn her loose to wisecrack her way through a roster of entitled suspects and none-too-bright investigators, the latter upstaged when our heroine exposes the guilty party.

Though Isaacs has made forays into family saga (Red, White, and Blue, 1998) and historical fiction (Shining Through, 1988), her fans have been happiest when she stays close to her home turf among New York's privileged classes. She does just that in her latest novel, As Husbands Go, a lightweight adventure that makes a perfect summer read—so long as you find her narrator amusing rather than annoying.

Susan B. Anthony Rabinowitz Gersten is, she's not ashamed to tell us, "one shallow (though contented) human being." And why shouldn't she be contented? Susie's come a long way from her lower-middle-class childhood in Brooklyn, where her parents' "emotional gamut ranged from a high of not unhappy to a low of vaguely depressed." Now she lives in picturesque Shorehaven, Long Island, in a swanky Georgian manor populated by her adorable four-year-old triplet boys, a couple of Norwegian au pairs, a full-time housekeeper, and her husband, Jonah, a Park Avenue plastic surgeon who recently presented her a Cartier Santos watch. Susie's also a partner in a high-end floral design business—but that's not what keeps her in Loro Piana cashmere bathrobes and designer antidepressants.

It's a placid life on the surface only. Susie is worried sick as she begins her story, for wonderful Jonah did not come home the night before—and now he's nowhere to be found. She knows what you're thinking, and it's true: With three active preschoolers and a house full of help, their sex life could stand some work itself. But Jonah, Susie assures us, is "a one-woman man [with] an actual moral code."

Those ethics seem MIA when Jonah turns up dead two days later, stabbed with a pair of scissors in a call girl's apartment on East 87th Street. "That's a good neighborhood," babbles Susie—and the reader's sympathy for the protagonist sinks even lower when Susie insists that "Jonah wouldn’t cheat on me, especially with a call girl capable of calling herself Cristal Rousseau."

It's all about attitude here. If you embrace Susie's sassy stance, you won't mind that she seems not so much devastated by her husband's death as determined to prove that their life together was the idyll she thought. The police believe it's an open-and-shut case against the call girl—and to make sure it's tied up with a bow, the chief of the DA's homicide unit won't let Susie interview her.

As Susie picks holes in the case, her snobbish mother-in-law offers even less support. "You are in such denial!" shrieks Babs Gersten, convinced that Susie "turned [Jonah's] life into a hell" and that she simply can't accept the fact he resorted to paid sex for relief. But the homicide chief wears dowdy clothes, and Babs "contours [her] eyes with three browns for daytime," so what would they know? Of far greater assistance is Susie's stylish lesbian grandmother, Ethel, who flies in from Miami to urge her to trust her instincts and find Jonah's killer herself.

Once Susie uncovers financial shenanigans in Jonah's group practice, only one person could really be the killer. Readers won't miss the suspense—provided they enjoy listening to Susie and Grandma Ethel diss the clothing and character of everyone in sight.

In a book short on genuine emotion, even by murder-mystery standards, it's wise to hustle your sleuths offstage with a witticism. In this case, it’s Grandma Ethel laying out her philosophy of life: "The best a girl can do is mind her ethics—and eat a nice lunch."

Wendy Smith, a contributing editor of The American Scholar, was a finalist for the National Book Critics Circle 2010 "Excellence in Reviewing" award.