Because movies are a collaborative art, the Hollywood memoir — stuffed to overflowing with celebrities and power brokers — can be a lot of fun. But there’s a downside: Among that large cast of characters, the author often finds scapegoats to take the blame for flops. Somebody screwed up here, the story usually goes, but it sure wasn’t me: The director was a dimwit, the star was a diva, the screenplay was a dog.

Peter Bart has no need to engage in such finger-pointing: As a production executive at Paramount Pictures in its early-1970s heyday, he had a hand in such classics as The Godfather, Chinatown, Rosemary’s Baby and Love Story. So it’s a surprise to encounter the slightly defensive tone that threads his entertaining memoir, Infamous Players: A Tale of Movies, the Mob, (and Sex). Bart wants us think of him as the smart, level-headed guy — the one who read not only the scripts he was producing but the books that sired them. If only, he laments, everyone around him had not been losing their heads to cocaine and sex and lousy screenplays!

Bart had a stronger literary pedigree than your average Paramount employee: He was covering California for The New York Times when legendary producer Robert (The Kid Stays in the Picture) Evans tapped him to help right the foundering studio in 1967. Back then Paramount belonged to Gulf + Western, a hydra-headed conglomerate that owned, among many other properties, sugar plantations, a zinc mine, and the New York Knicks. That meant Bart and Evans could work without close scrutiny — but not without a superabundance of salvage work. Bart inherited disasters such as Darling Lili, whose mission impossible was to convince moviegoers that Rock Hudson and Julie Andrews had romantic chemistry. (“I may never make love again,” a fellow exec told Bart as they studied the wreckage together in a screening room.)

Trying to steer Paramount away from stiff melodramas (and toward Easy Rider youthfulness), Bart ran into roadblocks galore. Gulf + Western founder Charlie Bluhdorn meddled in casting decisions. So did mobsters, whose machinations led to B-movies mysteriously appearing on Paramount’s production schedule and pornographers skulking about the backlot. Frank Sinatra bullied Roman Polanski on how to film the Chairman of the Board’s then-wife, Mia Farrow, in Rosemary’s Baby. And Evans — supposedly in charge — was often off partying at his famous mansion. “A girl might end the night with Jack Nicholson, Ted Kennedy, or Alain Delon,” Bart writes of the soirees there. Given the scarcity of women in Paramount’s executive suite, those may have been the only advancement options Hollywood businesswomen had at the time.

Despite all this, Bart successfully shepherded offbeat projects such as the pioneering intergenerational romance Harold and Maude (even if the showbiz trade paper Variety, which Bart would later edit, sneered that the film “had all the fun and gaiety of a burning orphanage”). College kids of the time loved a touch of the bizarre in their movies — it was the dawn of the indie era — but Bart conveys this strangeward shift awkwardly at best. Recalling the decision to cast Dustin Hoffman rather than Robert Redford in The Graduate, Bart writes: “[T]he movies that were stirring excitement were not about blond, blue-eyed Protestants but rather about freaks.”

Next: Bart doesn’t hesitate to enumerate the misfires of others. >> 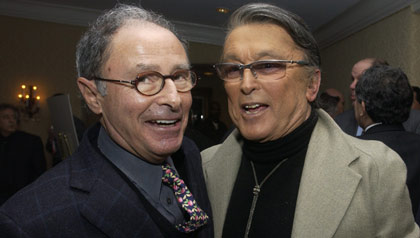 Peter Bart (left) and Robert Evans during the launch of Miramax Books' Dangerous Company at the Hotel Bel Air in Los Angeles.

That narrow (if not casually racist) definition of what qualified as freaky in the late ’60s has an insidious way of gurgling up in the book’s dialogue. Discussing yet another headache that Francis Ford Coppola had created for Paramount suits over his contract for The Godfather, Evans admonishes Bart: “He’s Italian. Just remind him the story has to smell like great pasta.”

To its credit, most of Infamous Players smells like pretty good pasta. Bart, a seasoned journalist, skillfully details the creative output that buoyed, then sank, his fellow Paramount execs: The Conversation, Chinatown, and The Godfather Part II reeled in a combined 25 Oscar nominations in 1975 (and won seven), yet just nine years later Evans helped dish up Coppola’s notorious turkey, The Cotton Club.

Bart doesn’t hesitate to enumerate the artistic misfires of others, nor does he hog the credit for what were clearly his own successes. He waxes snarky only in the case of Redford, dismissing the star of the 1969 Paramount hit Downhill Racer as a preening popinjay. Grudgingly, Bart acknowledges that Redford’s Ordinary People (1980) “achieved widespread mainstream recognition.” Would it have killed him to mention that the film also won four Oscars?

Bart can be appealingly self-deprecating (“I felt like a teenager who’d been invited to an orgy but was too timorous to partake,” he writes of his awkwardness at an Evans bash). But he was a Hollywood executive at heart, with that species’ distaste for honest looks in the mirror. Dissecting the studio’s lush, ambitious and ultimately failed adaptation of The Great Gatsby, for example, Bart itemizes the bum casting of Farrow and Redford, the overall lack of enthusiasm for Coppola's script, and the movie’s fulsome promotional push (tie-ins ranged from a brand of Scotch to a chain of hairdressers). But he never seems to notice the obvious metaphor: Paramount Pictures was itself a monumentally Gatsby-esque place — so much money, so much ambition, but so much empty posturing and hubris, too.