She went blind in her 50s, but Eva Rutland kept writing. She was good at it, and it sustained her. Now, at 93, Rutland is working on her second memoir. 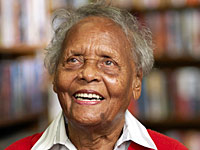 If anything, she says, she writes better blind; she can retreat into her memories and creative thoughts without any distractions. And that's a key reason she once averaged two novels a year, crafting "sweet" romance novels set in 1800s Regency England and eventually becoming one of the most prolific and best-selling writers in her genre.

"I love making my characters," says Rutland, who calls her talent "a gift." Born in Atlanta and now living in Sacramento, California, she has always written stories, radio plays, musical comedies — anything that required putting pen to paper. As a young mother in the 1950s, when racial segregation was the norm and few mainstream magazines would publish black writers, she gained surprise success.

While raising her children in Columbus, Ohio (where her Air Force – employed husband moved the family after the war), Rutland started writing seriously, submitting an article called "Elsie and God" to Redbook magazine, which published it in 1952. The topic? Her belief that her four black children were the same as their white counterparts, "just as precious and just as fragile." As she recalls, "I was just telling white people to please be nice to my children.

In subsequent articles she explored other common ground, writing of her love for her family. These early pieces formed the basis of her first memoir, When We Were Colored: A Mother's Story, published in 1964, the year President Johnson signed the Civil Rights Act.

Her straightforward recollections of family — assailants used switchblades to cut her brothers, then teens, in a hate crime; years later a school-age daughter sobbed when a white neighbor refused to play with her — resonated with readers. Later, Princeton scholar Cornel West lauded the 2007 reissue of the memoir: "Eva Rutland has done us all a grand favor," he wrote, "to tell the powerful and poignant story of the courage and love of a black mother in a society that devalues black children."

But Rutland also enjoys life's lighter side, so she began to write fiction in the late 1960s and early 1970s, after the last of her children had left for college. She was already losing her sight due to retinitis pigmentosa — an irreversible genetic condition — yet she insisted on writing professionally. And since she could write, she refused to learn Braille: "I just didn't think it was necessary for me." She dictated stories into a tape recorder and painstakingly transcribed them on a typewriter.

After years of typing and revising, she sent her novels to Harlequin in the early 1980s. Her first Harlequin novel, To Love Them All, was published in 1988. By 2001 she had published more than 20 novels and had sold more than 6 million copies worldwide.

Rutland's pace has slowed, but she still works at her craft. Today she uses a laptop and voice-recognition software to digitally record her words; sometimes she also receives help from her daughter Ginger. Although she spends time with family, friends, and fans (at book signings), her second memoir is top of mind. But she also continues to think about Regency England, as she plots how the poor daughter of an actor will marry a dashing aristocrat. That story, she hopes, will grow into her newest "sweet" novel.