As one of the icons of the civil rights movement, the Rev. Joseph E. Lowery has a full winter calendar. It started with celebrations for Martin Luther King Jr. Day and continues with events honoring Black History Month. 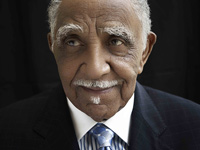 "I'm not worn out, but I'm stubborn," says the 89-year-old Lowery of his busy season. He recently found himself in Washington to accept the John Thompson Legacy of a Dream Award during a ceremony at the John F. Kennedy Center for the Performing Arts. The commendation is given each year by Georgetown University during the King holiday weekend. He is also a 2009 recipient of the Medal of Freedom, presented to him by President Obama.

Being lavished with awards and accolades is nothing new for Lowery, but he is on to new things. After years of speeches to congregations and world leaders, Lowery has written his first book, Singing the Lord's Song in a Strange Land, a collection of thoughts, sermons and essays.

"My family and the people around me kept reminding me how lazy I'd been that I hadn't put some of these things down in writing," Lowery says when asked what took him so long to write a book. "I guess I got tired of being nagged."

An ordained minister in the United Methodist Church, Lowery says his book binds civil rights, justice and religion to responsibility — making the issue of civil rights a moral imperative. He says it is impossible to separate the two.

"The whole issue of justice and civil rights is a religious issue," the Alabama native says. "The whole movement I took part in was working with God in his plan for his people and his will for his people in my perspective. I never saw it separate from church and religion."

The title comes from a well-known speech that Lowery has delivered several times to audiences. It's a challenge to sing the Lord's song in the midst of oppression, Lowery says, so he hopes the book gives others encouragement to do so.

When he made his entrance onto the national civil rights stage, Lowery was a pastor in Mobile, Ala. The NAACP had been outlawed there, and a woman named Rosa Parks had set off a statewide controversy by refusing to give up her bus seat to a white passenger in Montgomery. Lowery, who had been an activist as a minister, found himself in meetings with a younger pastor from Montgomery — Martin Luther King Jr.

"We became friends and were friends until his death," Lowery says. "When I speak and tie Martin to the spiritual faith, there is still a reaction in the crowd. I'm so thankful he is remembered."

The two men began to meet with others throughout the state and nation, and eventually organized the Southern Christian Leadership Conference (SCLC) in 1957, which became an engine to address voter rights and public transportation issues. The organization is where Lowery spent much of his life's work.

Through that work, Lowery encountered persecution and recalls some of those episodes in his new book. In 1960, he along with four other ministers ran an ad inthe New York Times critical of Alabama Gov. John Patterson and city commissioners in Montgomery. The ad was signed by people such as Sammy Davis Jr., Harry Belafonte and Eleanor Roosevelt. The city officials filed libel suits against the Times and the four ministers, winning judgments for malice. Because the ministers could not raise bond, their personal properties were seized.

"In Mobile, they took my car, a Chrysler. I will never forget the sight of my three daughters crying in the doorway of the parsonage as the wrecker towed the car away," he writes. "A few weeks later, they sold my car at an auction for less than nine hundred dollars."

The judgments were ultimately reversed by the U.S. Supreme Court, and the case is often seen as the classic ruling on libel.

Lowery says he is glad that government worked in that case and often still gets it right.

Today, when he sees government he can't help but think of President Obama. Lowery says he is thrilled his civil rights work, along with the work of so many others both black and white, helped to pave the way for history being made in the White House. He may be remembered by a new generation for delivering the benediction at Obama's inauguration, but hopes he is remembered for much more.

"I do hope that people will remember that here was a guy who preached and tried hard to apply lessons of the Gospel to the lessons of life. He used moral imperatives to everyday problems like the aged, livable wages and good housing and health care," Lowery says. "All life is sacred and all belong to God. It says the earth is the Lord's, and God meant it."