Alice Honeywell and Bobbi Montgomery consider themselves "word nerds." Before they retired, Alice, 62, was an editor and publications director at the University of Wisconsin. Bobbi, 64, taught high school English and journalism in Ohio. Yet it didn't occur to them until they were halfway across the country on a postretirement bicycle trip to write a book about their adventures.

"We were in a cafe somewhere in North Dakota," says Alice, "and the person we were talking to seemed to like listening to our stories and said, 'I want to read your book!' Bobbi and I looked at each other and said, 'Book? Us?!' " 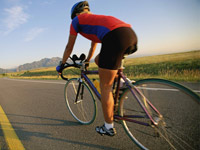 The result is Across America by Bicycle: Alice and Bobbi's Summer on Wheels. It recounts their three months of pedaling from Astoria, Ore., to Bar Harbor, Maine — by way of Washington, Idaho, Montana, North Dakota, Minnesota, Wisconsin, Michigan, Indiana, Ohio, Pennsylvania, New York, Vermont and New Hampshire. They dodged wildfires, worried about snakes and bears, braved intense heat and drenching rainstorms. Most of all, they stopped along the way to chat with the people they met.

The two women had met on an informal bike trip Alice led through Nova Scotia. They'd been on weeklong bicycle trips together since then, and exchanged cards at Christmastime, but otherwise didn't know each other very well. Alice decided that she wanted to ride across country after she retired and began asking around to see who else was interested. Among her bike-riding comrades, only Bobbi planned to retire at about the same time. "So that," says Alice, "is how we ended up together."

They learned biking across country is filled with the sort of unexpected stresses that can rupture a partnership — as reflected by a bike-shop owner in Wisconsin who'd met other such pairs before Alice and Bobbi wandered in. "Still talking to each other?" he asked when he heard what they were up to. "Then you're having a good trip."

They were, indeed. The adventure forged a deep friendship that lasted well beyond the 3,500 miles they spent together. They both spoke with the AARP Bulletin about their journey.

Q. What were your secrets to getting along?

Alice: Flexibility and an ability not to try to control another person. We both like to be in charge, but neither of us is a control freak. We trusted each other's competence.

Bobbi: Also, we wanted to make the whole trip. So if we had to do something that normally was not a favorite thing to do, it didn't matter: It was all for the trip. And we both had the same objectives — it wasn't just the physical challenge and it wasn't just to see our country, although those were important. We wanted to know what life was like in other areas of the country.

Q. How were the people along the way? Did people in one region treat you differently from another?

Bobbi: You know, the people out West were so friendly and so wonderful, and we wondered how the people out East would treat us. But they were just as friendly. There was no difference.

Alice: We found that when we were stopped in the middle of the country looking at a map, any vehicle that came along would stop and ask us if we needed anything. We learned that we didn't have to worry — that we would have help if we needed it.

[Read an excerpt from Across America by Bicycle.]

Q. Did you accept it, the help?

Bobbi: Alice was reluctant to take people up on their offers. I'm from the East Coast originally, but she's a Midwesterner: She didn't want to be a bother.

Alice: One time, we pulled into a motel just as the clouds were bursting. A man standing in the doorway of the room next door reached into his pocket and took out his keys and said, "Here, take my truck and go into town and get yourselves a decent meal." This was before I took Bobbi's message seriously, so I said, "Oh no, we'll be fine." When Bobbi heard she said, "Alice! You can't do that!" I realized that we had to look at it from the other point of view: People get a lot out of giving, and we have to learn to accept their largesse.

Bobbi: Alice, I'm so glad my lectures have done their job and you see it my way.

Q. Did you ever have to worry about your safety?

Alice: We were maybe a little bit concerned at the beginning, but we learned that we didn't need to be. The people we were most reluctant to engage with were some of the nicest people.

Alice: Yes, street people, rural street people, homeless people. Then it occurred to us what we looked like, and we realized that they may have seen kindred spirits. And they would invariably say, "Now you girls be careful, it's a dangerous world out there!" But we don't think it's as dangerous as people think.

Q. Were you ever scared?

Bobbi: In Walla Walla, Washington, on July 4, we were walking to the fireworks at the fairgrounds. Some young men were hanging around, and I noticed one guy checking us out. I had seen enough of this behavior: With all my years of teaching teenagers, you can tell what's coming.

Bobbi: You know how you usually say, "I'm going to ignore this, this is ridiculous"? That time I said, "I'm not ignoring this feeling." I think he was going to mug us. Alice had memorized the number of a cab company, so we kept walking, and called a cab. But that was off the bike, we were in street clothes, so I don't really think of it as part of the trip.

Q. Did the trip change you?

Alice: Here's one thing that amazed us: The farther we got across country, people began to perceive us as tough. This cracked me up, because I don't think I could hurt a flea.

Q. Why do you think they did?

Alice: I guess because we had good leg muscles, and we'd gone so far. To most people this seems like a very difficult thing to do.

Alice: I guess, but it didn't seem so at the time because our legs got so strong.

Q. It sounds like it was good preparation for retirement.

Alice: You bet. We loved the way of life — the camping and the simple living of just eating, sleeping, writing in our journals and doing our laundry. The biggest thing for me is that I came to value more simple living. That's not to say I'm good at it.

Bobbi: [Before retirement] I had a difficult job that took a lot of time, I was raising children by myself, and I was totally overscheduled. On this trip I found out that not having lots of things to do all day long was good. My vow when I came back was to not overschedule.

Alice: I'm probably as busy in retirement as I was when I was working, but the beauty of it is that I choose what I want to be involved in. Although seeing everything we saw gave me energy to want to see more and to do more.

Alice: The moment I recall was when someone giving us a lift across a dangerous bridge asked us a question no one else had: "What was your favorite scenery?"

Alice: We thought of the beautiful, beautiful things we'd seen, from Mount Hood to the cascades we saw above the Columbia Gorge, the Bitterroot Mountains and Lolo Pass, the beauty of Montana, the never-ending wheat fields, then the "duck factories" in North Dakota — these prairie potholes with water in them, and who would think there'd be water birds in the middle of North Dakota? The endless sunflower fields and the flax, and then the wheat fields in Minnesota, and the lakes.

Bobbi: The thing is, we cannot say that there is one favorite place. Every state had its beauty. Every single state!

Q. If you were giving tips to travelers doing something similar, what would they be?

Bobbi: Talk to the locals! Don't just slide on through town, no matter whether you're hiking, biking, in the car, what have you. Immerse yourself if you can.

Alice: And take your time! By the time you've been in a cafe for an hour and a half, people realize, "Oh, why don't we have them come home with us for dinner?"

Q. You've talked about wanting to do a north-south trip. Is that still on the agenda?

Bobbi: We're discussing it now. We're trying to decide whether to go north to south or south to north.

Alice: We're planning to do this in 2011. We know that all we need is a good set of maps, a chunk of time, supportive people back home, and our camping gear. We're getting older — by then Bobbi will be 65 and I'll be 63, and our joints are not quite as young as they once were. I'm a little creaky in some ways.

Bobbi: Speak for yourself, Alice.