It wasn’t so long ago that all women who decided to become mothers past 35 were called “geriatric moms.” While that term is used less today, the message from the medical establishment can still be the same: “You’re too old.” Not for these women — and not for Sen. Tammy Duckworth, who at 50, just became the first senator to give birth while in office.  Meet three other dynamic, confident women taking on the new experience of motherhood at midlife. 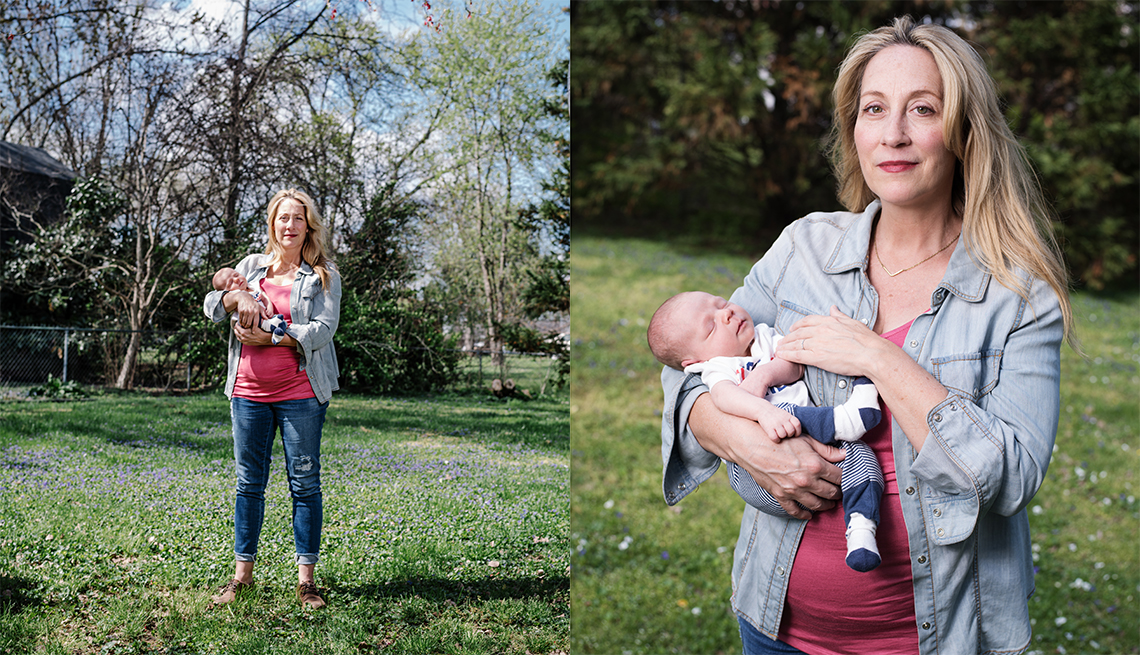 Amy Speace, 50 — a writer, performer and composer — gave birth to her first baby, Huck, on March 16. This was quite a shift, as she's been on tour most her adult life — first acting, then as a musician. She calls motherhood "one huge meteorite of overwhelm" as she takes on the challenge.

Having a baby at 50 — why?
I traveled and performed for 25 years — then got married for the first time at 48. My husband is 6 years younger than I am. It was never part of the plan for me to have a child, but that changed. We considered adoption — too costly. So we opted for IVF with donor eggs and got pregnant on the second try.

What about the risks?
Using an egg donor took out many of the risks.

How did your family and friends feel about you becoming pregnant at this age?
My friends think I’m a badass for having a baby at 50.

What was the reaction from doctors — did they think you were too old?
My ob-gyn assured me that I was physically healthy — in fact, she said I was probably healthier than many of her way younger patients. She kept me aware of the risks — but did not heavily emphasize them to stress me out.

Is it challenging to keep up with a newborn? Physically? Psychologically?
I’m used to late nights and early mornings — because I’m a writer. Psychologically, I’m still processing where science meets faith meets God meets routine.

Are you glad you had your baby when you did?
Absolutely. Had I had Huck at 30 or 35, considering who I was back then — I wouldn’t have made it.

Would you do it again?
Yes, for Huck! And if I were a few years younger, absolutely for another. But I just eeked into motherhood at the tail end of my physical limits. 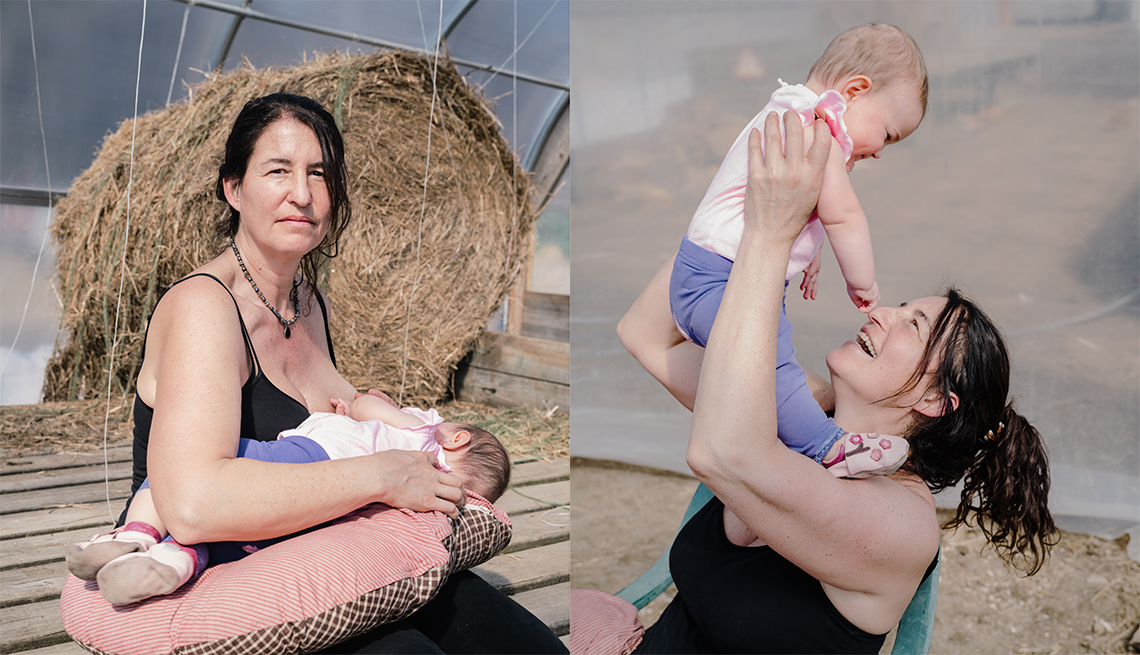 Being a farmer gave Laura Meister good health and a strong body — she credits both for her easy pregnancy and ability to keep up with her 6 month-old, Adeline. Still without a baby at 49, Laura decided to go for it as a single mom. "Ultimately, I couldn’t let go of the feeling that I wanted a child."

Having a baby at 50 — why?
I always wanted to be a mom, but I thought I needed a partner. I decided to go it alone at a seed-saving workshop discussing plant reproduction — cross-pollination, insect pollination, vegetative reproduction.

What about the risks?
I took the leap of faith. There were miscarriages in my past — but I made the decision to be confident.

What was the reaction from doctors — did they think you were too old?
I live in a semirural location and was seen as a “high risk” by my regional medical community. They did not want to participate in my giving birth.

So whom did you turn to for medical support?
A network of midwives. I felt a home birth was too risky but the midwives introduced me to a birthing center within a local hospital. Because my job is very physical, I am in good shape, so they looked at my age as just one factor among many — not the main concern.

Do you connect at all with younger mothers?
A mother is a mother, no matter her age. I’m meeting other new moms in yoga class who are half my age, and who give me advice. And I take it!

Are you glad you had your baby when you did?
If I could be 20 years younger and still have Adeline as my daughter. I would have loved that because I want to be with her as many years as possible. But it didn’t happen that way. It happened this way. 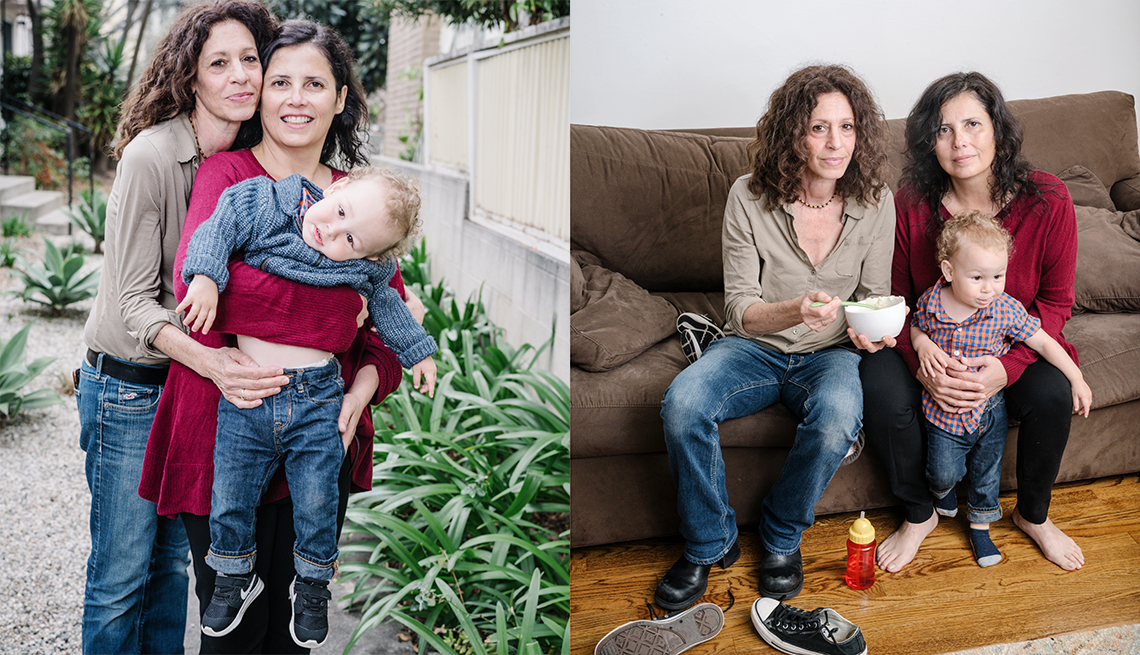 Hanging out with Lorena, Carol and son, Galileo. —Wayne Lawrence

Carol Rosenthal and Lorena Porras, a casting director and wine bar owner, respectively, adopted their son after fostering him as a newborn for 18 months. At 56 and 50 they never expected to be mothers, but they’re thrilled with the happy plot twist. They named their son Galileo because he “fell from the sky.”

You considered becoming parents at 55 and 49, respectively — why?
Carol: A few years ago, Lorena brought up being foster moms — she grew up in the foster system and knew there were kids who needed help. We looked into it and at that time decided against parenthood — way too much work and commitment — and went on with our very full lives.

Then how did your son Galileo happen?
Carol: Lorena's half-brother and his girlfriend had a baby born addicted to drugs. They called us for help, and we drove to the hospital to see him. On the way home, Lorena decided to foster the newborn to get him healthy. And I agreed.

Is motherhood what you thought it would be?
Lorena: Yes and no. When people say that it is so fulfilling and rewarding, now we know what those things feel like. But it’s much more than I could have imagined.
Carol: It’s harder, too — like Groundhog Day.

Is it a challenge to keep up with a toddler? Physically? Psychologically?
Carol: Sometimes I’m not up to par — but I’m in perimenopause! All my neurosis is in one place: Gali’s safety. It’s exhausting. But his energy for the most part infuses ours. I’m going with that.

Do you worry that teenage Gali will think you're too old-fashioned — or just plain too old?
Lorena: There is something universal to the "embarrassed-of-my-parents" stage in life. I hope to take that in stride and remind my guy how "cool" I am.

Would you do it again?
Carol: If I was assured we’d get Galileo again, a resounding yes. But I wouldn’t start an adoption process of my own accord! Galileo came to us out of the blue and, of course, we couldn’t say no.

Maryjane Fahey is the editor of Disrupt Aging.
Sharon Greenthal is a freelance writer.