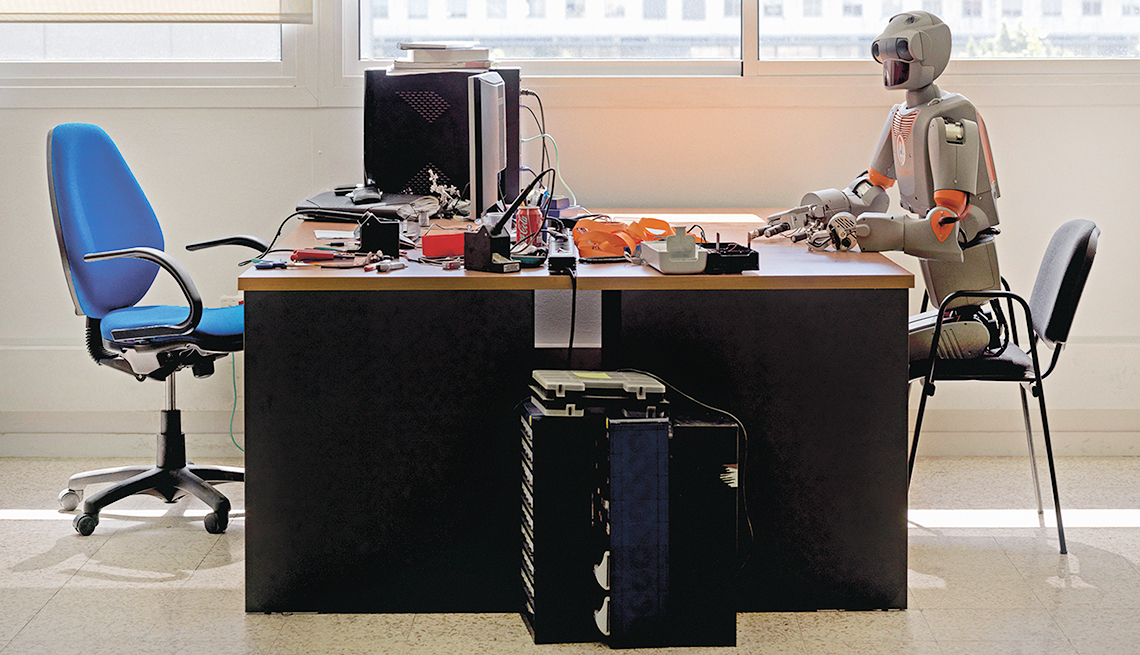 Can a robot replace you at work?

Hear that metallic clatter off in the distance? It's the sound of self-driving cars, package-delivering drones, voice-activated digital assistants, hospital robots and countless other machines waiting to take over your job.

Yes, the bad news is that the age of automation has arrived. But the good news is that most jobs are probably safe for a long time, and such technology can present opportunities and rewards for workers willing to embrace or get ahead of it.

Almost all jobs and occupations can be automated to some degree, says Mehdi Miremadi, partner at McKinsey and coauthor of the reports on automation. "But just because the technology is there doesn't mean that your job definitely will get automated," he says. "While it's true that, within 10 years from now, the tasks we perform today will likely involve more interaction with robots and machines, we estimate that it will take up to five decades before close to half of all economic activities could be automated."

Morag Barrett, coauthor of The Future-Proof Workplace, agrees there's no immediate cause for alarm. "The important thing is not to ignore technology," says Barrett. "Instead, start taking the steps now that will keep you fresh, nimble and potentially marketable in an ever-changing landscape," says Barrett.

Some professionals, like Sharda Cherwoo, have also pursued a tried-and-true credo: If you can't beat 'em, join 'em. After seeing a demonstration of how rapidly robotic process automation software could process insurance claims, the 58-year-old tax partner with Ernst & Young LLP in New York convinced her firm to use the software and was rewarded with the responsibility of supervising that implementation. By automating certain tasks, the firm's tax professionals can focus on advising clients, Cherwoo says.

And therein lies the silver lining: Work-assistive technology can actually be a positive thing. "As more baby boomers retire, the size of our labor force is going to get smaller," Miremadi says. "To maintain the same level of economic growth and well-being, we'll need higher productivity from the workers that remain. Automation will be a key factor in driving that productivity." He says automation may raise productivity growth worldwide by up to 1.4 percent a year.

History also shows that, with every technological innovation, new job sectors and positions are created — providing opportunities for workers to shift into fresh or updated roles that capitalize on improvements in computing power and artificial intelligence.

"However, the skill sets of people likely to suffer job losses from automation may not be transferable to the sectors that will see job growth," says Brian Kropp, human resource practice leader for CEB, an Arlington, Va.-based consulting company. "Companies and government will be faced with the significant challenge of how to reskill those negatively impacted to make sure they are competitive in the economy going forward."

To help stave off the robots, consider beefing up on distinctively human talents, suggests Linda Sharkey, coauthor of The Future-Proof Workplace. "The need for soft skills will be critical," she says. "For companies to innovate, solve problems and leverage technology, they need people with great interpersonal skills who are self-aware, open to new ideas and able to constructively explore new ways of doing things and share ideas."

Also, like Cherwoo, don't be afraid to explore automation and use related resources to improve your productivity and efficiency. "Venture outside your comfort zone to expand your skills and alter your processes. Look at automation as an opportunity rather than a threat," says Susan Joyce, owner of Job-Hunt.org in Marlborough, Mass.

You can also look for ways to teach yourself how to work better with robots. "Acquire better computer skills and take free online classes in data science, data analysis and statistics. Intuitive decision-making is being replaced by data-driven factual decision-making, so it's important to become somewhat competent in data science concepts in order to make better business decisions," Miremadi says.

Keeping an open mind and being curious will translate whether you're talking to a person or a robot.

Erik J. Martin is a Chicago area-based freelance writer whose articles are featured in The Costco Connection, USAA Magazine, Reader's Digest and other publications. He often writes on topics related to technology, health care, business, insurance and entertainment. He also publishes several blogs, including martinspiration.blogspot.com and cineversegroup.blogspot.com.