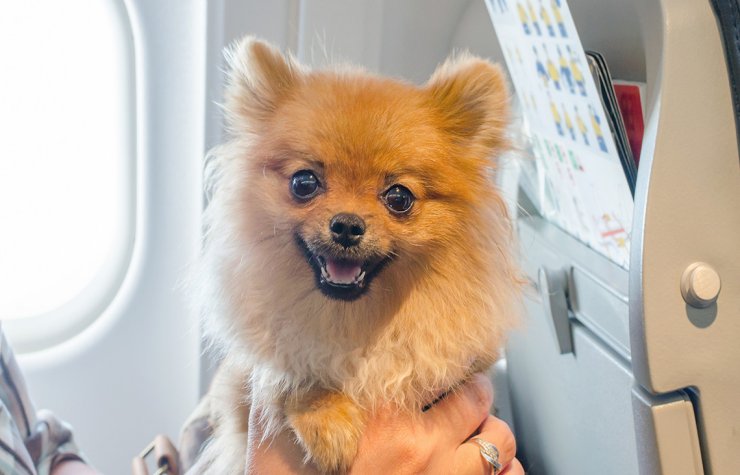 En español | Forget turbulence. For travelers with allergies, common triggers such as perfume, pet dander and peanuts can turn a routine flight into an uncomfortable or even unsafe experience. But experts say there’s no reason for allergic passengers to fear flying. With the right preparation and in-flight caution, you can prevent an allergic reaction when you fly.

A few things to keep in mind:

“All flights will have pet dander, even without pets on the plane,” says Kenneth Mendez, president and CEO of the Asthma and Allergy Foundation of America. That’s because pet dander — the microscopic skin particles that can cause sniffles, sneezes and more for people with sensitivities — is brought aboard on people’s clothing. Once present, it remains suspended in the air for long periods.

To minimize exposure, Mendez suggests calling your carrier in advance to talk about your allergy and request a seat far from any animals on your flight. You can also ask the flight crew for a seat change if you find you’re sitting near an animal.

Keep in mind, he adds, that service animals are legally allowed to accompany their owners, which means it’s impossible for an airline to guarantee a completely animal-free cabin. But it’s worth knowing your airline’s pet policy to get a sense of just how many animals might be present. Budget carrier Ryanair, for example, doesn’t allow pets (only service animals), while American Airlines allows up to seven pets, not including service animals, on any given flight.

Wherever you sit, the best way to prevent an allergic reaction is to avoid inhaling the allergen, says allergist Tania Elliott, a spokesperson for the American College of Allergy, Asthma and Immunology. She notes that pet-allergic passengers can wear a mask onboard (look for one with an N95 rating), or, for a less conspicuous look, opt for nasal filters, which are small disks worn inside each nostril to trap troublesome particles.

Bring any necessary medications, such as rescue inhalers, antihistamines and epinephrine autoinjectors, in your carry-on luggage and keep them easily accessible during the flight.

Elliot also recommends nasal filters for passengers who are sensitive to fragrances, whether that’s a seatmate doused in perfume or one steeped in tobacco smoke. Since fragrance can be an asthma trigger, she says that if you’re very sensitive it’s reasonable to ask the flight crew if you can switch seats (most carriers don’t have specific perfume policies, but will try to accommodate seat changes for asthma-related reasons).

Unlike those with pet allergies, peanut-allergic passengers don’t have to worry about having a reaction to particles they inhale from the airplane’s recirculated air, Elliott says. That’s because the peanut protein that triggers an allergic reaction doesn’t stay suspended in the air for long. Reactions are caused by contact — touching a tray table that has trace amounts of peanut dust and then your mouth, for example.

To prevent that sort of exposure, Elliott and Mendez advise peanut-allergic passengers to thoroughly wipe down their seat and surrounding surfaces, including armrests and the tray table. In June, the Department of Transportation affirmed that airlines must allow passengers with severe nut allergies to preboard their flights in order to do so.

Elliott says alcohol-based hand sanitizers aren’t effective at removing allergens. Instead, she recommends that her patients carry a small amount of dish soap and water to spray on surfaces, then wipe it off with a cloth. According to the nonprofit group Food Allergy Research & Education (FARE), disposable cleaning wipes are also effective as long as they contain a detergent.

As with pets, peanut policies vary by airline. Some don’t serve peanuts at all, others allow passengers to ask ahead of time that peanuts not be served on their flight, and some might institute a nut-free “buffer zone” around a passenger who requests it. Regardless of the policy, other passengers can still bring peanuts on board, Elliott notes.

Besides wiping down your seat and other surfaces, she says, you might consider booking an early-morning flight, since planes are likely to have the fewest allergens after their overnight cleaning.

And be wary of eating airline food, even if it doesn’t contain peanuts as an ingredient. The vast majority of carriers cannot guarantee that their meals and snacks are completely peanut-free (they may contain trace amounts).

In case of emergency

Bring any necessary medications, such as rescue inhalers, antihistamines and epinephrine autoinjectors, in your carry-on luggage and keep them easily accessible during the flight.

Elliott also recommends traveling with a letter from your allergist confirming your allergy and need for medication. Medically necessary liquids, gels and aerosols are exempt from Transportation Security Administration (TSA) liquid limits, but the agency asks that you remove them from your bag and notify the TSA agent so they can be screened separately.

Other than medication, “the most important thing,” Elliott says, “is to have an anaphylaxis action plan before you go on a flight, and to have it down pat.” If you start to experience a severe reaction onboard, notify the flight crew and anyone you’re traveling with immediately. Then, start following the steps your plan lays out, which may include lying flat on the ground with legs elevated and administering epinephrine or other medications.

Airlines have their own internal procedures, including communication with on-the-ground medical consultants and any medical professionals on board, to determine whether the plane will make an emergency landing.