En español | Using their own ingenuity and automated programs that target thousands of computers simultaneously, hackers can quickly crack many simple passwords and break into online accounts. And once they sign in as you, they may change the password, locking you out of your own account.

One study finds that a successful hacking attack occurs about every 39 seconds. But in just a few seconds of your own, there are some ways you can strengthen your password for better online security.

As cyber crooks hone their skills, the traditional recommendation that passwords contain at least eight characters has changed. Passwords should now be at least 12 characters, say researchers at the Georgia Tech Research Institute. In their tests, they learned that eight-character passwords can be cracked in about two hours, but adding just four additional keystrokes to a password could raise that to a theoretical 17,000 years.

Longer passwords are a good first step, but even more important is making each character count. And yet one recent survey found that half of 2,500 surveyed computer users never employ symbols such as &, >, # or @ in their passwords. Worse, many still only use lowercase letters or just add numbers at the end of words, such as the foolish and easily hacked "password123."

In one study, a British researcher noted that bolstering an all lowercase eight-character password with a few well-placed symbols, numbers and a combination of upper- and lowercase letters would take commercial hacking software about 200 years to crack.

Steps like these serve to blunt the hackers' software, which works by trying various versions of words in an English dictionary and even combinations of them.

Sometimes it can be easier to recall "harder" passwords. >> 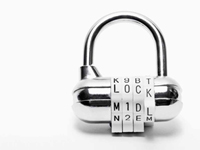 Of course, the more complicated a password, the harder it is for you to remember it — explaining why you may often quickly change the cryptic passwords initially assigned when you open a new online account. After all, who can remember "iH3k&tR#rS-c"?

You can — by taking some new advice: Choose a sentence, phrase or song that you can easily remember, and add a few keystroke tweaks. The above 12-character password, for example, is a hacker-resistant version of "I have 3 kids and they are really super-cool" (which is true for me, but hackers, take note: I'm not using it as a password).

Your favorite song? "When I'm feeling blue/All I have to do/Is take a look at you" becomes "WiFbAiH2DiTaLaU," with each word's initial letter alternating between lower case and capital. Then "A Groovy Kind of Love" becomes a stronger password.

And while you shouldn't use birthdays or anniversaries as a password — those dates may be available in online public records and used by hackers who specifically target you — those easy-to-remember dates can be tweaked for better protection. If you must rely on your June 10 wedding, for instance, consider including lesser-known info — such as the initials of your maid of honor (Susan Jones) and honeymoon destination (Miami), à la "sj@0610#miaFL."

Of course, this level of complexity may not be for everyone. But give it a try — if you create (and remember) passwords like these, you'll have nearly uncrackable security.