A developing technology will allow patients to forgo both long lines at the pharmacy and complicated medication schedules. An implantable microchip may be available in four years that delivers medicine automatically without the patient having to remember to take his daily dose.

See also: 5 things your doctor dislikes about you. 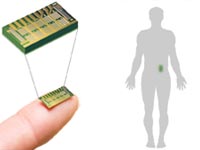 A microchip that is surgically implanted into a person's body could make trips to the pharmacy obsolete.

Professor Robert Langer of MIT, developed the concept of an implantable drug delivery system after watching a public television documentary on computers. The small chip, which is implanted below the waist and under the skin, can release the correct amount of medicine into the body at precise times. MicroCHIPS, the company responsible for the implant delivery system, concluded its first human trials outside of Copenhagen, Denmark.

Robert Farra, COO of MicroCHIPS, and Langer are already looking to other new technologies that can be built around the microchip.

You may also like: Give your medicines a checkup lately?