Some of Fred Straub's male friends feel shock and awe when they learn about his marital arrangement. "They say, 'Betty lives in Louisville and you're in Cincinnati and you date on weekends? How did you arrange that?!'" recalls the 64-year-old real estate developer.

See also: Marriage and money: Talk before taking the leap. 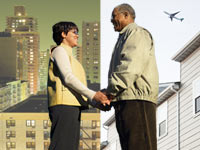 But for Fred and Betty, a couple married more than 30 years, the setup, in place since 2004, is definitely not cool. "If we were married to someone we didn't care about so much, maybe it would be a better option," says Fred, who rents a loft apartment in Cincinnati while Betty stays in their home two hours away. "We wouldn't have it this way if we didn't have to," echoes Betty, 60, research director for the College of Education and Human Development at the University of Louisville.

At her previous job, Betty thought she would be able to live with her husband in Cincinnati and work remotely and drive to Louisville to attend major meetings. But a large federal contract she had helped the organization get made this scenario impossible. "I was devastated," she says. "I felt like my ship had been sunk."

What has kept the relationship afloat is talking on the phone two or three times a day, being together most weekends, knowing there is an end in sight, and being grateful for two stimulating and well-paying jobs. Their salaries allow them to pay for their grandchildren's private school, clothing and travel to sports competitions as well as save for their own retirement.

"It would be a totally selfish act for Betty and me to live together seven nights a week," says Fred. "In order for that to happen, other people in the family would have to suffer some life-altering changes. We can make things happen with a few hundred dollars here and a few hundred dollars there. We look at it as smart investing in our grandkids' lives rather than the stock market. We're doing it because it will be important to them at some point even if we're not here."

More couples living separately but together

While separate households is old news to married academics, what has changed is the number of age 50-plus happily wedded couples in all fields who are finding themselves home alone Monday through Friday. The left-behind mates may decide to stay put because they believe they are going going to be uprooted from friends and family, or give up their meaningful job. Even if one spouse wants to move to be with the other, selling their house right now for a good price — or at all — may be impossible.

"Living apart is a phenomenon that is likely to increase for those over 50," says Susan Brown, codirector of the National Center for Family & Marriage Research at Bowling Green State University. "Two incomes have become integral to the financial health of marriage."

In this difficult financial period, getting a good job offer anywhere, especially if it includes health and other benefits, can be a feat. A recent Sloan Center on Aging & Work at Boston College/Rutgers University study found that it took more than two-thirds of age 55-plus job hunters more than a year to land a position.

Next: Any advantages to long-distance relationships? >>

Add greater longevity — living longer requires more money to bankroll retirement — and more women in the workforce to the reasons some married couples are living solo. "Many women left work for their kids, then got back into the labor market," says Deborah Smith, an associate professor of sociology at the University of Missouri-Kansas City. "They may now be in professional positions where they have to work longer to be vested in their pension or move up the ladder."

Whatever the reason, there are more options today. "Our image of life as climbing a ladder and reaching a certain point and then gliding over to retirement is very out of sync with reality," says Ellen Galinsky, cofounder of the Families and Work Institute. "Reality has different paths along the road: People are going to work, stopping work, starting a new career, losing a job, moving laterally instead of moving up, or working in different places. The national workforce is changing, and that's the new normal."

Betsy Bogin, 58, a Cheshire, Conn., realtor, spends one week a month, six months a year, working remotely from Gold Canyon, Ariz., where her semiretired husband, Martin Goldfarb, lives. During that time, Bogin and Goldfarb, married 34 years, take turns traveling to see each other and are apart one weekend and two full weeks a month. Bogin loves the job and the income it provides, while Goldfarb, 63, an airline transport pilot who owns and operates a charter business, loves the outdoor winter activities in Arizona, from hiking to golf to rowing crew.

While Bogin is not ready to retire and leave colleagues and close friends in her small Connecticut community, it's her two frail parents, ages 93 and 94, who make a move west out of the question, at least for now.

"It's great that Marty and I don't have to have the same dream to retire at the same time," says Bogin. "We talk to each other as many times as we ever did and sometimes even watch the same TV program at night with each other!"

Yes, Skype, text messaging, cellphones and email make it easier to stay connected today, but it's still not the real thing. Living apart can be lonely, difficult and expensive, although two salaries with benefits usually offset added living costs. "I rely on Marty for stability in hard times with my parents, even though he's here less," says Bogin. "I'd much rather have Betsy with me than 2,000 miles away, but she's on a different career timetable and taking care of her parents," says Goldfarb.

Some couples may not admit it, but find having their own space and time to themselves can be freeing. Frances Moseley moved to Washington, D.C. — where she grew up — for 14 months to work for the Red Cross, while her husband, Bud, stayed in Boston as an executive search recruiter.

"Of course I missed Bud and he missed me, but he travels a lot anyway," says Frances. "I could schedule evenings with friends without checking Bud's schedule first. I didn't have to hang up my clothes and I could watch TV until 4 a.m. if I wanted!" They originally thought that Bud would relocate to his firm's D.C. office after six months — maximum. But the timing was off for selling their Boston condo, and Frances' job subsequently ended.

Next: How to cope with unplanned separations. >>

For Bud, the 10-hour distance turned out to be less freeing than frustrating: "We knew economically and professionally the arrangement was meeting our needs, but emotionally there was a major gap," he says. Last year, the Moseleys were apart on their anniversary. Now that Frances has moved back to Boston, they are celebrating their 35th year of marriage the way they started, under the same roof.

How to cope with unplanned separations

"I don't think anyone sets out to be in this situation," says Tina Tessina, a psychotherapist from Long Beach, Calif., and the author of The Commuter Marriage: Keep Your Relationship Close While You're Far Apart. But if you do have to live apart, knowing that the situation is temporary helps, says Tessina. She also advises not mixing up the "how much I care about you" phone calls with "I had to call the plumber today again" and all the other dreary minutiae of day-to-day living.

For those wondering whether long separations make infidelity more likely, Tessina's own private practice and research prove otherwise. "I don't find it to be a bigger issue for those separated than those married and living together," says Tessina. "There is always the opportunity. Living apart has its positives and negatives, as does living together, so you have to focus on the positives and make those as good as possible."

Lynne and Michael Brenan have embraced this glass-half-full attitude. It's not that they are oblivious to the downside of their arrangement. "It's a drag to be by myself during the week, but it just has to be this way for now, so I deal with it," says Lynne, 61, a sales executive for a specialty food company. She lives in their home in Itasca, Ill., outside Chicago, where she raised their four children, now ages 26 to 35, and has two young grandchildren nearby; while Michael, 62, manages a hotel an hour and a half away in South Bend, Ind. He gets home Friday night and leaves Monday morning.

"For now, we're not in a financial circumstance where either of us can retire," says Michael, who had a heart attack five years ago and hopes to work until he's 70. Two incomes allow them to go together to Europe once a year; this year, it's Scotland and London. And they're saving for a condo they hope to buy in downtown Chicago once they stop working and can sell their home.

Right now, their nontraditional marriage is feeling little pain. "The time we spend together every weekend is magical and more important than it might have been otherwise" says Michael. "It really helps keep the sparks alive. We didn't plan on living this way, but it has worked out well for us financially and emotionally."

The Straubs are also realists. "It's not perfect, but it's OK for now," says Fred. As Betty explains it, "It's like the mythological story where we are all born as one egg that splits in two and roams the earth looking for its other half. Well, I found my other half in Fred. It seems like the egg gets split apart Monday through Friday, but when we're together on weekends, we're back whole and complete."

Sally Abrahms writes on aging and boomers for national magazines, newspapers and websites. She is based in Boston.