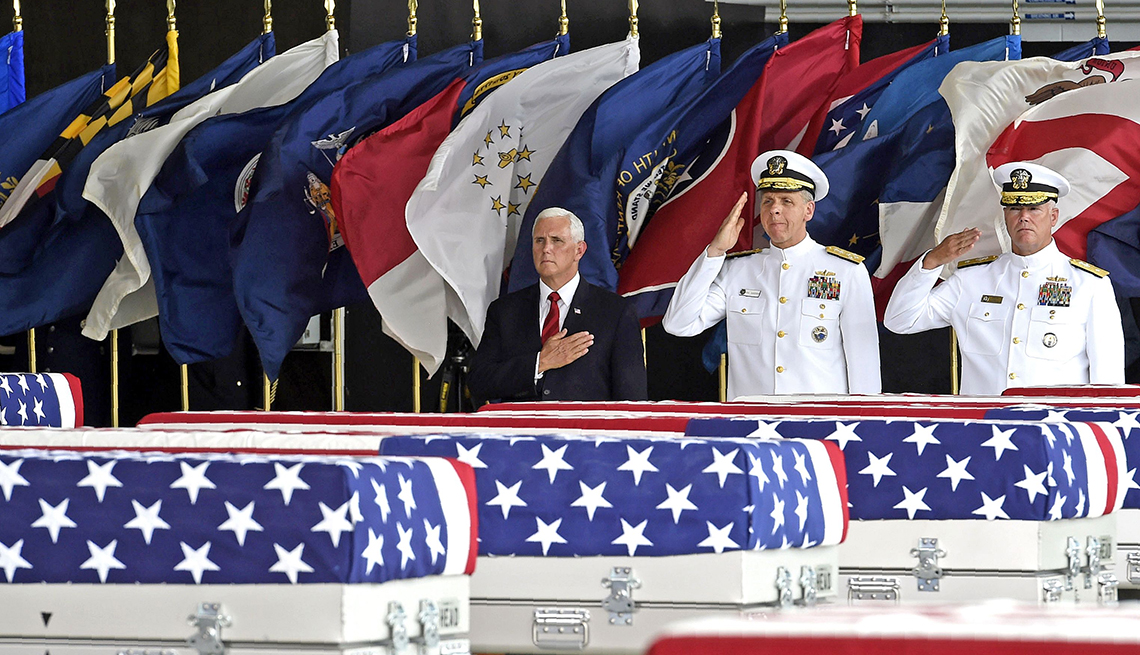 Sixty-five years after guns fell silent, the Korean War has not ended for the families of some 7,700 U.S. troops who remain missing and unaccounted for after serving in that conflict.

Veteran Clarence Stuck understands the raw emotion and cautious hope that many of them may feel this week as they watch the remains of 55 unidentified presumed U.S. soldiers return to American soil. He has lived it.

With a repatriation ceremony at Joint Base Pearl Harbor-Hickam in Hawaii and reception of the transfer cases by Vice President Mike Pence, the government begins the long process of identification of remains and, perhaps, offers some psychological salve to those wounded military families who are still waiting for news of a loved one.

Stuck, 86, from Manheim, Pa., had a long and agonizing wait himself. The retired Army master sergeant served in the conflict, as did his older brother, Cpl. Kenneth Stuck. The younger man was just 22, in 1950, when their mother wrote to tell him that his then-24-year-old brother, a tank commander, was missing in action (MIA). Not until 2015 did the corporal make it home.

Stuck recalls the heartrending call he got from the federal government while driving to see his son, Daniel, in Hershey, Pa. The caller asked him to pull the car over before telling Stuck: “This is the Military Casualty Office. We think we have found your brother.’’

Cpl. Stuck’s remains, along with those of hundreds of soldiers, had been located in a mass grave in a North Korean village and transported to Hawaii for identification. It had taken forensic experts several years to confirm Cpl. Stuck was among them. The family was told he had been a prisoner of war and probably died of starvation.

“It was sad. I cried like hell,’’ says Stuck, who with family members and friends buried his brother with full military honors. “For years I couldn’t conceive he was dead. But he was.’’ Within six months of receiving the news, Stuck suffered two strokes

Paul Cunningham, president of the Korean War Veterans Association, knows the Stuck family and says, “It had to be gut-wrenching all those years to never know what became of his brother’s remains. And that has to be where the anguish was.’’

“The Korean War ended for the young men who perished there, but for families of those whose remains have not been recovered, the Korean War never has ended.’’

Fought between June 1950 and July 1953, the Korean War is often called the “Forgotten War.” While it has received less attention than other wars the U.S. fought, the Korean War exacted an enormous toll.  Defense Department figures show about 37,000 Americans died in the conflict. About 7,700 American servicemen are listed as unaccounted for, of whom roughly 5,300 are thought to have been killed in what is now North Korea.

While the 55 remains just transferred are presumed to be U.S. soldiers, it could be that some may come from other nations. The U.S. and South Korea fought alongside 15 other nations under the United Nations flag.

The remains represent only a fraction of those believed to still be in North Korea. Tensions between the U.S. and North Korea thawed after a June summit between President Trump and North Korea’s Kim Jong Un, and the Pentagon said last week that U.S.-led recovery efforts might resume next year.

“What’s happening is important and positive for families of soldiers — they’re receiving 55 remains and getting closure,’’ onetime U.S. Ambassador and former New Mexico Gov. Bill Richardson tells AARP. “That’s the positive. The downside is that the North Koreans use this issue as a bargaining chip. They want something in return.’’

The return this week is the first time in more than a decade that North Korea has sent remains of U.S. troops to the United States. Richardson led a 2007 mission when North Korea — seeking to barter goodwill for the resumption of the lucrative U.S. military recovery program — sent the remains of six U.S. infantrymen back home. Richardson says that the federal government has paid North Korea between $22 million and $28 million for 620 remains and associated expenses since the 1990s, when the military recovery program was initiated under the Clinton administration.

Despite the return of the remains in 2007, President Obama did not resume the recovery program because North Korea continued to expand and test its nuclear capabilities. “The diplomacy trumped the return of the remains issue,’’ Richardson says. “In other words, if North Korea insisted on shooting missiles and being aggressive, we were not going to give back the military recovery program.’’

Nonetheless, Robert Storms, 67, of Brenham, Texas, says, “We are encouraged by the recent events — even with the games being played.” He and his three brothers “always have held out hope that our father’s remains will be returned.’’ Maj. Harvey Storms, declared MIA and presumed dead in 1950 after the Battle of Chosin Reservoir in the mountains of North Korea, was a decorated veteran who also served during World War II.

Endless quests of respect for their fallen heroes often are a family affair. Jeanne Edwards, 57, and brother Charles Edwards, 59, from Westland, Mich., refuse to surrender hope. Their uncle, Cpl. Charles Wade Shaw, was a casualty on a Korean battlefield at age 18.

“He begged my grandmother, and she signed the paperwork for him. She lived to be 99, not knowing what had happened to her son,’’ Jeanne Edwards said. “We will continue to [attend yearly government briefings for unaccounted soldiers] in hopes of coming to a resolution. All we are asking for is to bring our loved ones home.’’

Sherri Steward, 65, who lives outside Fort Worth, Texas, says her father, William Steward, fought in the Korean War; her uncle, David Steward, 16, was killed in action there. She often accompanies groups of relatives of MIA soldiers to South Korea to further their efforts. “You just cannot fathom the suffering that these families endure,’’ Steward says. “The Korean War ended for the young men who perished there, but for families of those whose remains have not been recovered, the Korean War never has ended.’’