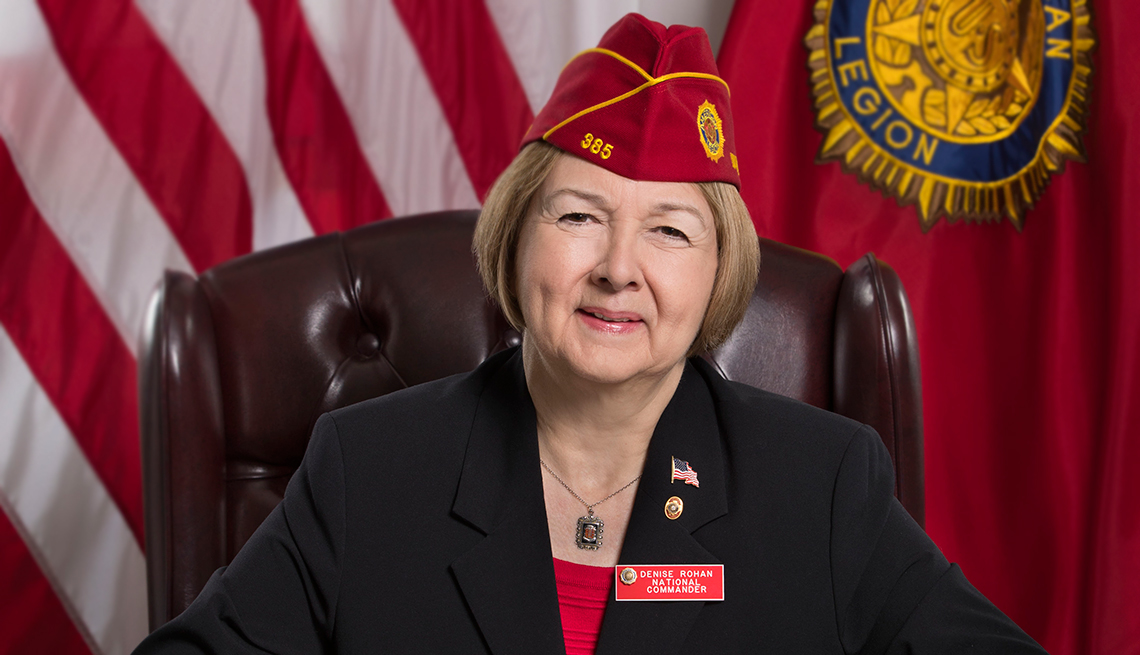 Courtesy of The American Legion

On the wall of an American Legion post in Marshall, Wis., hangs a photo of Denise Rohan, the new national commander of the country’s largest organization for veterans. The caption below that portrait — taken when she was state commander — is the part she delights in sharing today. “It reads, ‘She could have been a member of our Post. Remember, women are veterans, too.’ ”

“I’ve promised them one of my first national commander photos, too,” says Rohan, 61, whose connection to Marshall goes back 37 years, to the day she answered the door to greet a Legion recruiter intent on signing up her husband for membership. Rohan offered that she also was a veteran, and it was suggested that she join the women’s auxiliary — for military wives.

As much as she is thrilled to give the 2 million-member organization its first female commander in its 98-year history, Rohan describes her focus — which she stressed at the group’s annual meeting in Reno last week — as extending to every member of each military family. Her aim, she says, is to strengthen the web formed by the Legion’s many different branches, programs and members, so they can together better support everyone — from veterans returning from war with PTSD to families struggling with the void left by mothers or fathers overseas.

With so many national guard and reservists in particular facing multiple deployments to places like Iraq and Afghanistan, Rohan says it is the Legion’s business to support their families — especially since “we live in a society where their next-door neighbor may have no idea” that the mother or father beside them is shouldering a significant burden alone. “By the time we’re at the deployment service, we know the family,” she says. Over years of such goodbye ceremonies, she says, she has heard the same answer to the question of how the Legion can best support departing personnel: “They always say, ‘Take care of my family.’ ”

Another key part of Rohan’s personal approach concerns the return home. Advocating for more service officers to help veterans navigate a cumbersome benefits-claims process is high on her list of priorities. So is undoing the damage done to Vietnam-era veterans when they were denied the homecoming — and gratitude— they deserved years ago. “When Vietnam vets came into Legion posts they weren’t necessarily welcomed properly by WWII and Korean vets, and I'm sorry that happened,” she says. Ever practical, the former logistics instructor also notes that with so many Vietnam veterans reaching retirement age, they also have the time to be active Legion members. “I ask them to give the American Legion another chance,” she says — noting later in her candid and somewhat droll way that new members may need to hang in past the roll call and agenda items. “Often someone comes to a Legion meeting and they sit there and think, ‘This is the most boring thing I’ve ever done.’ But the actual work we do in the community to help lift up military families across this nation, that’s the beauty of this organization.”

Rohan, who joined the U.S. Army in 1974, is the second woman this month to be elected to lead a major veteran service organization. She joins retired Army veteran Delphine Metcalf-Foster, who was elected national commander of the Disabled American Veterans organization, which has nearly 1.3 million members.