Activate Staying Sharp and you can create a brain health plan that includes games, activities, recipes and more. Try it today!

Journey back in time to the brink of the Civil War, when a 59-year-old abolitionist took the fight against slavery into his own hands in hopes of ending human bondage forever. On Oct. 16, 1859, John Brown led a raid on the U.S. arsenal at Harpers Ferry, in what was then Virginia, while some of his men captured local slave owners and freed their slaves. Quickly and violently quashed, the rebellion was brief, but its effects would prove eternal.

John Brown played a major role in the Civil War, leading the fight against slavery. — Art by Chris Wormell/MENDOLA 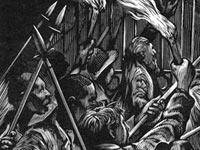 Listen to a clip from the Midnight Rising audio book narrated by Dan Oreskes.

Pulitzer Prize-winning writer Tony Horwitz takes us into the mind of Brown, using letters and interviews to perch us on Brown's shoulder. It is a thrilling vantage point, allowing us to watch the failed businessman as he plotted battle plans and recruited coconspirators for his attack.

AARP Bulletin talked to Horwitz, 53, about this anti-hero, the enduring attraction of the Civil War and how his life as a writer has evolved over time.

Q. What fascinated you about John Brown?

A. Brown raises uncomfortable questions about whether violence and defying your government are ever justified. We Americans like to see our stories in black and white, hero and villain. It is difficult to do that with Brown — he's hard to either love or hate. He led a home-grown attack against the U.S., but today everyone would agree that slavery was a terrible wrong that needed to end. One of my hopes for the book is that my readers have a feeling of suspense, figuring out how to feel about this man.

Q. Unlike your past books, you're not a character in this narrative. Why did John Brown's raid call for a different treatment?

A. I definitely had my temptations: I went to Harpers Ferry for research and the ranger told me that a John Brown beard-growing contest was going on in town. In my former incarnation I would have made a beeline there. But this story was so good, I really wanted to get out of John Brown's way. I felt it would be jarring to interrupt the historical narrative with my own antics.

Q. What did it feel like to be so close to a zealot for so long?

A. As one historian said, researching John Brown can be a bit like getting stuck in the Old Testament and being unable to get out.

Q. Do you empathize with him?

A. Brown is not a warm and cuddly figure. But I grew to admire aspects of his character. I am in my 50s now, and here is a man who, in his mid-50s after a long and ugly career as a businessman and farmer, remakes himself as an abolitionist. He redefines his life around a new task and really triumphs. However you feel about him, I took some inspiration from that.

Next: Parallels between Brown and modern-day terrorists. >>

Q. What parallels does Brown have with modern-day terrorists?

A. Today, "terrorism" brings to mind the modern era and the mass slaughter of innocents. Brown used terrorist tactics in that he sought to strike fear in the minds of slaveholders. He wanted to show them that Northerners would push and fight to free slaves, and that the slaves themselves might rise up against their masters.

Q. You write that this act galvanized the nation in a way that decades-long peaceful abolition campaigns had not. How so?

A. Brown was the right man for that moment. He was the catalyst that helped spark the Civil War. We can argue about whether it was necessary for more than 600,000 Americans to die for slavery to end, but I think he saw the future and he hastened it.

Q. There is some argument that Brown knew his mission was doomed before launching it. After so much primary research, what do you think?

A. He recognized that his quixotic mission might well fail — he equally prepared for triumph and for being shot. Rather miraculously, he survived the raid, and then ironically, having failed, a month later he really triumphed through the power of his word and his courage facing death. His communications from prison really galvanized the North.

Q. What was his message?

A. Brown's writing and speeches have a plainspoken, direct moral argument. He states clearly that slavery is a sin, and that it is not a sin to try and overthrow it. And if that's a crime, then he is prepared to give his life for the cause of freedom.

Q. This was a revolutionary statement?

A. Many Northerners at the time opposed slavery but were tolerating it, hoping to get yet another congressional compromise to sort of kick the problem down the road. Brown was saying, "No. The problem is here. The problem we need to face is now, and there is right and there's wrong. Pick which side you're on."

Q. You say that you love the story of John Brown's teen daughter. Why?

A. Annie Brown doesn't get much attention in traditional historical analysis on Brown. Here she is, a teen farm girl who is suddenly dropped into this great drama. She is sharing a secret mission with a band of romantic young men, holed up in the mountains of Maryland, in the months before the raid. I love her heart and her insight into this band of appealing, idealistic young men. Her writing takes us there in a way that no one else's does.

Q. How do you pick your book subjects?

A. Some book ideas just float through the window and hit you out of the blue. Others grow for years. This one had been sitting around in the back of my mind ever since I wrote Confederates in the Attic years ago. It's a piece of Civil War history that has been poorly understood. It touches on the broad question of why the Civil War happened. Despite the tens of thousands of books on the war, I think we still have a lot to learn about what drove Americans to slaughter each other by the hundreds of thousands. Harpers Ferry is essentially a preview of that.

Next: Writing process changes with age. >>

Q. This era is gripping to a lot of writers, including your wife, Geraldine Brooks. She won a Pulitzer for March, which features the men who funded John Brown's raid.

A. Geraldine had a lot to do with me writing this book. In March, some of her research led her to this group of intellectuals and idealists known as the Secret Six. These were John Brown's political behind-the-scenes supporters. She kept telling me, "You should do a book on the Secret Six." Finally, really just to get her out of my hair, I went and did research. Reading about them brought me back to Brown and wondering what it was that drove him and others to do what they did.

Q. What's the workday like with two writers in the house?

A. It's not as exotic as you might imagine. We shove our boys on the school bus and 10 minutes later we're at our desks. Basically we try and squeeze every minute we can out of the day before they return. I sit at my desk and Geraldine sits 20 feet away at hers, and we toil away. We do constantly call out to each other looking for a certain word or reading a sentence to ask whether the other one can improve it.

Q. Do you do all the reporting first, then sit down at the computer?

A. I write as I go because writing helps me figure out what pieces of the story I have and what I don't. It also shows me what material works on the page. You can have research that you think is wonderful but when you sit down to write it, it lacks color or is no longer a crucial element. You can see it should go on the cutting-room floor. I think better when I'm at my keyboard.

Q. How has your writing process changed with age?

A. One thing that I find is depressing about writing is that it doesn't get any easier. But that's part of what keeps it interesting. You do learn from your mistakes and come to recognize types of stories or kinds of materials that are not your style. I am not a nature writer. I describe landscapes, but I no longer try to write the way a novelist writes about nature. I'm more comfortable with dialogue and action and character.

Q. What do you read for pleasure?

A. I'm embarrassed to say I rarely get into bed at night and cuddle up with a history book. For pleasure I'm really a fiction reader. And it's often just whatever Geraldine recommends from the 10 books on her nightstand. I really love middlebrow works — not pulp, but not Proust.

Q. What advice would you give to a friend who wanted to be a writer?

A. Don't romanticize writing. Trying it is the only way to find out if the life fits you or you have any talent for it. So if you think you have a story to tell, get to work!