Bernard George has a passion for the past that began when he was a boy learning about his father's rich family history that goes back 300 years in New Bern, N.C. Today, that passion is evident whenever George dons his wool military uniform to participate as a Civil War reenactor.

"I was always interested in the Civil War, particularly as a young lad," says George, 60, a lifelong resident of New Bern and descendant of free African Americans who settled in a North Carolina village. "My grandfather told me that his grandfather fought in the Civil War." 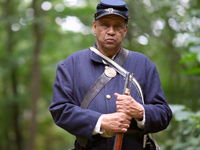 Mel Reid is a Civil War reenactor with the Massachusetts 54th Company B.

George is among the hundreds of African American reenactors across the country participating in events to commemorate this year's 150th anniversary of the start of the Civil War. Experts say African American participation in reenactments has increased in the past years due in part to the 1989 Civil War film Glory starring Denzel Washington and Morgan Freeman.

"Black soldiers are the most often photographed reenactors, because we are so unusual" to many people, George says.

There are 30,000 to 40,000 Civil War reenactors in the United States, according to Dana Shoaf, editor of Civil War Times. As one of them, George is on a mission to preserve the legacy of the U.S. Colored Troops, the regiments of black soldiers who fought for the Union.

George was born to Clementine Cooper Brown, a housewife and chef, and Joseph Grayson George, a master brick mason. His father's family came from Harlowe, N.C., a coastal farming and fishing village of free African Americans who moved from Virginia's Tidewater region.

George quickly noticed that the stories he heard at home about his great-great-grandfather fighting in the Union army were quite different from what he was taught in North Carolina's segregated Jim Crow school system. The stories weren't "something I could substantiate in the history books at school," he says.

As a youngster, George devoured works by black authors such as James Baldwin, H. Rap Brown and Frank Yerby. He was further exposed to his ancestors' history as a student at North Carolina Central University, where he studied history and political science.

George's love of black history led him to become a reenactor about six years ago. He joined the North Carolina Colored Volunteers, a group of about 20 men who represent the 35th, 36th and 37th U.S. Colored Troops Infantry and Battery B, 2nd U.S. Colored Light Artillery.

Last year, in celebration of New Bern's 300th anniversary, George and other New Bern residents traveled to Ghana with 10 high school students, where they met with African diplomats. It was one of his proudest moments.

"As a Civil War reenactor, I introduced Ghanaians to the history we shared as one of the first cities in North Carolina where African Americans gained their freedom, much like Ghana, the first African country to gain its independence from European control," he says.

As part of the Volunteers, George has visited schools and libraries, and has participated in community programs as well as battle reenactments. He, like other black Civil War reenactors, takes pride in lending voice to countless soldiers who fought and died in battle.

"There was a lot of animosity toward African Americans who fought in the Civil War," George says. "They were made to turn in their guns in South Carolina. In North Carolina, there was also an effort to disarm them."

As a living history reenactor, George has portrayed several historical figures. Among them is Abraham Galloway, a fugitive slave who became a leader of North Carolina's black insurgency movement. "His courage was legendary," George says.

Historical reenactments are a part of cultural tourism and, according to George, the North Carolina Colored Volunteers are important in attracting tourists to the New Bern area. Visitors "want to understand the area completely and be submerged in the local history and heritage, and that's what we provide."

While African Americans have long been taught they were onlookers of the Civil War, George says, the goal of the North Carolina Colored Volunteers is to counteract that thinking.

"We as a people are more than we have been taught we are," he says.

Macy L. Freeman is a student at Howard University in Washington.