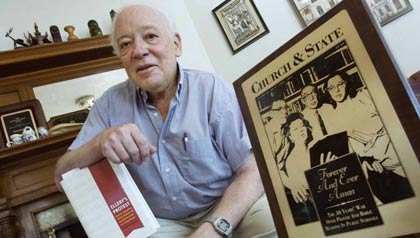 On Nov. 26, 1956, then-16-year-old Ellery Schempp protested his Philadelphia-area high school's daily Bible reading and prayers by bringing a borrowed Koran to school and silently reading it, rather than the Bible, during morning devotions. Later that day he refused to stand for the Lord's Prayer.

His actions would have far-reaching ramifications.

"I remember it as if it were yesterday," he told the AARP Bulletin in a telephone interview from his home near Boston. "I had no interest in Islam, and I didn't know anything about it. I only wanted to show that there were other holy books in the world than the Bible."

When his teacher confronted him, Schempp (who was then known as Ellory, but changed his first name in adulthood) explained that as a matter of religious conscience he could no longer participate in Bible readings and prayers. Speechless, the teacher sent Schempp to an equally dumbfounded principal, who passed him on to a guidance counselor, who sent him back to class without disciplining him.

"One of several motivations was a sense of fairness because I knew that there were a number of Jewish kids in the class, and they were clearly uncomfortable," Schempp recalled.

He'd been inspired by his honors English teacher, Alan A. Glatthorn, who assigned readings on civil disobedience by Thoreau and who, Schempp said, made "thinking respectable." (Glatthorn died in 2007.) He also had the full backing of his liberal Unitarian parents.

That night, young Schempp wrote a letter to the American Civil Liberties Union asking for its help. Although he was never forced to take part in prayers or Bible readings after his protest, he had to sit in his guidance counselor's office for the 15 minutes or so that it took the homeroom class to complete the Bible readings and prayers. He didn't have to take part in any of the devotions, but he could hear them over the public address system.

His parents filed a suit against the school district complaining that the devotional practices "interfere with their right to give their children a religious education of their own choosing and according to their own religious beliefs, and that certain beliefs are fostered by such practices which are contradictory to what they have taught and intend to teach their children.

Next: The family suffers harassment. >>

The ACLU took the case, and it was eventually combined with one brought by avowed atheist Madalyn Murray O'Hair under the name School District of Abington Township, Pennsylvania v. Schempp.

On June 17, 1963, the Supreme Court handed down its 8-1 decision. "In the relationship between man and religion," Justice Tom C. Clark wrote in his majority opinion, "the State is firmly committed to a position of neutrality." The decision banned mandatory Bible reading and prayer in public schools and was significant because it said prohibitions against establishment of religion were applicable to the states. It precipitated a wave of proposals to amend the Constitution.

The repercussions to the family were immediate. Schempp's principal, a lay minister in the Methodist Church, "disrecommended" him for colleges he applied to. His younger sister, Donna, was worried about what her friends would think and ultimately found the lawsuit a "searing" experience, Schempp said. His younger brother, Roger, was "pushed around" several times at school and called a "communist" and the "Antichrist." Students on the school bus would yell, "Now passing the commie camp" as it rolled past the family's house. The Schempps received more than 5,000 letters and answered every one that included a return address. About one-third of them, Schempp said, were hate-filled. Several times, the family came home to find excrement smeared on the front door.

Despite the machinations of his principal, Schempp went on to Tufts University, then to Brown University for his doctorate in physics. He worked for Bell Telephone Laboratories and then for General Electric Medical, where he was part of the group that developed magnetic resonance imaging. He retired in 2002.

Next: No regrets about the lawsuit. >>

Today, Schempp, now 70, says he's considered the "grand old man of separation of church and state." He writes articles and lectures frequently. Although he's in good health, he suffers from a bit of arthritis in an ankle he broke during a mountain-climbing accident in Pakistan years ago.

Twice divorced, he is engaged to Arlene Germain, president of Massachusetts Advocates for Nursing Home Reform. He has no children. "Late in life I began to regret this," he explained. "I was so active in other things it didn't seem important at the time."

He and Germain are active in the Bedford Unitarian Universalist church near their home. He considers himself an atheist, and cherishes the Unitarian Universalist Church for encouraging freedom of thought and conscience. The couple travel regularly, often piggybacking on Schempp's speaking engagements, and are making plans to visit France and Germany this summer.

Several years ago, New York University professor Stephen Solomon's book Ellery's Protest: How One Young Man Defied Tradition and Sparked the Battle Over School Prayer was published. Now Schempp is writing his own book, which he hopes will be done by 2013, the 50th anniversary of the Supreme Court decision.