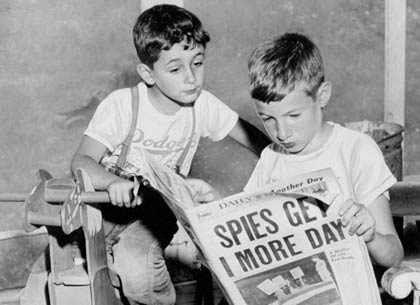 Michael Meeropol reads about his parents as brother Robert looks on.

Except for vague impressions of living in a tiny apartment with a warm and loving family, Robert Meeropol remembers very little about his parents, Julius and Ethel Rosenberg, sentenced to death 59 years ago today for passing atomic bomb secrets to the Soviets.

Meeropol, who was 3 when his parents were arrested, says his first real memories of his parents were of the times he visited them in prison. Rather than being traumatic, those visits were comforting, he recalls.

The Rosenbergs’ impending executions prompted protests worldwide. Robert, then 6, and his brother Michael, 10, also demonstrated with their grandmother at the White House just days before their parents were put to death in the electric chair in the summer of 1953.

“I doubt I fully comprehended that my parents had just been killed, but I feigned complete ignorance to avoid the commotion, and went to bed,” Robert Meeropol recalled in his 2003 memoir, An Execution in the Family.

In the years after their parents’ arrest, the boys were shuffled between grandparents, friends and a shelter. After the executions, Rosenberg supporters Anne and Abel Meeropol adopted them. Anne had given birth to a stillborn child, and the couple was unable to have children of their own.

They lived happily and anonymously on the upper west side of Manhattan, a circumstance Meeropol considers remarkable.

“From 1954 to 1973,” he says, “there is not one word written about Michael and Robert Rosenberg. There’s no exposure. There’s no confrontation. How could that happen today?”

In 1973, the brothers came out as the Rosenbergs’ sons when they sued famed trial lawyer Louis Nizer for copyright violations after he published their parents’ prison letters. After six years of wrangling, the case was settled out of court.

They grew up believing in their parents’ innocence, but by the mid-1980s, as more details of the case became public, they began to have their doubts.

A blockbuster revelation came in 2008 when Morton Sobell, convicted with the Rosenbergs, admitted to the New York Times that he had been a spy and implicated Julius Rosenberg. While Ethel knew what Julius was doing, Sobell said, she was guilty only of being Julius’ wife.

Today, Meeropol says, the overwhelming evidence is that his father may have passed some type of “military industrial” information—not atomic bomb secrets—to the Soviets, but that his mother was innocent.

“The thing that I want the American public to understand about my parents’ case,” Meeropol says, “Is that the idea that somehow all the evidence that Julius was guilty means that the government wasn’t wrong in what it did is a vast oversimplification and rationalization of the execution of two people for a crime they didn’t commit.”

Meeropol became a corporate lawyer, but never enjoyed it. In his memoir, he says, “I gained no satisfaction from having my businessman get the better of the other attorney’s businessman.” He disliked the work so much he had problems sleeping, couldn’t eat, and sought therapy. He left the firm in the late 1980s. Shortly afterward, he fulfilled his dream of starting a fund in his parents’ name, the Rosenberg Fund for Children.

For 20 years, the foundation—which has awarded more than $3.5 million in grants to the children of progressive activists who have been harassed or jailed—has given him a way to engage in “constructive revenge,” a philosophy that’s now central to his life.

There are healthy aspects to the desire for revenge, he explains, because that leads to the impulse to be active. But the problem is that revenge can also be destructive.

“So, how do you harness that energy in a positive direction?” he asks. “The Rosenberg Fund for Children, which is my effort to help families who are today living the kind of nightmare that my family lived when I was a child, that’s a constructive way of harnessing that revenge.”

Both Rosenberg sons are now grandfathers. Michael Meeropol recently retired from Western New England College in Springfield, Mass., where he had been an economics professor for almost 40 years. He now has a one-year appointment at John Jay College in New York City to be near his grandchildren, who live in the lower Hudson Valley. His daughter, Ivy, produced a documentary about the case, Heir to an Execution, in 2004.

Robert Meeropol also plans to retire in a few years and turn the foundation over to his older daughter, Jennifer. He lives in Massachusetts with his wife, Elli, a retired pediatric nurse practitioner. Rachel, their younger daughter, is an attorney with the Center for Constitutional Rights, and her 2-year-old daughter is their first grandchild.

“I found my positive outlet when I founded the Rosenberg Fund for Children, and that’s what I needed,” Robert Meeropol says.