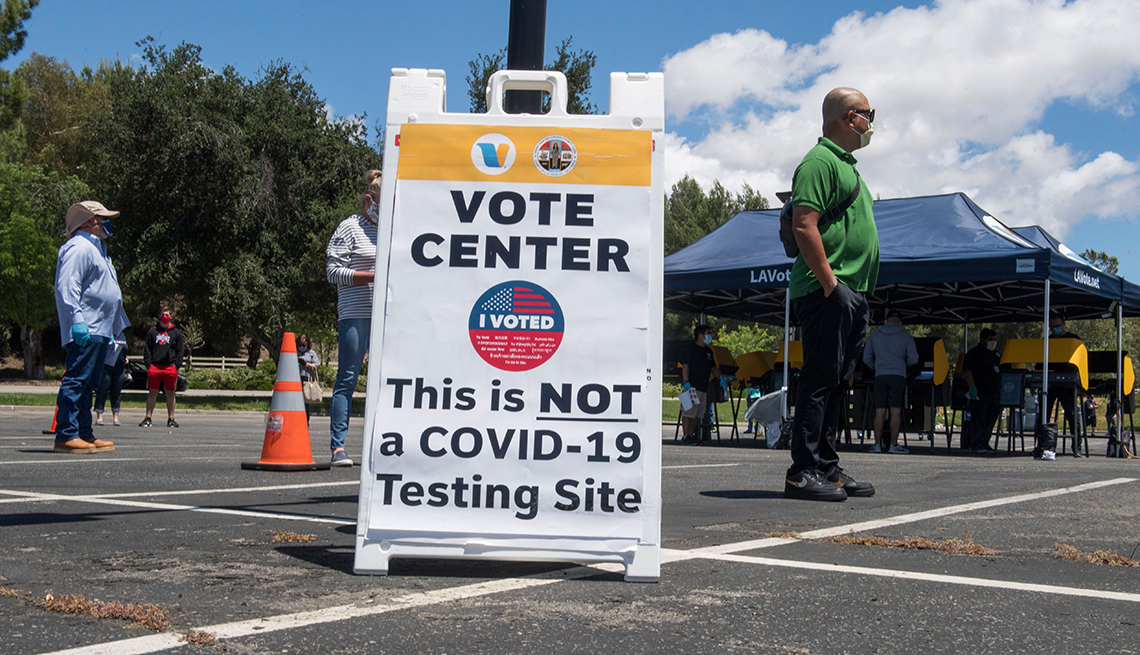 People wait to cast their votes at a polling station in Santa Clarita, California.

En español | Older voters have long said that access to affordable health care is one of their top priorities. Then came the greatest health crisis in generations.

But the coronavirus pandemic is a complex issue. As of early July, COVID-19 had stricken more than 2.9 million people in the U.S. and cost nearly 130,000 American lives. And no one expects it to be contained before Election Day. At the same time, the pandemic has sidelined tens of millions of workers and threatened the future of countless businesses.

Then, in late May, came a third national crisis, when hundreds of thousands of Americans of all ages took to the streets after the death of George Floyd, an African American whom, a video showed, a Minneapolis police officer pinned down by keeping his knee on Floyd's neck for more than eight minutes.

So, will it still be health care that drives voters in their election decisions this November? Will the cries for criminal justice reform keep up until the election? Will that iconic phrase from campaigns past — “It's the economy, stupid” — resonate again? Or, as older voters go to the polls in what's expected to be record numbers, will they focus less on individual issues and more broadly on leadership and vision?

Interviews with a cross section of older voters, plus fresh polling data, suggest the answer is all of the above: Voters are evaluating candidates through a different lens than they might have absent the pandemic or racial-justice protests.

A call for unity

"Let's face it, the landscape has changed permanently,” says Francis Hessing, a retired airline corporate trainer who lives in Anchorage, Alaska. A Democrat, Hessing, 58, says for him the issue in this campaign is honesty. “Now with the pandemic, it's even more about honesty going forward,” he says.

"To me, we have three national emergencies now,” says Chris Bowers, 56, a Dallas lawyer and self-described lifelong Republican. “The first one is coronavirus. The second one is our country's economy. And then the third is the riots and the responses.” Bowers is looking for elected officials “all the way from the local level to our president to unite our country” and wants candidates who “express clearly that everybody in America should be treated equally, fairly and with justice. That message is not being clearly articulated now."

Terry Madonna, director of the Franklin & Marshall College Poll in Pennsylvania, predicts that the election “is, number one, going to be dominated by how President Trump handled the coronavirus; number two, the status of the economy; and number three, the debate over police reform.” Still, Madonna says, health care is likely to remain a top-tier issue, particularly for senior voters.

For Darlene Walker, 65, a legal administrative assistant in Chicago, health care was always a predominant issue. The pandemic, she says, “makes me even more interested in the belief that health care should be decoupled from employment and should be universal."

By June more than 40 million Americans were unemployed, and the Kaiser Family Foundation said that 27 million people could lose their employer-based health insurance. 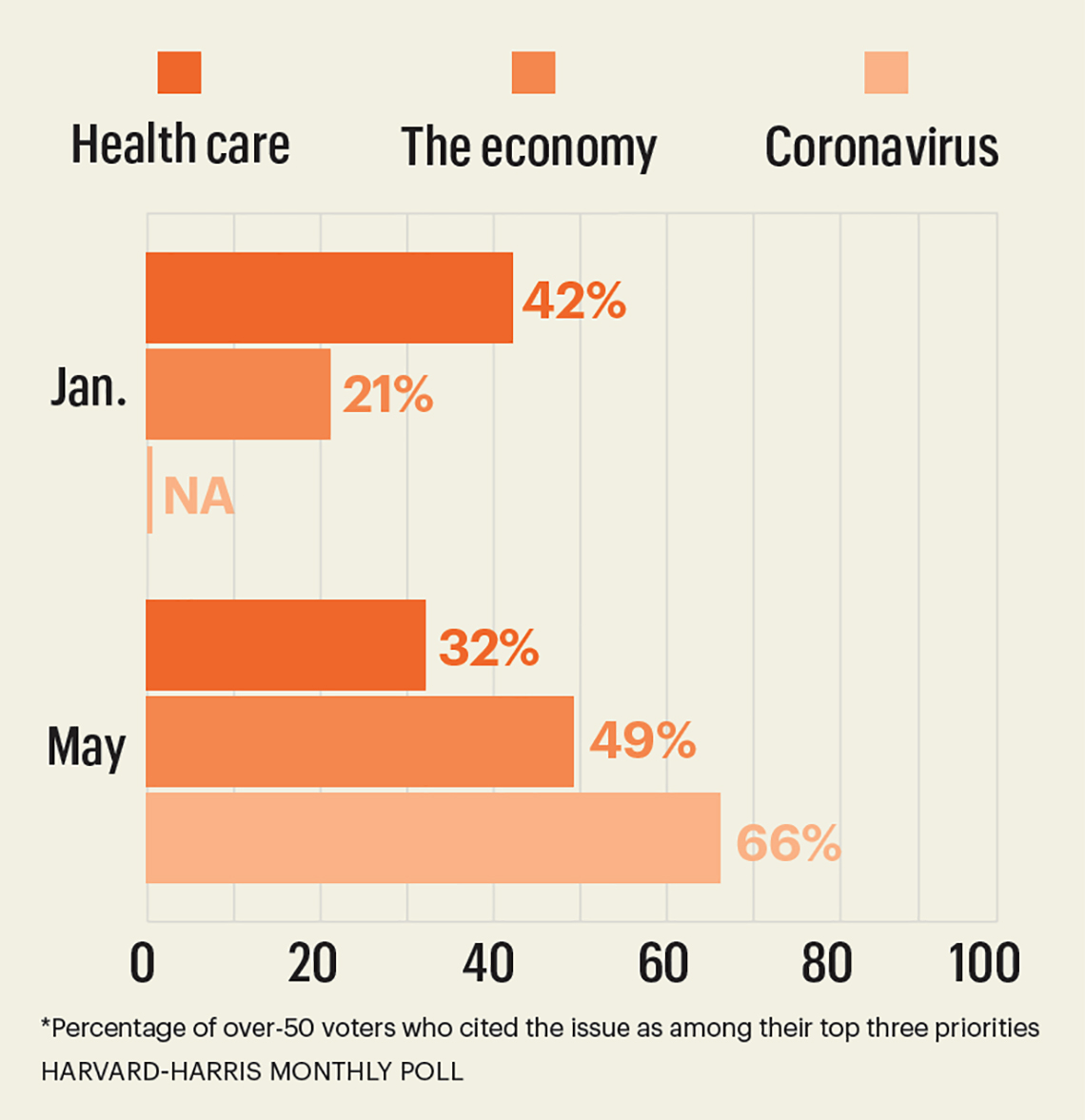 Ironically, “health care was becoming a more bipartisan issue” before the pandemic, notes Brock McCleary, president of Harper Polling. Now, he believes, it has become polarizing again. Folks who identify as “center-left or Democrats are talking more about the public health and safety concerns related to the virus,” he says, “while those who are center-right or Republican are more concerned about this big gorilla being an economic concern."

President Trump has handled the pandemic “as well as anybody on this planet,” says Tom Hirsch, 73, a Republican and retired salesman from Palm Harbor, Florida. He says the coronavirus and the criminal justice protests have reinforced his belief that the country needs a strong leader to protect its security.

Ginnette Glover-Harris, 68, a retired teacher whose family has a contracting business in Sacramento, California, feels the tug between wanting her loved ones to get back to work and the importance of letting science drive public-health decisions.

"We need science to guide us as we bring the economy back,” says Glover-Harris, a Democrat. “But, obviously, we have to bring it back or the whole country is going to go bankrupt."

Focus on the future

Some voters are zeroing in on candidates who offer future solutions. “We need to look at what we're going to do so that the next time there's a virus like this, we will be more prepared,” says John Vasquez, 65, a retired judge from Austin, Texas, and an independent. “Somebody who is running needs to explain how they are going to have a plan in place for other pandemics."

For Stacy DaSilva, 50, of Dublin, Ohio, preparing for the next one means electing leaders “who can work with both sides of the aisle. I want someone who's gonna put our country first — not themselves and not their party first."

DaSilva, a Democrat who processes nursing home admissions, is focused on those most vulnerable to illness. “The candidate I'd vote for is going to have to put more priority on older and more fragile populations."