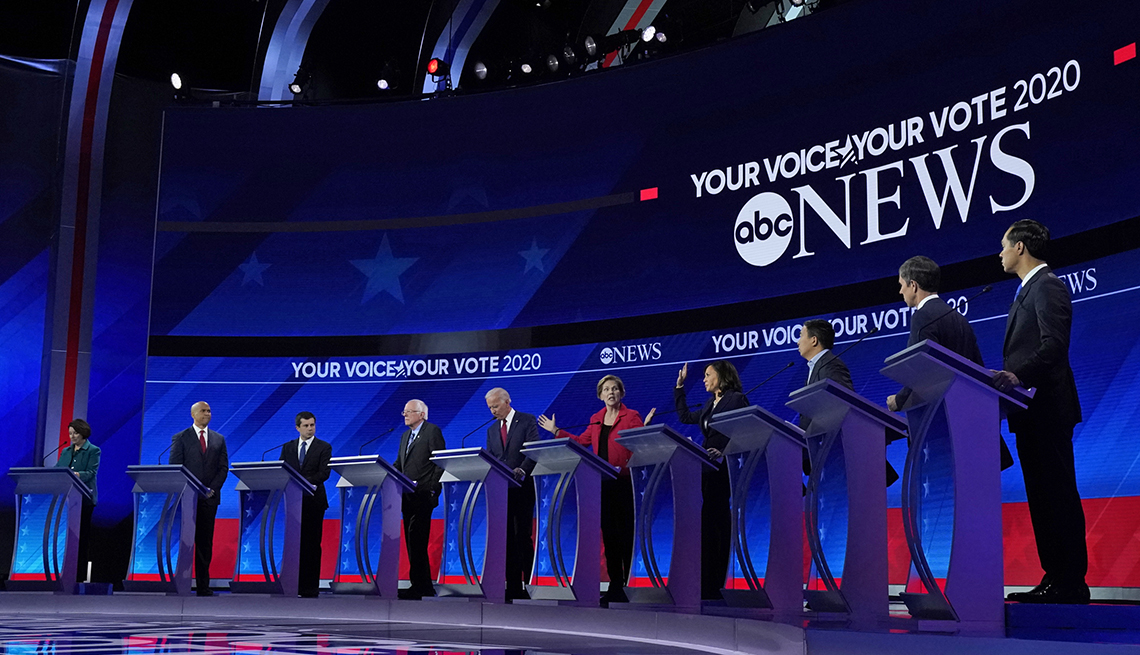 En español | The dominance of health insurance as an issue in the 2020 presidential campaign was evident again Thursday when the need to cover all Americans was the first topic 10 Democratic hopefuls tackled in the debate at Texas Southern University in Houston.

The candidates remain divided between those who would eliminate private health insurance and replace it with a “Medicare for All” system and those who prefer a buy-in to Medicare as an option — keeping commercial policies for those who like the insurance they have.

Vermont Sen. Bernie Sanders, who authored the first Medicare for All measure, and Massachusetts Sen. Elizabeth Warren, who supports it, want to do away with private insurance. South Bend, Indiana, Mayor Pete Buttigieg and entrepreneur Andrew Yang have said they would maintain private plans initially but believe the country will inexorably move toward Medicare for All,  also called a single payer system.

“I think Obamacare worked,” said Biden, referring to the Affordable Care Act (ACA). Biden said he wants to “replace everything that has been cut, add a public option guarantee that everyone will be able to have affordable insurance.” But, Biden said, “of the 160 million people who like their health care now, they can keep it. If they don’t like it, they can leave.” 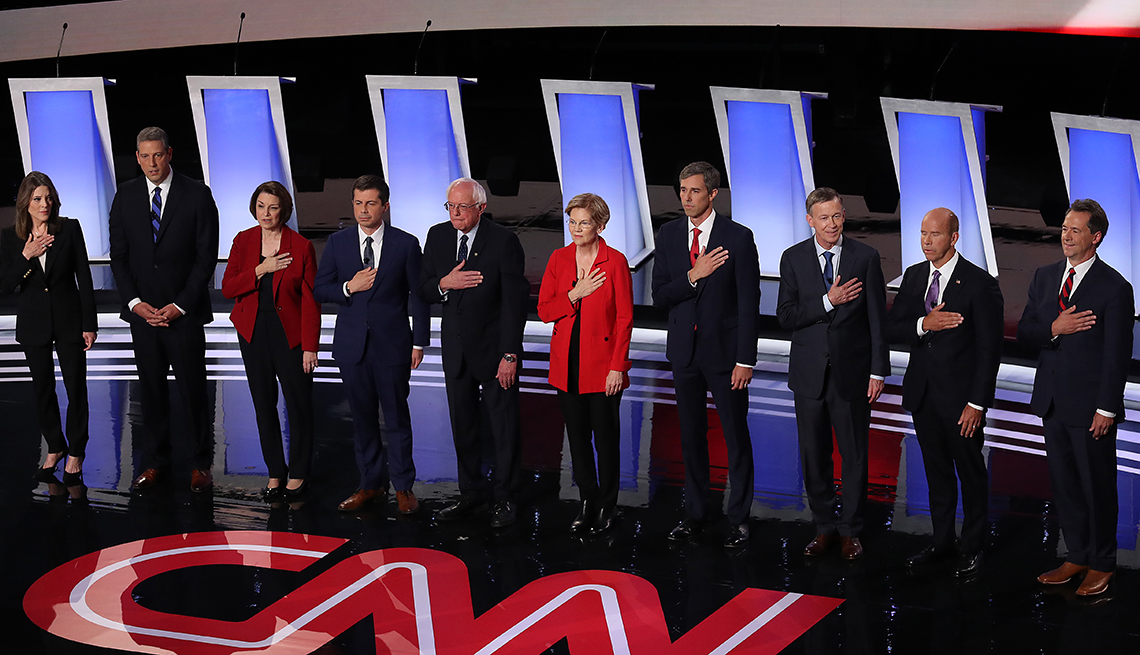 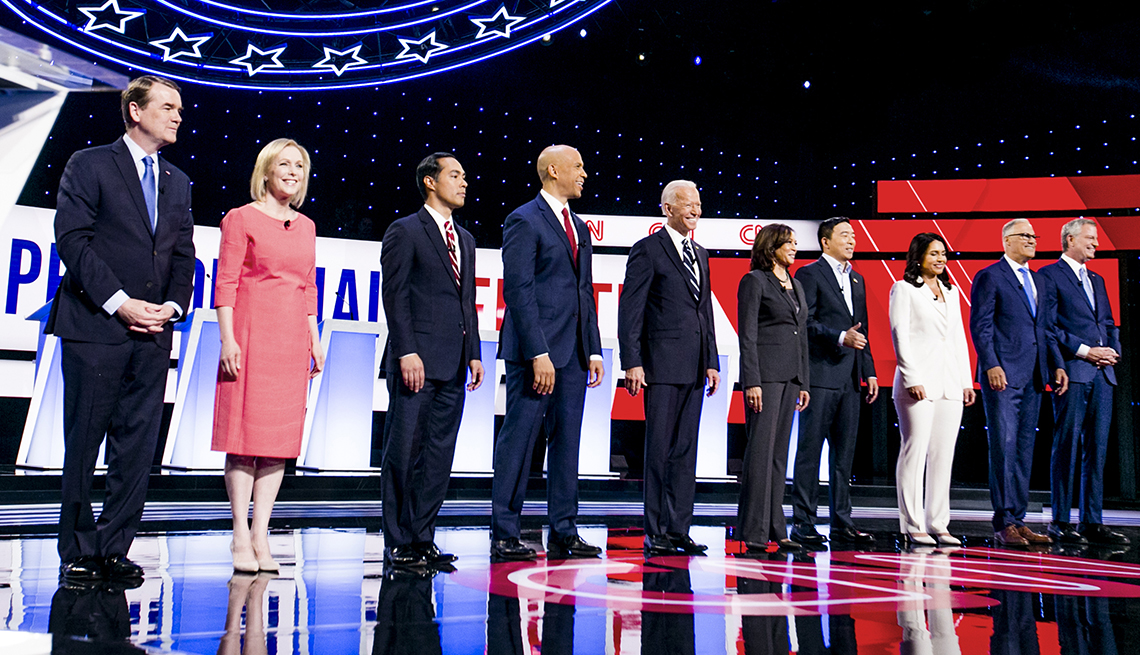 Warren said the way to improve on the ACA is with Medicare for All and that costs would go up for the wealthy and giant corporations and total health care costs would go down for the middle class under her version of that plan. “Instead of paying premiums into insurance companies and then having insurance companies build their profits by saying no to coverage, we’re going to do this by saying everyone is covered by Medicare for All.”

Sanders has said he would raise taxes to help pay for Medicare for All. The Vermont senator says he intends “to eliminate all out-of-pocket expenses, all deductibles, all copayments. Nobody in America will pay more than $200 a year for prescription drugs, because we’re going to stand up to the greed and corruption and price-fixing of the pharmaceutical industry.”

Klobuchar said her view of how to structure health insurance premiums is to “go with the doctor’s creed, which is, do no harm.” She said eliminating private insurance for the millions of Americans is “a bad idea. And what I favor is something that Barack Obama wanted to do from the very beginning. And that is a public option, a nonprofit choice that would bring down the cost of insurance, cover 12 million more people, and bring down the prices for 13 million more people.”

The latest U.S. Census report, released this week, showed an uptick in the number of uninsured Americans, putting the number of people without coverage at 27.5 million in 2018.

Harris says under her Medicare for All plan, “people have the choice of a private plan or a public plan, because that’s what people want. And I agree, we shouldn’t take choice from people.” What Americans want to know, Harris said, “is that they’re going to have health care, and cost will not be a barrier to getting it.”

Under O’Rourke’s Medicare for America plan, anyone who is uninsured would be automatically enrolled in Medicare and “everyone who’s insufficiently insured, cannot afford it, can move over to Medicare,” O’Rourke said. “And those, like members of unions who’ve fought for the health care plans that work for them and their families, are able to keep them.”

Castro sparred with Biden over whether uninsured people would have to opt in to Biden’s Medicare public option or be automatically enrolled as in his plan. “I want every single American family to have a strong Medicare plan available,” Castro said. Biden said that if someone had a low enough income to qualify for Medicaid — the federal-state health plan for low income Americans — they would automatically be enrolled in his public option.

Booker said that many Americans have health insurance that “doesn’t go far enough. They can’t afford their prescription drugs.” Booker said Medicare for All “is the best way to rationalize the system,” but added that “I know every one of my colleagues on this stage is in favor of universal health coverage and comes at this with the best of intentions.”

Ten candidates qualified for Thursday’s debate by meeting the Democratic National Committee’s benchmarks of having 130,000 individual donors and polling at least 2 percent in four public surveys. The rules are the same for the next debate on Oct. 15., with the added requirement that candidates have at least 400 donors in each of at least 20 states.