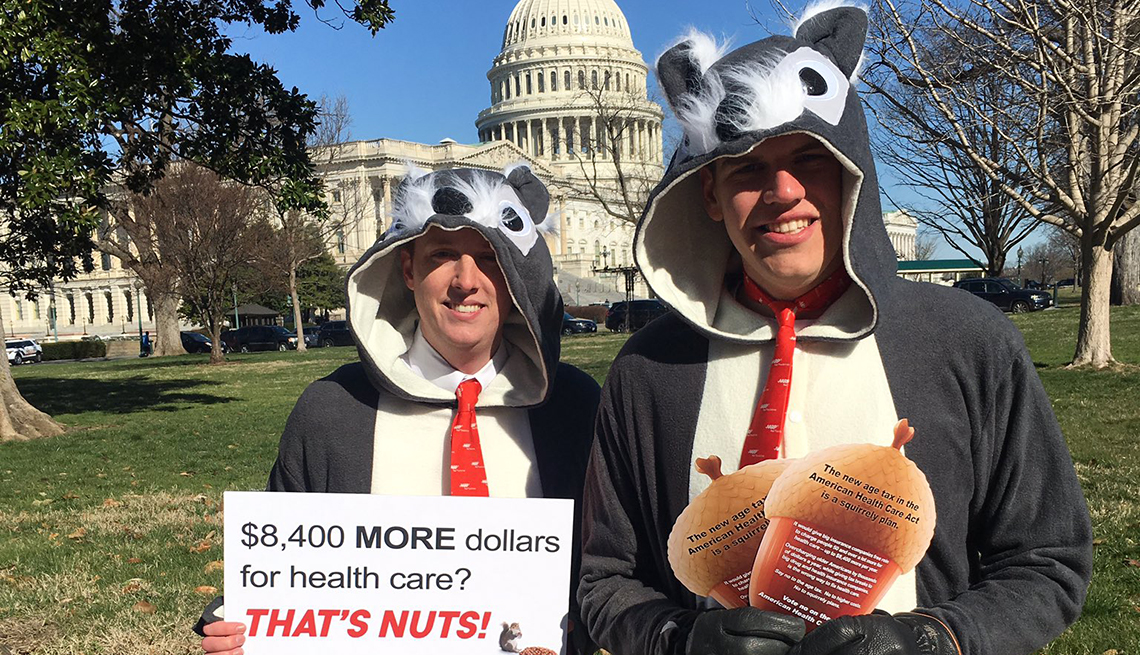 AARP staffers pass out flyers urging Congress to vote no on the American Health Care Act.

In the rush of morning commuters heading to Capitol Hill on Thursday morning, it was hard not to notice the two giant squirrels handing out acorn-shaped literature.

They were AARP staffers in squirrel suits urging passersby to oppose the American Health Care Act (AHCA), the bill that the House is poised to consider Thursday evening. AARP opposes the bill, saying it would impose an “age tax” on older Americans.

“The new age tax in the American Health Care Act (AHCA) is a squirrelly plan,” said the flyer that the life-size rodents were handing out to Hill staff members. On behalf of AARP and its 38 million members, the squirrels were urging members of Congress to vote no.

Tell Congress to vote NO on the American Health Care Act!

Here’s the backstory: Charlie the Squirrel had his moment of internet fame after he was featured in an AARP video that was viewed by more than 3 million people on Facebook.

The video explained AARP’s opposition to the AHCA’s “age tax” that would drive up premiums for older Americans. “It would give big insurance companies free rein to charge people 50 and older a lot more for health care — up to $8,400,” according to AARP.

So on the morning of the day that the AHCA is expected to go to the House floor for a vote, two life-size Charlies decided to take advantage of his newfound celebrity to drive that message home.

“The age tax is nuts,” said one, as throngs of commuters hurried by.

“This is a squirrelly plan,” said another.

AARP has made the House vote on AHCA an “accountability vote,” meaning that the association will let its members know how each member of Congress voted on this measure.