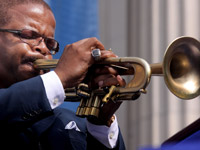 When Terence Blanchard and Spike Lee collaborated on Lee's documentary When the Levees Broke, about the aftermath of Hurricane Katrina, it was an intensely personal experience for Blanchard. Lee filmed the musician and his mother as they were entering her house during their first visit after the storm. Listen

In this second excerpt from a conversation in 2007, Blanchard talks about his creative collaborations with Spike Lee, as well as why he believes Lee's ability to tell compelling stories about the hurricane's aftermath confirms that the director is more than just a filmmaker. Blanchard's music for Lee's film eventually grew into an album titled A Tale of God's Will: A Requiem for Katrina. Listen 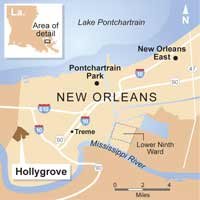 Since Hurricane Katrina decimated his hometown, Grammy-winning jazz trumpeter and composer Terence Blanchard has observed, sometimes impatiently, New Orleans' slow recovery. Acknowledging the pain inflicted by the disaster, Blanchard nevertheless insists that Katrina helped shine a light on many of the ills that plagued the city before the hurricane hit.

Much of the attention directed to the city has benefited its underserved areas, such as the Lower Ninth Ward and the Treme (pronounced "truh-MAY") neighborhood. For example, builders are raising some residents' homes off basic slab foundations to minimize the impact of future flooding. Those areas will also benefit from the commitment from new Mayor Mitch Landrieu and his handpicked chief of police, Ronal Serpas, to clean up a police force that has been the subject of ongoing federal investigations since the storm.

During his trips throughout the city, Blanchard has heard heartfelt testimonies about recovery efforts. Many fans tell him that his music has set them on a path to emotional healing. One person who lost a friend during Katrina told Blanchard: “I came to your show and listened … and I cried like a baby. It helped me start the grieving process.”

Even while working in Los Angeles last year on the Disney film The Princess and the Frog, to which Blanchard contributed his compositions and vocal talent, the musician was often stopped by fans who wanted to talk about efforts to rebuild New Orleans. A bellhop, he recalls, described traveling with his church group all the way from the West Coast to the Gulf Coast to offer aid.

This sort of goodwill, Blanchard says, has made New Orleans a better city. Meanwhile, Blanchard has written the score for Spike Lee's update on the Katrina story — a new HBO documentary called If God Is Willing, and da Creek Don't Rise, premiering on Aug. 23.