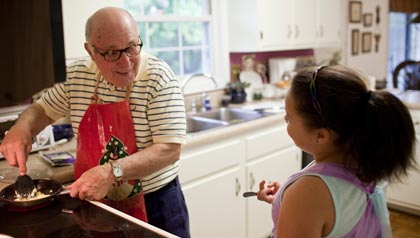 Val Coluni, of Blacksburg, shown with granddaughter Sabriah Coluni, was part of a successful AARP lobbying effort to repeal a law that cut unemployment payments to people receiving Social Security.

Val Coluni has always believed in fairness. So it was natural for the Blacksburg resident to contact Virginia lawmakers when unemployment benefits for people drawing Social Security were cut last year.

Coluni, 77, a human resources professional for 35 years, joined a contingent of AARP members earlier this year in an effort to repeal the so-called offset law that required the reductions.

And the Virginia General Assembly complied, repealing the provision unanimously.

The benefit reductions began in January 2010 when the unemployment insurance fund's reserve dropped so low that it triggered a state law cutting unemployment payments to Social Security recipients.

By October, about 30,000 jobless Virginians had been affected, according to Don Lillywhite, the Virginia Employment Commission's research director. An additional 4,000, including Coluni, were no longer eligible for any unemployment benefits.

"I was very angry about it," Coluni said. "I just didn't feel it measured up to my concept of fairness and equity." He joined the repeal effort organized by AARP Virginia, participating in weekly strategy sessions by telephone.

"It obviously became our major legislative priority to get the offset repealed," he said.

About 120 AARP members, many wearing red scarves and "Be Fair" buttons bearing the AARP logo, showed up Jan. 25 at the state Capitol urging lawmakers to support the repeal.

Cynthia Mitchell had never been involved in lobbying for legislation, but she felt strongly enough to make the 80-mile trip from her Ruckersville home to the Capitol twice. Mitchell, 69, has a temporary job now, but said she could have lost her home when her unemployment benefit was cut nearly in half to $194 a week.

Mitchell was one of two members who attended a state Senate committee meeting to urge the repeal. "I think seeing people who care enough to show up makes a difference," she said.

Delegate Jennifer McClellan, D-Richmond, sponsored a bill to repeal the law at AARP's request. The Senate version, which ultimately passed, was filed on the recommendation of the state Unemployment Compensation Commission, said its sponsor, Sen. John C. Watkins, R-Powhatan.

DeBiasi called the legislation's easy passage amazing. "Initially we had quite a bit of pushback," he said.

Some legislators had been reluctant to raise taxes on employers in a struggling economy, but DeBiasi said they changed their minds when they learned the effect would be minimal. An unemployment commission analysis showed repeal of the offset would cost only 69 cents per employee per year.

Alex Kortiak of Arlington was laid off from his job as a computer programmer two years ago. His unemployment compensation will end soon, so he won't benefit from the repeal, which takes effect July 1. But he's glad he was part of the successful lobbying effort.

"It will help others in the future," said Kortiak, who turns 75 this month. "The way the economy is, people are not going to retire at 65 like they did. They'll keep working."

Sue Lindsey is a freelance writer living in Roanoke.