In 1997, Jenny Bowen and her husband adopted a little girl from China.  She’ll never forget her first visit to the orphanage where their daughter had lived. “We walked through room after room of children who were languishing, who didn’t have stimulation, whose lives were really empty,” Bowen recalls. “My first reaction was anger. Children shouldn’t live like this. How could this happen at this moment in their lives when they should be adored? My impulse was to sweep them all up and just take them way.” 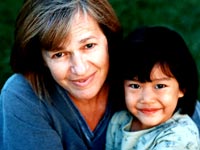 Jenny Bowen’s organization, Half the Sky, is helping to create better lives for orphan children from birth to adulthood.

After bringing their daughter to the United States, the Bowens discovered that she couldn’t walk, had no language skills and was emotionally shut off. But after just a year of care and loving stimulation, this little girl flourished into a bright, beautiful and happy child.

“I realized that you could maybe sweep up a few children, but how many could you help?” Bowen says. “The only way you could make a difference would be to change the system.”

After connecting with other adoptive parents, Bowen reached out to the Chinese government and persuaded authorities to launch a pilot program to train child-care workers. More than a decade later, Bowen’s organization, Half the Sky, has trained 2,000 people, with centers in every province in China. Now, Half the Sky is helping to create better lives for orphan children from birth to adulthood.

My Generation sat down with a woman who’s on a mission to reshape the way China cares for its most vulnerable members.

You may also like: Aging in China: Two generations.