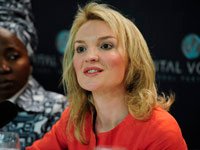 Alyse Nelson is president and CEO of Vital Voices, an organization empowering women to be leaders.

Alyse Nelson is president and CEO of Vital Voices, a group that encourages and empowers women to take on leadership roles around the world. As March is Women's History Month, AARP Radio host Mike Cuthbert talked to Nelson about her work with the nonprofit organization, which was founded after publication of the Vital Voices Democracy Initiative in 1997 by then-first lady Hillary Clinton and then-Secretary of State Madeleine Albright.

"What we do is find the leaders in countries around the world who have a bold vision for change," explains Nelson, "and provide them with those things they need to take that vision to scale."

Industries and global relations are changing with more and more women in positions of authority. Among the many reasons that's a good trend, says Nelson: "Women think outside the box, because we don't even know what the box looks like."