En español | The government announced first-of-its-kind steps Tuesday to stop hundreds of millions of predatory robocalls every month from entering the U.S. to perpetrate costly impostor scams against Americans, including many older victims.

The groundbreaking civil actions are aimed at shutting down firms in Long Island, New York, and Scottsdale, Arizona, that provide internet services and act as “gateway carriers” for calls from overseas, mostly from India, Department of Justice (DOJ) officials said.

In impostor scams, criminals pose as representatives of the Social Security Administration, the Internal Revenue Service, U.S. Immigration and Customs Enforcement or another agency, in a bid to trick people into giving them money under threat or as a remedy for a bogus problem. The threats include arrest and court actions and are “often terrifying,” and they are “terrifyingly successful,” said Assistant U.S. Attorney General Jody Hunt. In 2019 alone, the Federal Trade Commission heard more than 400,000 complaints of impostor scams resulting in more than $150 million in losses, Hunt said, mostly to older victims.

The actions are against five companies and three people who are principals of the firms. One of the accused firms allegedly carried 720 million calls during a 23-day period, and more than 425 million of those calls lasted less than a second, indicating they were robocalls, officials said. The calls involved “spoofed” phone numbers that disguise on caller ID the true identity of the caller.

"Robocalls are an annoyance to many Americans, and those that are fraudulent and predatory are a serious problem, often causing devastating financial harm to the elderly and vulnerable members of our society,” Hunt said.

Antoinette Bacon, an associate deputy attorney general and coordinator of DOJ's National Elder Justice Initiative, said: “When the phone rings, American seniors should not have to worry, ‘Is it a friend, or is it a fraudster?’ And today we're one step closer to shutting out the transnational criminal organizations who victimize American seniors.”

One of the actions is against Ecommerce National LLC, which operates under a variety of names and is owned by Nicholas Palumbo, 38, and Natasha Palumbo, 33, of Scottsdale. The other is against Global Voicecom Inc., which also did business using other names and is owned and operated by Jon Kahen, 45, of Great Neck, New York. Government lawyers were seeking temporary restraining orders in court as a first step in shutting down the operations. Shuttering the businesses would not mean an end to robocalls but would represent an “enormous step forward,” Hunt said. 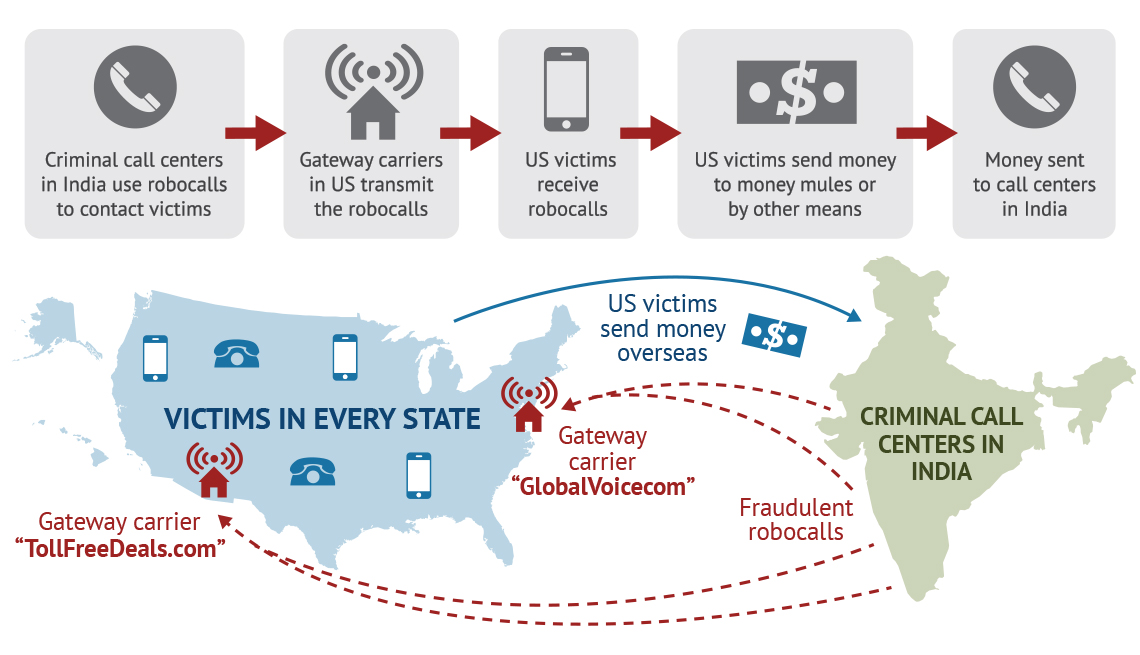 The landmark actions come after Americans in 2019 endured a record-shattering 58.5 billion robocalls, of which 25.9 billion, or 44 percent, were scams, according to industry estimates provided by YouMail, an Irvine, California, firm that offers robocall blocking services. Of the non-scam calls, YouMail said alerts and reminders accounted for 13 billion; financial reminders, 11.4 billion; and telemarketers, 8 billion.

In announcing the civil actions, other federal officials who addressed reporters about the ongoing investigation included Gail Ennis, the inspector general for the Social Security Administration, and Gary Barksdale, the chief of the United States Postal Inspection Service, the law enforcement arm of the post office.

At the end of 2019, the president signed a law, known as the TRACED Act, to crack down on illegal robocalls. It enhanced the power of the Federal Communications Commission and required the agency to report repeated robocall violations to the Justice Department. Criminal prosecutions are a tool only if officials find the robocalls were intended to defraud, cause harm or wrongfully obtain anything of value. The actions announced Tuesday are civil matters, but officials did not rule out filing criminal charges as well.

Federal officials on Tuesday also urged Americans to report calls from impostors and other scams to law enforcement.

To avoid impostor scams, they said: